Our June 17th auction is a Royal knockout!

A pair of adorable Liberty silk dresses, worn by the young Princesses Elizabeth and Margaret in 1935, are some of the most photographed garments of that time. In peach and blue floral print, they come with matching knickers and are trimmed with fine organdie frills. The girls wore the outfits when taken to the Lyceum Theatre by their parents in 1935 – with little Margaret seemingly transfixed by the stage.  Other dresses include a pink rayon dress, c.1934-5 (probably worn by young Elizabeth), which to modern eyes might seem garish and fussy, but at the time was the height of fashion, with synthetic fibres being seen as very modern and chic. These clothes were given to Clara (Allah) Knight, who worked as the Royal nanny from 1926, having formerly looked after their mother as a child – Elizabeth Bowes Lyons.

It’s interesting to note how this style of dressing Royal children has changed little over the decades, as illustrated by a recent photograph of Princess Charlotte wearing a similar, traditional, floral dress with contrasting Peter Pan collar. 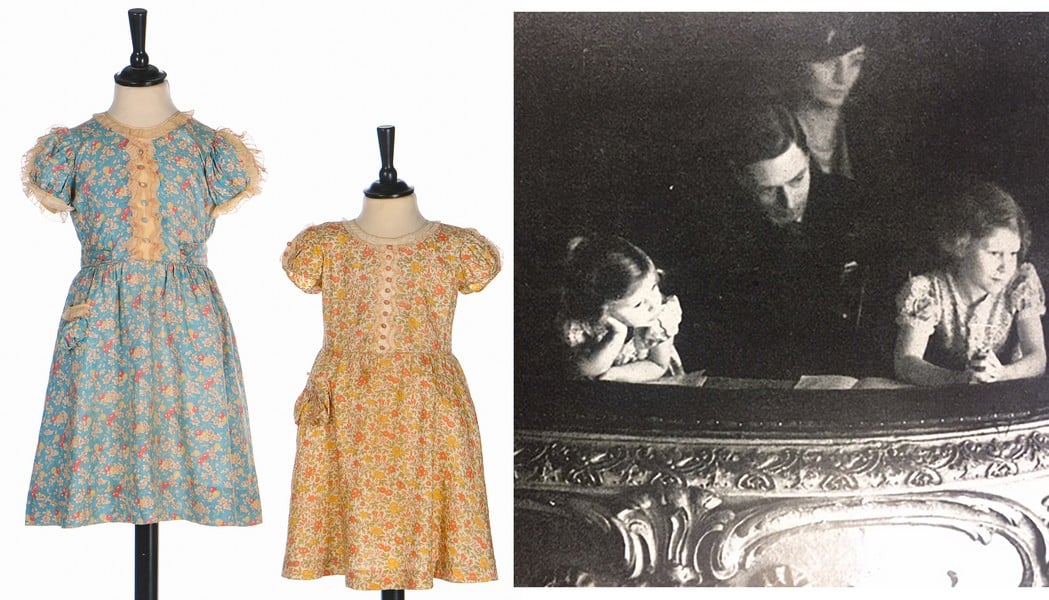 Lot 17, a Georgian silver gilt snuff box, reminds us of the love affair that triggered the Abdication Crisis, which led to the shy Duke of York and his family being thrust into the public eye when he was crowned King in his brother’s stead in 1936. The silver box was given as a Christmas present to Herman and Katherine Rogers (lifelong Canadian friends who helped Prince Edward and Wallis Simpson arrange their wedding in France the following year) and is engraved ‘from Wallis and Edward, Christmas 1948’ (see image at top of page).

Although the Princess’ more elaborate evening gowns have survived in relatively large numbers, her daywear is seldom found, as she gave outfits to friends or to charity shops or dress agencies. The Princess could transform an outfit by simply changing her hat, shoes and blouse.

Lot 20, the striking red wool suit by Jasper Conran, was worn to the official naming ceremony of the P&O cruise liner ‘Royal Princess’, christened in her honour, on 5th November 1984. On that occasion, she wore it with a jaunty red felt beret with black headband, black blouse with bow ties, black tights, leather clutch and shoes. She wore it again on 22nd February 1985, on a visit to Cirencester Police Station. This time she accessorised with a scarlet boater, white blouse with wing collar, black bow tie, red tights, black leather clutch and shoes, creating an entirely different look. Mr Conran has confirmed that this ensemble was a one-off design, made exclusively for the Princess. 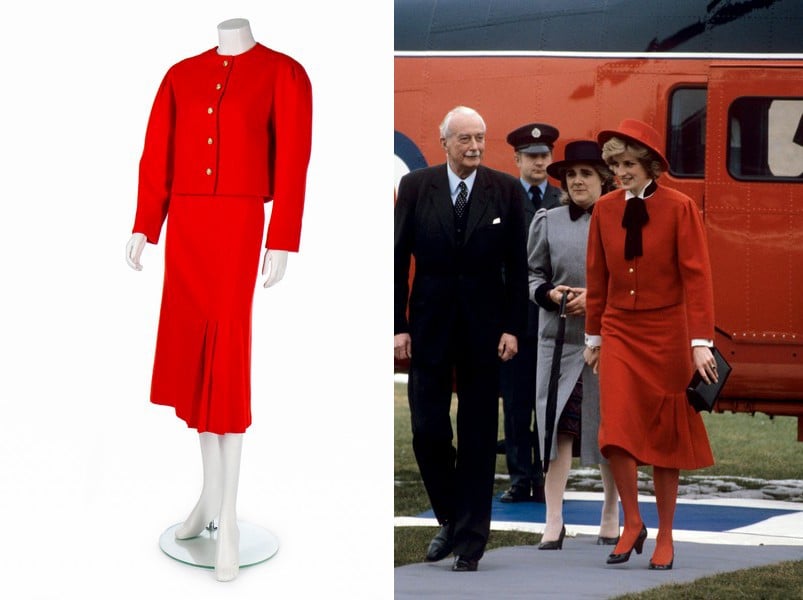 Lot 21 is a blue and white damask silk ensemble, specially commissioned from the Emanuels (who shot to fame after making her wedding dress in 1981), for the Royal Tour of the Gulf States, where she accompanied Prince Charles, in November 1986.

Lot 22, a Catherine Walker printed peach silk polka dot coat dress, 1988, was obviously a favourite piece – easy to wear, being both comfortable and smart. Again, by changing jewellery, or adding a hat, this versatile dress could be worn for both formal or semi-formal occasions. The Princess was photographed wearing it on four public occasions:

– 13th June 1988, to attend the Order of the Garter ceremony with Prince Charles, accessorised with a peach sailor bonnet with rear bow and upturned brim and single strand pearl choker

– 12th July 1988, to welcome President Evren of Turkey on a State Visit, with Prince Charles, accessorised with a peach sailor bonnet and double strand pearl choker

– 12th July 1989, on a visit to The Freeman Hospital, and Percy Hedley School in Newcastle Upon Tyne, accessorised with a simple white clutch bag and court shoes

– 15th May 1991, for an International Spinal Research Charity event at the Langham Hilton Hotel, London, with peach leather shoes. 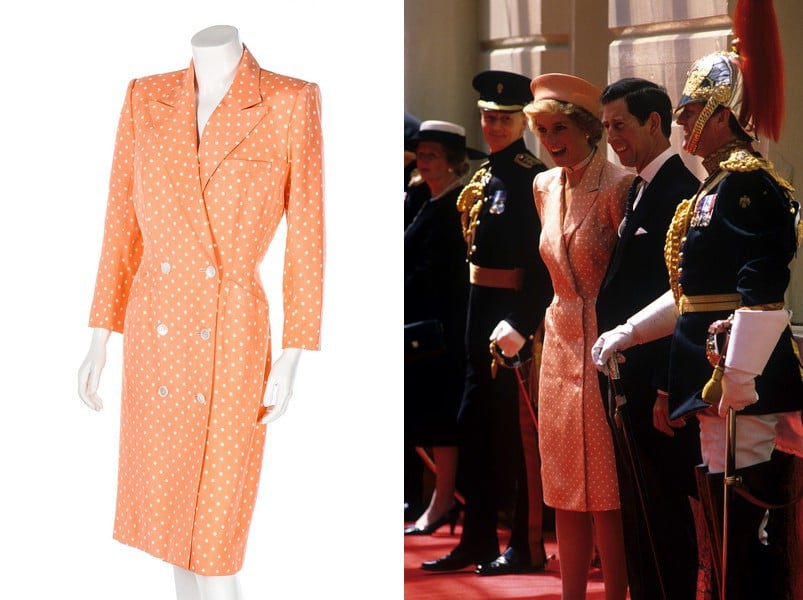 The late Karl Lagerfeld admitted to a reporter in 1984 that it was his dream to dress Princess Diana. He drew two sketches of his ideas, showing more clinging, figure-revealing clothes (lots 18 and 19). He lamented in his inimitable way the fact he could not make her clothes…

‘The Princess is so chic, and she has such beautiful bones. I would like to see her dress less romantically, in tighter clothes, to look more aggressive. But, sadly, she must wear British clothes’. 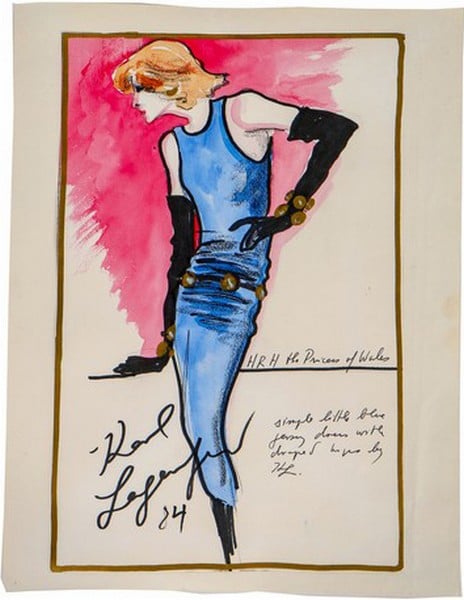 Finally in our Royalty section are some outfits worn by the Duchess of York (affectionately known as ‘Fergie’) for ‘It’s a Royal Knockout’ in 1987. The teams were led by an enthusiastic and gung-ho Fergie (blue), her husband Prince Andrew (green), Prince Edward (yellow), and a highly reluctant and stoic Princess Anne (red). The teammates were an impressive who’s who of celebrities of the day, including: John Travolta, Meatloaf, Tom Jones, Cliff Richard, Christopher Reeve, Gary Lineker, Toyah Willcox and Jenny Agutter. The event raised over £1 million for charity, with Princess Anne’s team winning in aid of Save the Children. Fergie’s team, representing International Year of Shelter for the Homeless, came last.