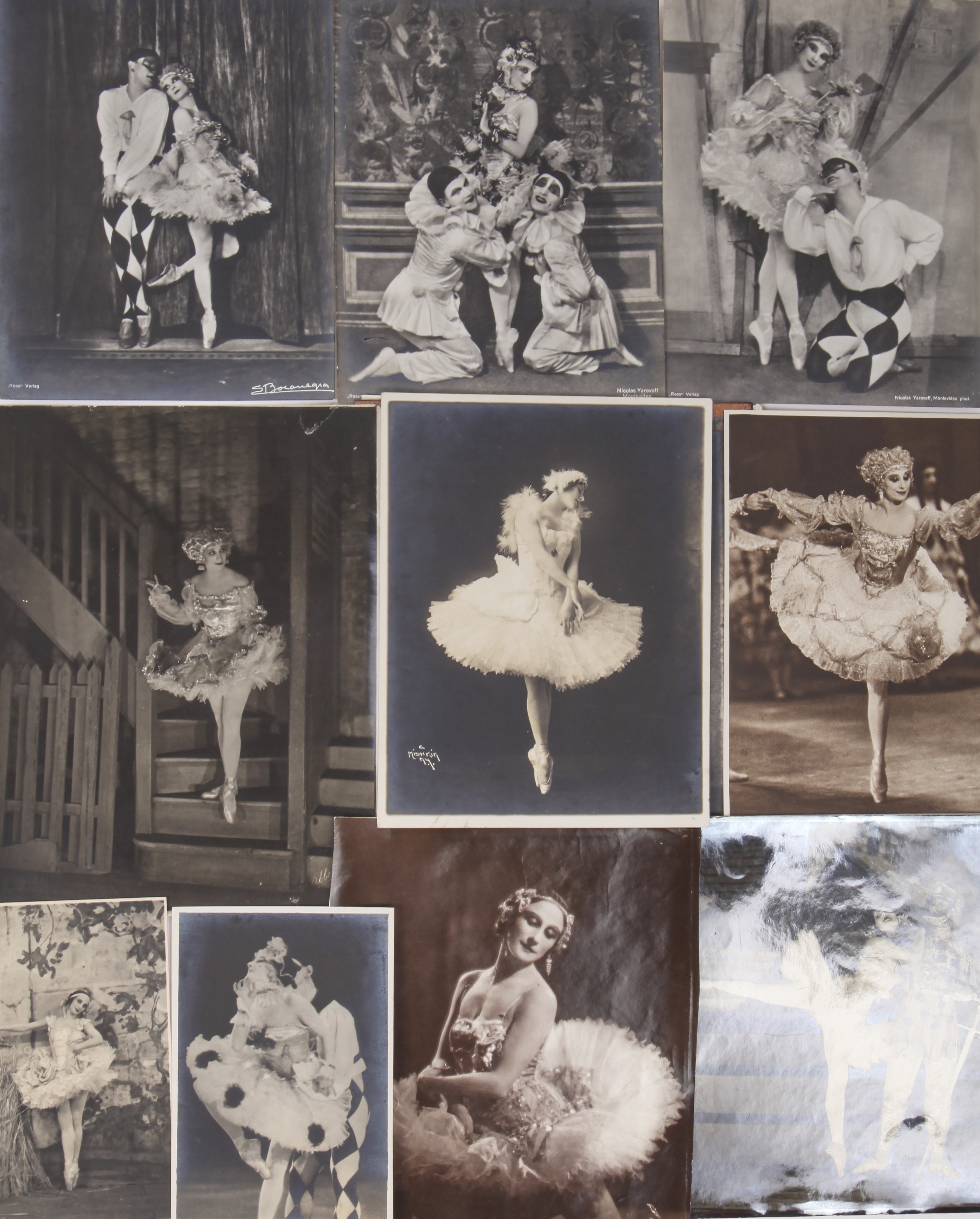 THE ROBERTA LAZZARINI COLLECTION OF PAVLOVA AND OTHER BALLET MATERIAL

Roberta Lazzarini is internationally regarded as a major authority on the history of British and Russian ballet and particularly on the life and art of Anna Pavlova. She and her deceased husband John founded the Pavlova Archive and Museum at Ivy House, Pavlova's London home, in 1974 where they built up an extensive collection of rare memorabilia connected with this prima ballerina assoluta.

This is a once-in-a-lifetime opportunity to acquire Pavlova-owned dresses, pointe shoes, autographs, photographs and ephemera. Other important dancers of the 20th century are also represented - Tamara Karsavina, Rudolf Nureyev, Margot Fonteyn and many others.

Part lot 298, Pavlova's earliest known autograph, 1901, showing her performing in 'La Vivandiere' at the Mariinsky Theatre. Her signature as a young woman is not as flowing and accomplished as those seen in later years. Estimate £300-400

Anna Pavlova (born St Petersburg 1881 – died The Hague 1931) was one of the most famous ballerinas of all time, indeed so celebrated that a dessert was named in her honour. Pavlova believed it was her mission to take ballet to the world. Graduating from the Imperial Russian Ballet school in 1899, she danced at the Mariinsky and Hermitage theatres in St Petersburg, the Bolshoi in Moscow and Wielki in Warsaw. She was renowned not only for her vivacity and skill but also for her personality, expressive, innovative style and ability to hold the most perfect silhouette or ‘line’.  Russia was in a state of flux and she left for Europe in 1908, performing with Diaghilev’s Ballets Russes in Paris in 1909, before establishing her own ballet company in London in 1913. Although from 1910 she danced primarily outside Russia, a country left in turmoil after the Revolution, her collaboration continued with the Imperial Ballet in Russia until the outbreak of war in 1914. She remained proud of her Russian heritage but in 1912 ‘home’ became a large, rambling Edwardian mansion in Golders Green London called Ivy House (where the Lazzarinis eventually created their museum) with extensive gardens and a large pond filled with swans which Pavlova studied to bring realism to one of her most famous roles - ‘the Dying Swan’. She was often photographed entwined with her favourite cob named ‘Jack’.

She shared Ivy House with her partner and manager, the impresario Victor Dandré, but her private life always remained something of a mystery. There are numerous photographs of her with Dandré at Ivy House, see lot 329.Ivy House also became a dance school and her students presented her with a trinket box in memory of performing with her in London in 1913 (lot 307).

At a time, pre-air travel, Pavlova and her company traversed the globe by ocean liner and criss-crossed vast countries via steam train. She toured not only the main cities but also small towns, spending sometimes just a day or two in one place, where very often she was the first ballerina people had ever set eyes upon. With her dark good looks and slender figure, she personified the modern ideal of a prima ballerina. Huge crowds greeted her wherever she went and Pavlova always took time to engage with her fans – becoming one of the first truly global superstars.

Pavlova captivated her audiences – inspiring a generation of children to take up dancing including Frederick Ashton who first saw her in Peru! The collection comprises hundreds of vintage photographs – featuring images of Pavlova’s travels including previously unpublished snapshots on board ocean liners, images of her looking stylish riding camels in Egypt, wearing kimonos in Japan, embroidered shawls in Mexico, etc., as well as records of her forays into South America, Australia, the United States and India. Astonishingly she performed over four thousand ballet performances between 1913 and 1930. Little wonder that a century later her name still resonates.

Another exquisite souvenir of her global travels is the collection of bouquet ribbons printed in gold with dedications and adulatory messages including ‘For the irreplaceable Anna Pavlova, from her admirers in the gallery, 1899-1909, from the regulars in the Mariinsky Theatre'.

Pavlova was photographed wearing this sari in Bombay posing with a parrot, on her first visit to India in 1922. Pavlova was fascinated by Indian dance and culture but was dismayed by the lack of interest in Indian dance within the country at the time, which provoked her partner and manager, Victor Dandré, to lament, 'There are no schools of dancing in India and it is an art in which nobody is interested.' Upon her return to London, she created a new Indian-themed ballet 'Ajanta Frescoes' followed by 'A Hindu Wedding'.  The latter she performed with the celebrated Indian dance genius Uday Shankar. Not only did he perform in this ballet, but also designed and choreographed it.

Lot 316, a Volkstedt porcelain self-portrait by Pavlova, circa 1927, along with a press image and magazine clipping of her with the maquettes. Estimate £150-250

Pavlova was also an accomplished artist and the sale includes crayon sketches done by her and also a self-portrait fired in porcelain by the Volkstedt porcelain factory, c.1927, taken from a clay maquette that she herself had made, as well as a pencil sketch of the dancer by Dame Laura Knight.Pavlova was renowned for her personal style. An elegant woman, her attention to detail and desire for perfection extended into her personal wardrobe and she was regularly photographed for Harper’s Bazaar, Vogue and other leading periodicals of the day.

Perhaps the two most poignant lots in the Pavlova collection are her satin pointe shoes worn near the beginning and the very end of her career, which show the ravages, scars and repairs of constant performance. Stylistically quite different in shape, lot 339 was worn in 1916 when Pavlova toured America and are typical of early Romeo & Nicolini  (her preferred shoe maker) examples. Romeo & Nicolini made shoes for many prima ballerinas including Tamara Karsavina and Lydia Lopokova, but their most famous client was Anna Pavlova. Nicolini made the shoes by hand to her specifications and always tried his best to please her. Pavlova often sent him drawings and measurements, and at times, she even visited him to show how some steps had to be performed so that he could create perfectly-fitting shoes in satin (for the exterior) and soft leather (for the inside). Nicolini was honoured that Pavlova wore his shoes, but he once confided to her teacher Enrico Cecchetti that he was glad he only had one Pavlova to please, as she was extremely demanding when it came to quality and design.

In a press interview where she was photographed surrounded by ballet slippers it notes 'it may be of interest to the general public to learn that Pavlova has rarely less than one hundred pairs of ballet shoes in work, and that some of her most favourite ones are at least ten years old. A ballet shoe apparently takes as much breaking in as a new pipe!'

The second shoe of 1930 has a much larger ‘box’ on which the dancer would balance. In these later years she requested photographers touch out the chunkier toe sections. The pointe has been darned to protect the satin tip for as long as possible. This shoe was worn for her last performance in London at the Hippodrome in Golders Green (near her beloved home) on December 13 1930.

By 1930, she was overworked and exhausted, yet the punishing touring programme continued. She was taken ill in Paris after a Christmas holiday in Monte Carlo, but typically decided to carry on with the European tour. She died of pleurisy in the Hotel des Indes, The Hague, twenty days short of her 50th birthday, on January 23rd 1931, with Victor Dandré by her bedside.  Her coffin was transported to London to 'lie in state' at the Russian Orthodox church, Buckingham Palace Road, where memorial services were held annually on the anniversary of her death until quite recently.

Another great Russian dancer to take the world by storm was Rudolf Nureyev.

The signed kid leather shoe in lot 351 was worn in 'Marguerite & Armand' at La Scala Milan, 19 September 1966, for a performance with Margot Fonteyn. The inner soles were removed by Nureyev himself and replaced with patches of felt for better grip. Nureyev explained that the elastics pulled the shoe up onto the under-part of the arch, thus emphasising it and making the instep appear higher, a custom first adopted by Nureyev and later by many other male dancers. His most celebrated on-stage partnership was with Margot Fonteyn.

This exquisite pink lamé tutu, designed by Oliver Messel, was acquired in 2003 by Roberta Lazzarini from the wife of the Front of House Manager at the Royal Opera House, to whom Fonteyn had gifted it in the early 1960s.'The Sleeping Beauty' production designed by Oliver Messel reopened the Royal Opera House after the war - February 20, 1946.  Although Fonteyn had danced in this role since 1938, she approached the eagerly-anticipated 1946 performance with great trepidation. It was this production of the Sleeping Beauty which transported the fledgling Sadler's Wells company (now the Royal Ballet) and Fonteyn, their prima ballerina, to international fame following the first performance at New York's Metropolitan Opera in 1949. In her autobiography Fonteyn recalls:"It was a sweltering hot October night. The atmosphere inside the Opera House was like a jungle before a tropical storm. As the curtain rose, applause greeted the Oliver Messel decor... When I ran out onto the stage there was a burst of sound. In retrospect, I think I won New York by smiling."