A doll fit for a Queen: Princess Elizabeth's favourite toy to be auctioned

Included in our 10th December ‘Passion for Fashion’ auction is a Royal treasure trove: a group of clothing and a rare, much loved doll were passed down through the family of Royal nanny Clara (Allah) Knight who worked for the Royal Family from Princess Elizabeth’s birth in 1926 until her coronation in 1953 (Lots 224 to 227). This rare doll and group of clothing was parcelled up and sent to her family each Christmas by ‘Auntie Allah’ for her nieces in Bexhill, presumably once the Princesses had outgrown them.

Lot 227, Princess Elizabeth’s Chad Valley doll, circa 1935, has a swivel head with pressed felt face inset with blue glass eyes, movable velvet limbs and ‘Hygenic’ toys label to one foot (estimate £800-1200). The doll’s wardrobe includes the original turquoise and white muslin dress, but also homemade silk nightdress and a very stylish turquoise tweed coat, possibly made by the Princess with the help of her nanny or governess.

The Chad Valley toys were sometimes dubbed ‘Toys for Toffs’ – well made and using high quality fabrics, consequently they were expensive. The Chad Valley company went on to make dolls in the likeness of Princesses Elizabeth and Margaret. Much to their surprise the Queen (mother) gave permission as her daughters already had their own much-loved Chad Valley dolls in their toy box. This doll pre-dates the Chad Valley Royal warrant which was awarded in 1938. 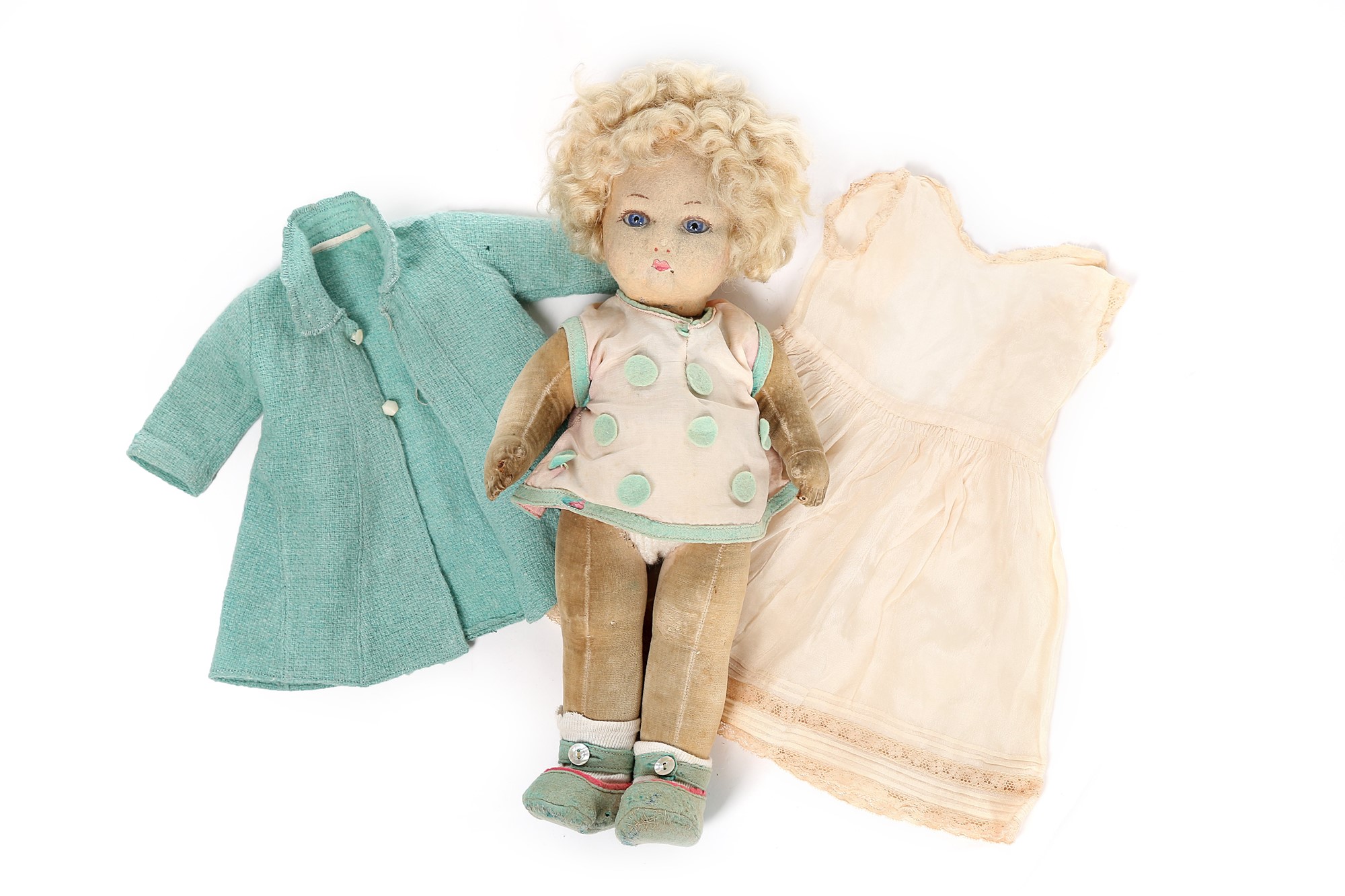 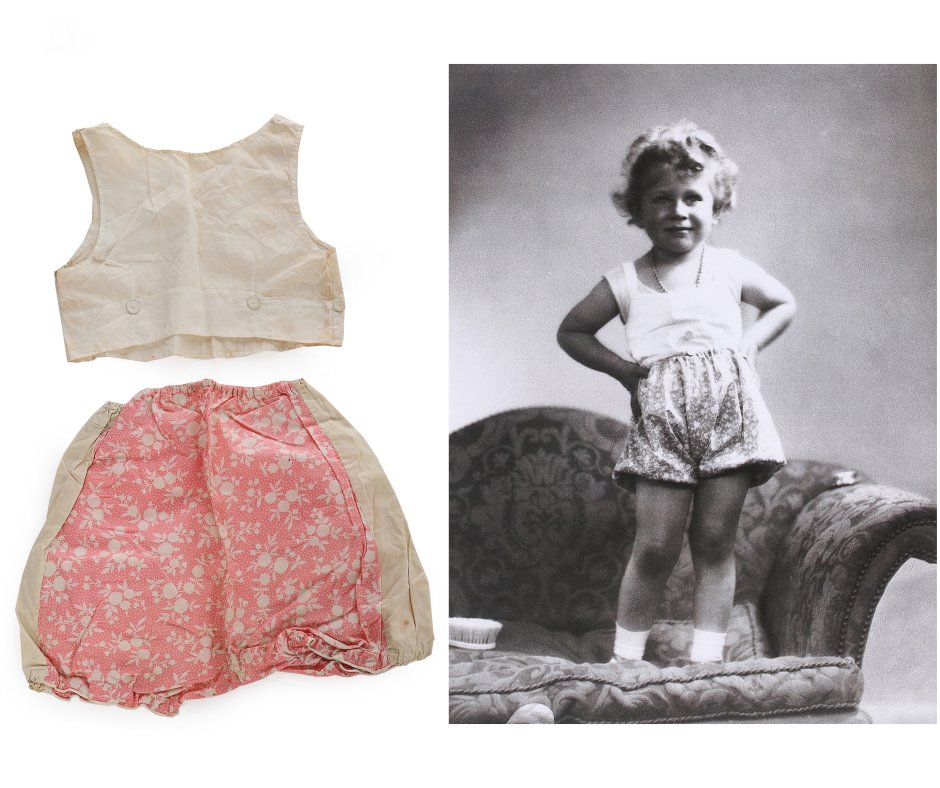 Lot 225 was worn by Princess Elizabeth as a toddler circa 1931, and she is photographed wearing it sitting atop a wind-up gramophone with her baby sister beside her (estimate £2000-3000). 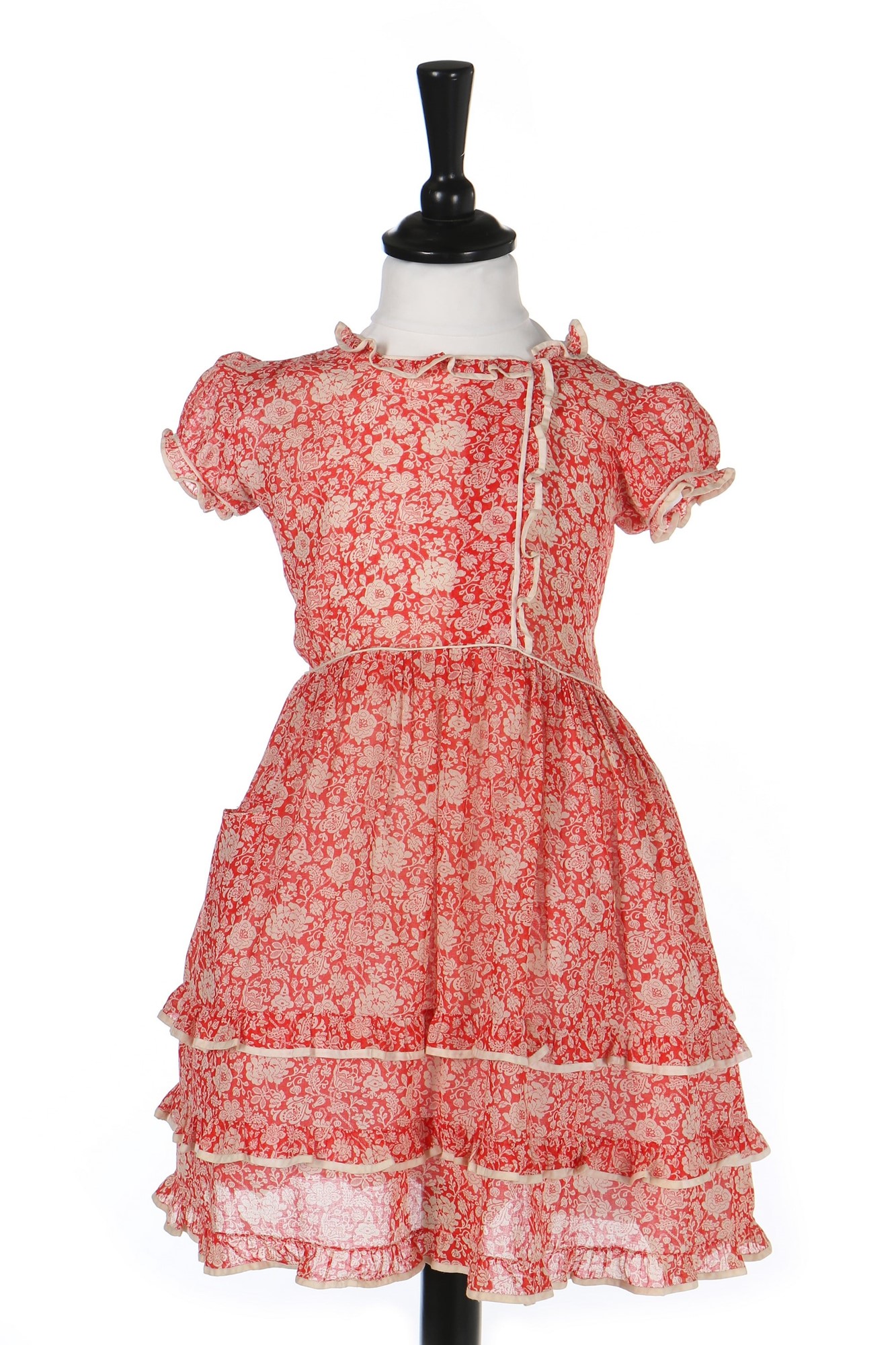 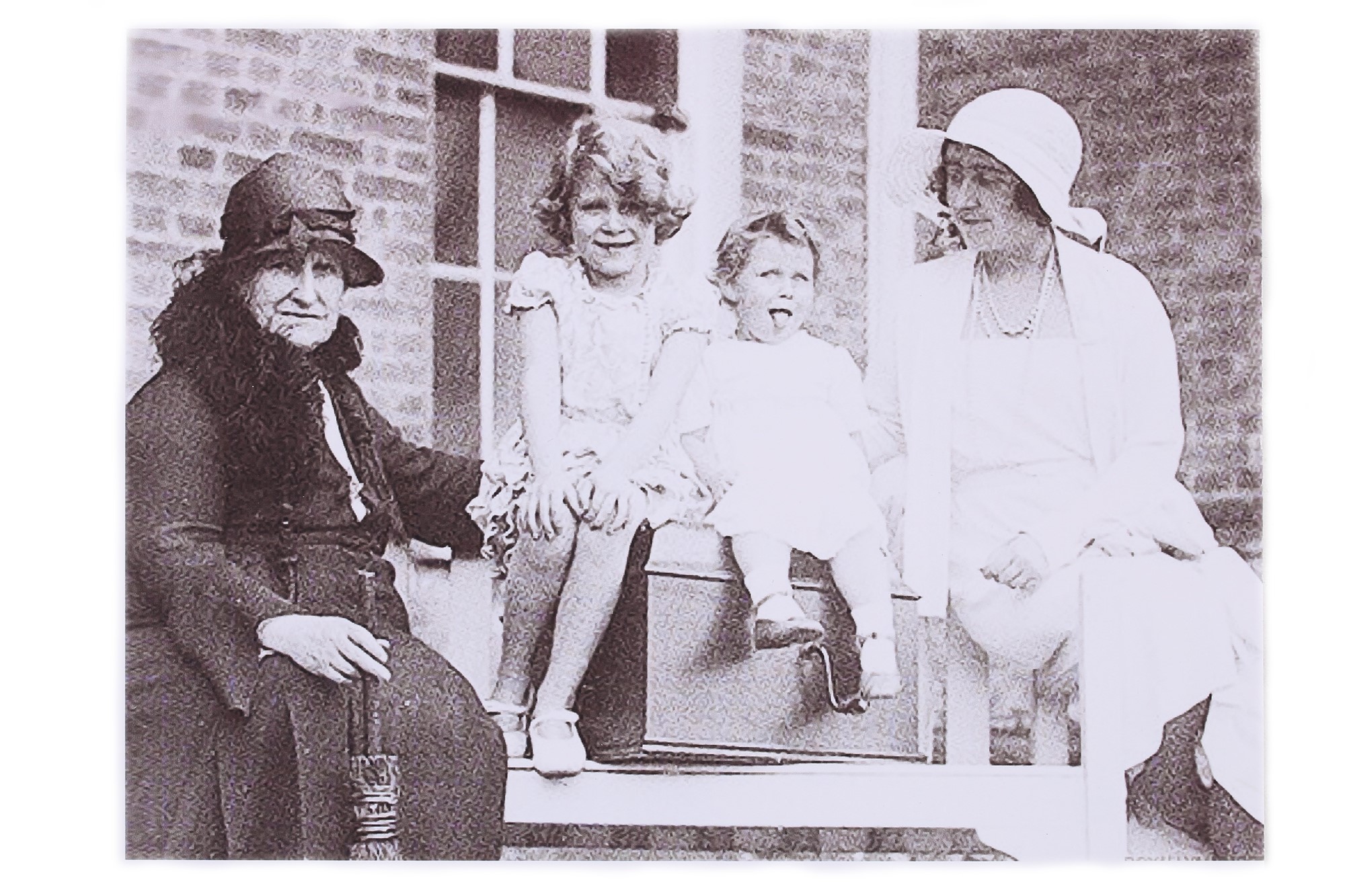 Lot 224 is a pair of Liberty style print floral dresses with matching knickers worn by Princesses Elizabeth and Margaret circa 1937, when the girls were around 11 and 7 years of age (estimate £6000-10,000). The little girls grew up behind the Palace walls, with no outside schooling and became each other’s best friend and playmate. These two charming little dresses illustrate the 4-year age difference. Elizabeth’s dress has had the bodice let out and altered to fit her as she grew and was an obvious favourite – Margaret’s less so as the print is bright and fresh and less laundered. 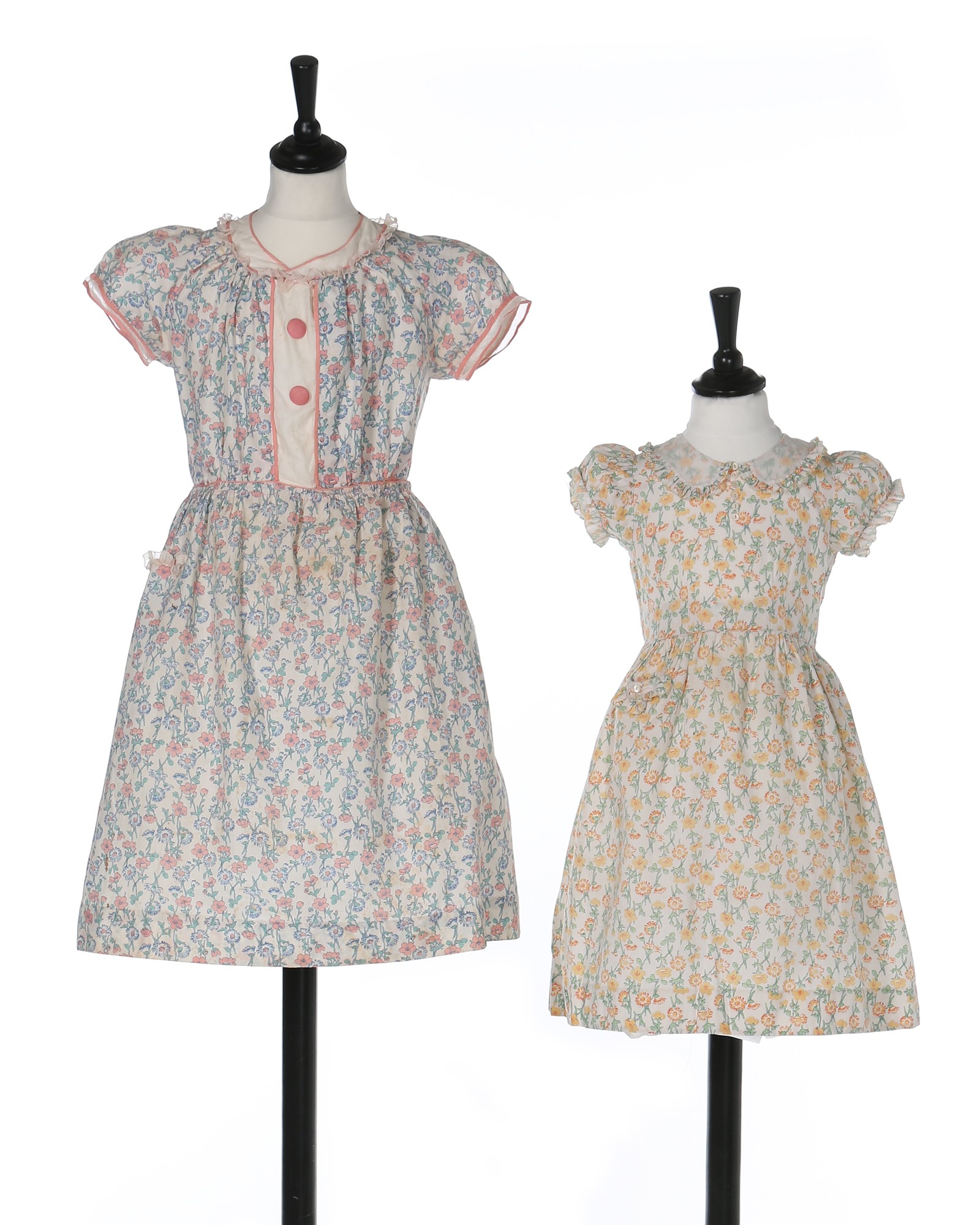 Their great, great grandmother, Queen Victoria (reigned 1837-1901) is also well represented. Most of the surviving garments tend to be from the latter decade of her life and so to find garments from the late 1860s-1870s is incredibly rare.

We have three black silk bodices (lots 221-223). After the death of Prince Albert in 1861, Queen Victoria wore full mourning dress to the end of her life. Essentially her dress style remained much the same from the 1860s to her death in 1901, with just subtle detail changes e.g. in the early 1860s, the sleeves were slightly fuller and from the 1870s-90s, they were often pagoda shaped, with open sides.

Size is also an indicator of date – by the end of her life her bust and waist measurements were much the same – a whopping 122cm, 48in. Our earlier bodice (lot 223) has a bust of 40in and waist of 36in, the other two 1870s bodices have busts of 44in and waist 38in. Severe, practical, there were only touches of white organdie at the neck or cuffs, edgings of jet beads and fringes to alleviate the blackness. One of the bodices (lot 221) has slashed pagoda sleeves and (for her) lots of embellishments in the form of trimmed with bands of shimmering black bugle beads, tousled silk ribbons, silk fringes and must have been worn for more important, formal occasions.

Inside the waist seams are inset pockets used to keep her gold fob watch, and on the plainer, day bodices there are also little pouches concealed behind the centre front button closure for which the purpose is unknown – possibly for a pill? Inside one sleeve is a loosely tacked patch of the softest silk. Perhaps Her Majesty had a skin complaint, and the patches were comfortable next to the skin and easy to remove for laundering? We will probably never know for sure. 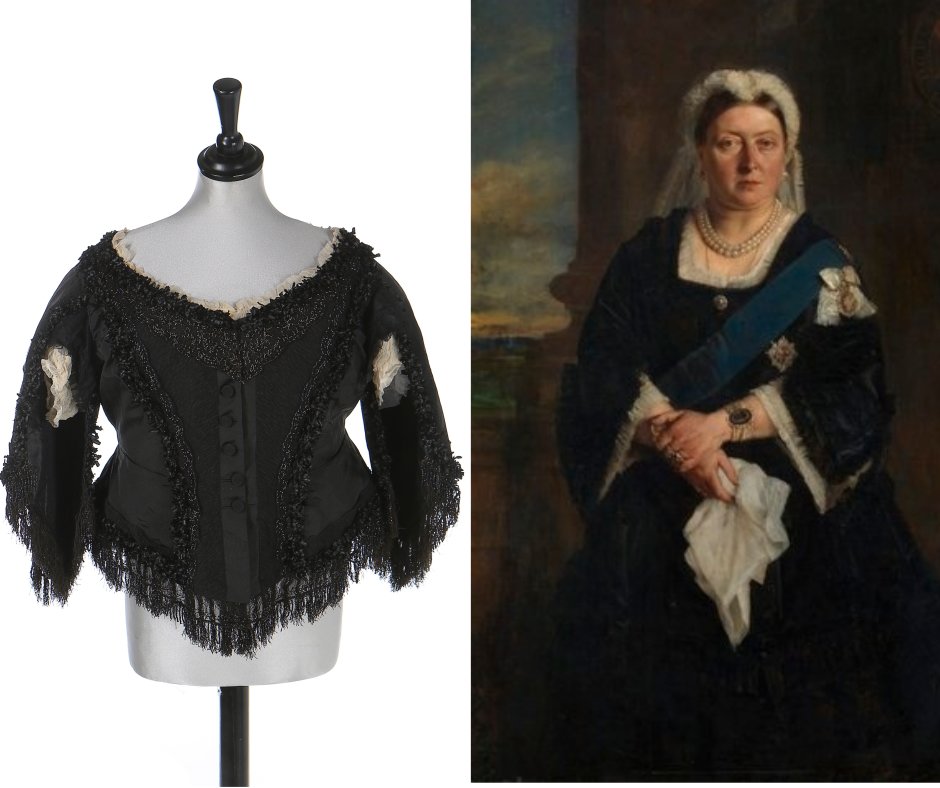 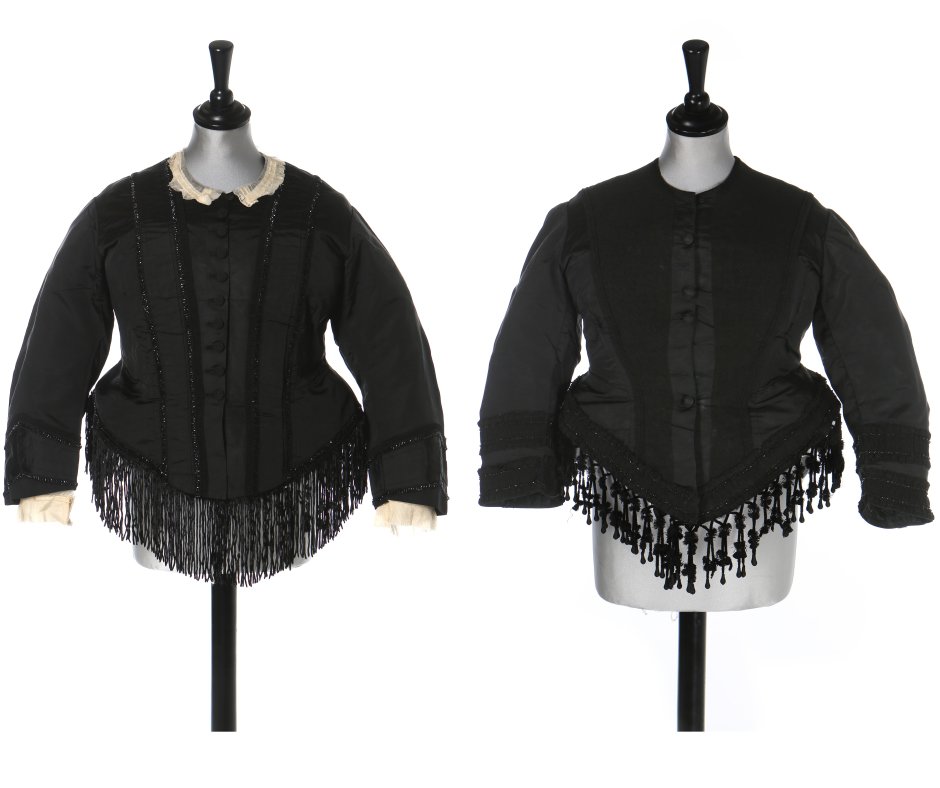 The provenance is equally fascinating. These bodices were the keepsakes of Mr George Searle (see portrait below), and letters to his son from Queen Victoria’s private secretary on Osborne House, The Royal Yacht and Windsor Castle stationary accompany the lots. George served the Royal Family all his life – as Footman to Princess Augusta from 1836, to Queen Victoria in 1842, as Page of the Presence in 1858, and finally Page of the Backstairs from 1859 until his retirement. His loyalty was further recognised when he was awarded the Victoria Faithful Service medal at Balmoral Castle, on Her Majesty’s birthday, Friday 24th May 1872, alongside the notorious Highland servant John Brown, who was also a recipient. A Page of the Backstairs works directly for the Sovereign and her Consort with duties including serving meals and tidying personal apartments. The Pages (there are currently four) also grant access to the personal apartments to other members of Household staff. The Page’s office is situated near the back stairs of the Buckingham Palace – hence the name. 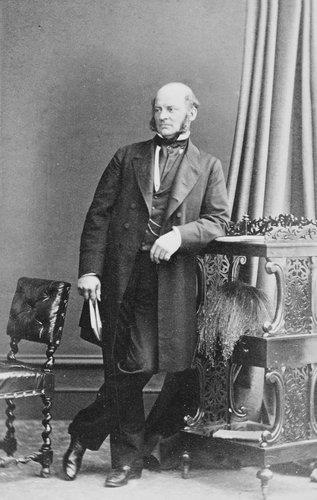 One of the most controversial figures of the 1930s was indubitably Wallis Simpson, later the Duchess of Windsor, who triggered the abdication crisis of 1936. Sitting perhaps a little uncomfortably therefore, alongside Royal garments in our sale, is lot 228, the Duchess’ Madame Grès beige jersey day dress of 1971 (estimate £400-600). With her perfect coiffure and willowy figure, she would have worn this dress at her Paris home or perhaps for a little light shopping at one of her favourite couture houses? Minimal and showing the influence of Cardin’s futurist lines, it would have been enlivened with a rather large, pricey jewel given to her by the Duke no doubt. 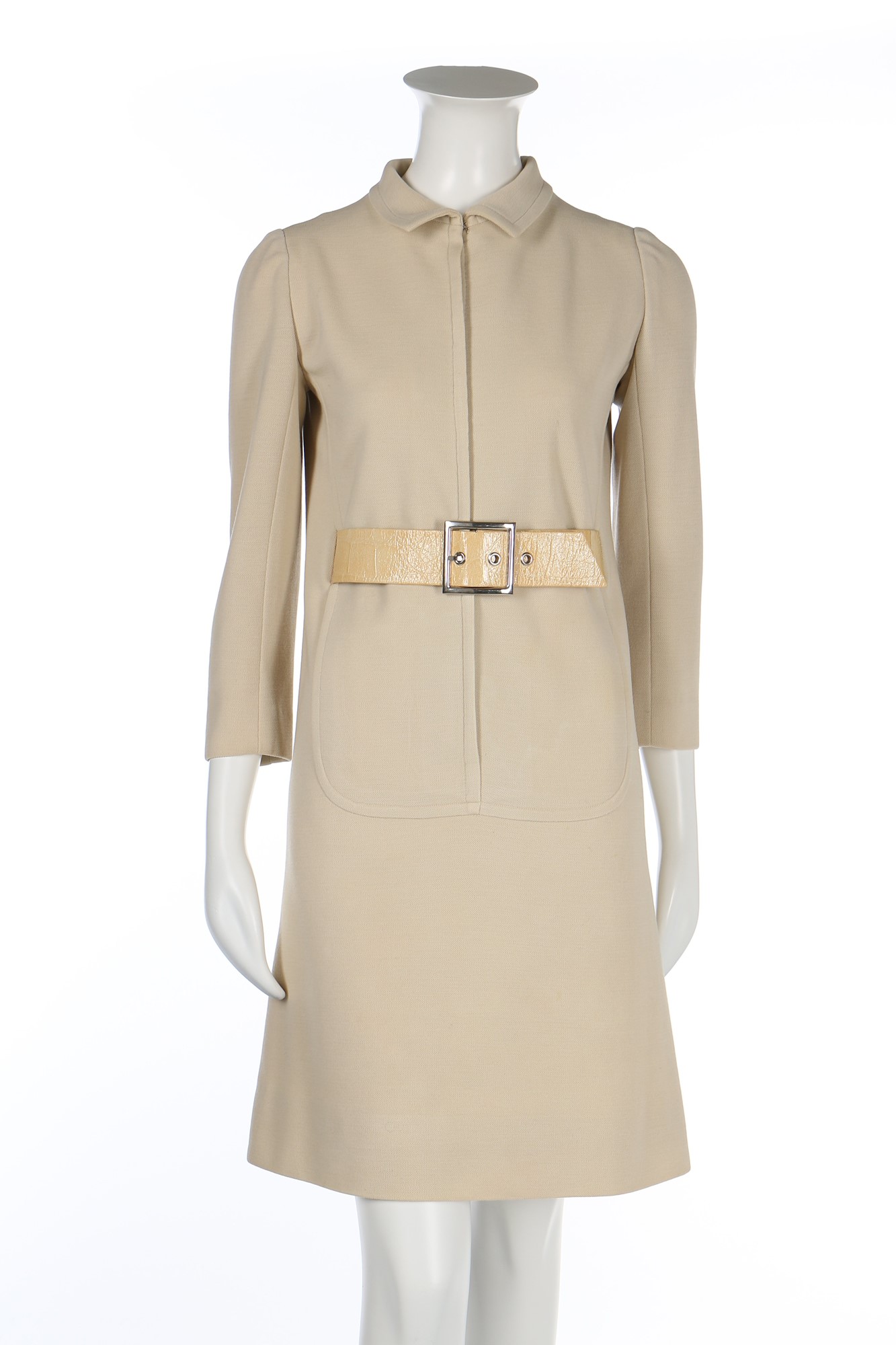 Royal Dressmaker Victor Edelstein opens his archive to us (lots 229-248) and it includes sketches of some of Princess Diana’s favourite ensembles, a rare signed photograph, as well as numerous Christmas cards, personal notes to the designer from Prince Charles and the Princess. One highlights Prince Charles’s dilemma of finding a Christmas present for the Princess in 1985 (lot 230, estimate £2000-3000). Acting on Anna Harvey of Vogue’s advice, he commissioned from the designer an ivory satin evening jacket. The fashion sketch for the jacket is sold together with a note from the Prince thanking the designer for:

‘getting the jacket ready in time for Xmas. My wife was thrilled with it much to my relief! I am not sure that husbands are all that good at choosing something for their wives to wear…Yours sincerely Charles’. 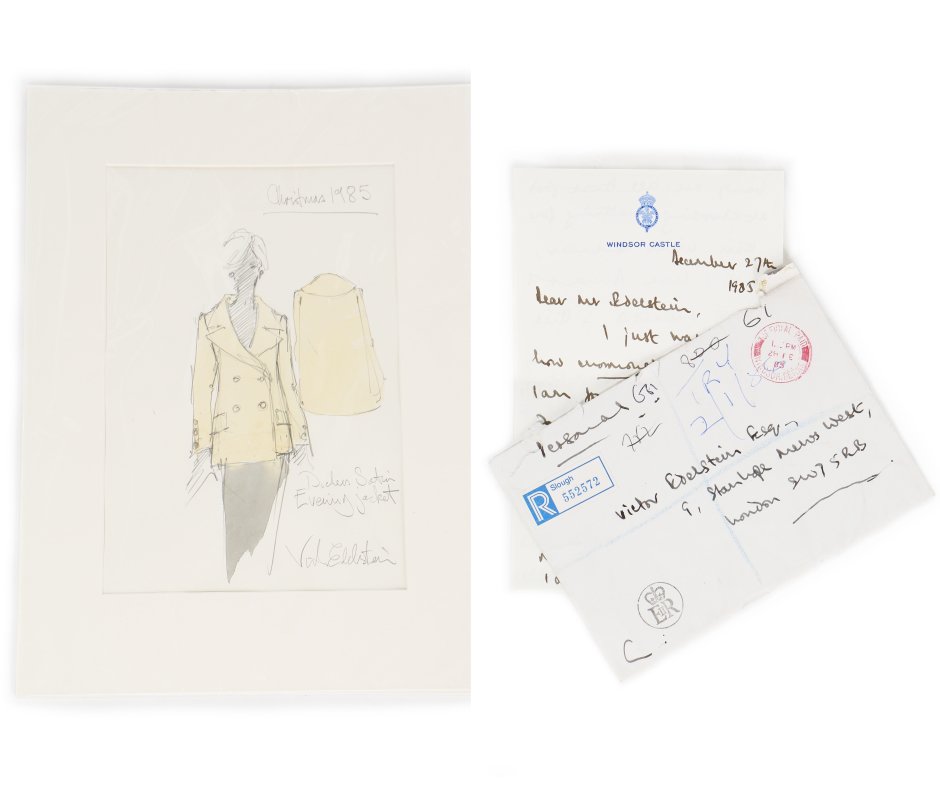 Perhaps the most poignant Christmas card in the collection is for 1992, the year of the couple’s separation. Instead of the usual family group there is a black and white photograph of just the two Princes staring glumly at the camera, signed just ‘Diana’ (Lot 240, estimate £400-600). 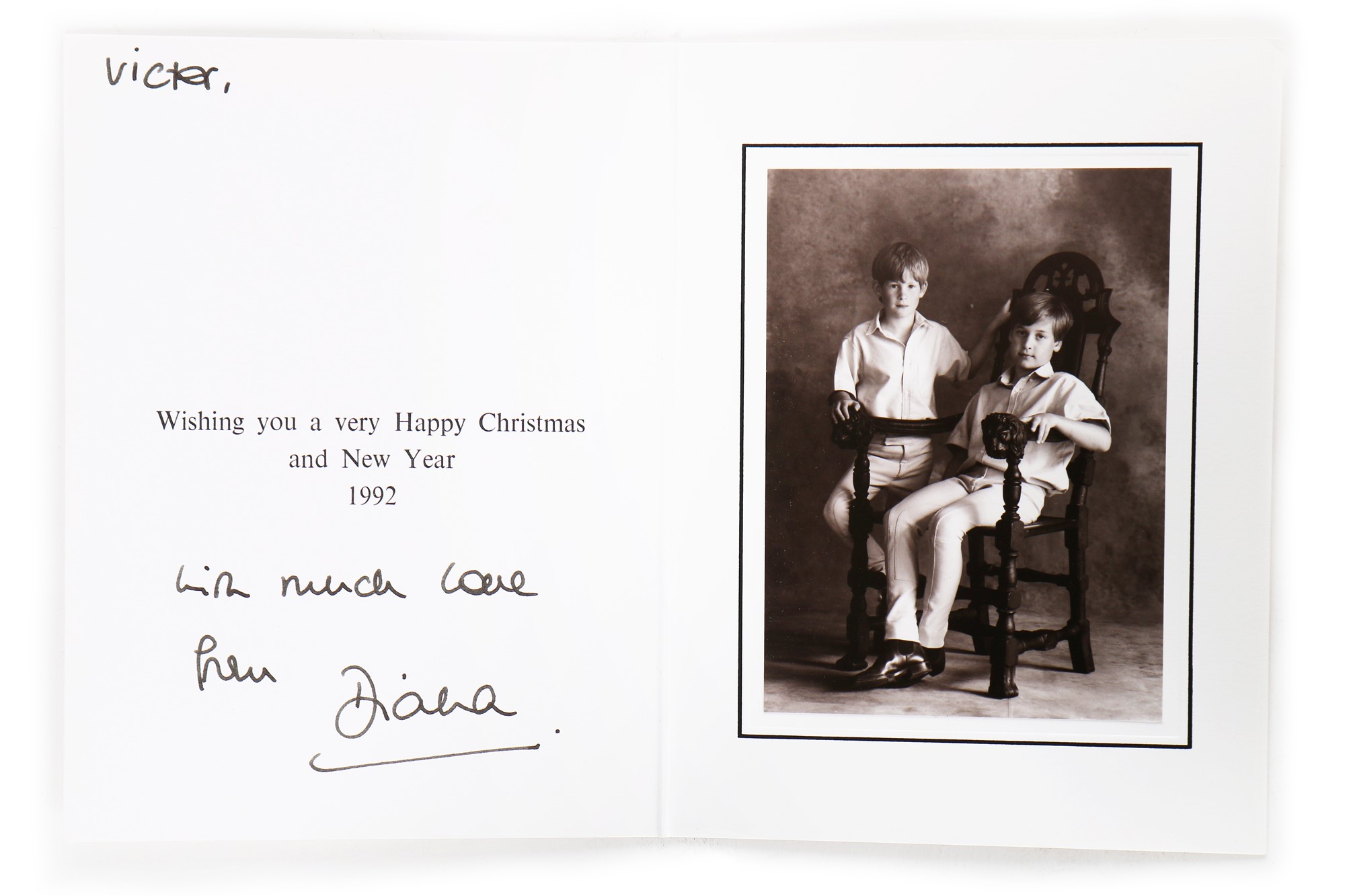 There are two very rare Princess Diana garments both purchased from the Chameleon second-hand dress shop, Hereford in 1994. They had been taken in for sale there by the housekeeper of Mynde Park estate, where the Princess was a frequent guest.

The first is a Chelsea Design Company blazer, from the late 1980s-early 1990s, with lightly padded shoulders, double-breasted, with low-set gilt buttons bearing three lions passant – the symbol of England (Lot 249, estimate £2500-3500). This had been stored in a stable loft, and only recently re-discovered. Unfortunately it had been attacked by moths and possibly a mouse (there are teeth marks to the lining)! Blazers were a staple of Princess Diana’s off-duty wardrobe and she was frequently snapped by the paparazzi wearing one. 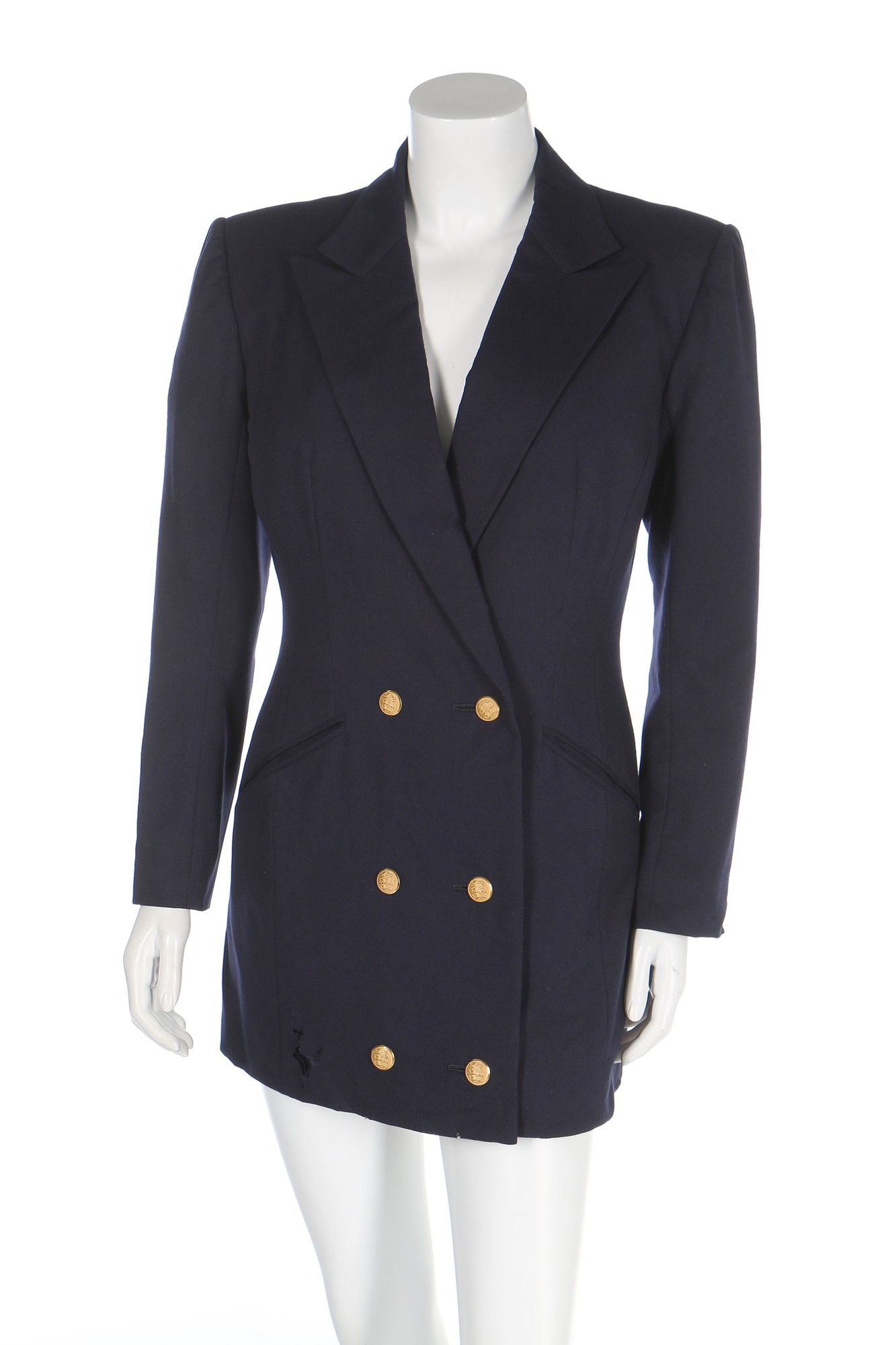 The spectacular Emanuel one-off ivory silk jersey gown was purchased with the intention of wearing it to a local hunt ball. Thankfully the vendor decided not to, but instead kept it stored in a box in the bottom of her wardrobe. Princess Diana wore this gown for  a visit to the Gulf States in 1986, so is well documented, appearing in photographs and newsreels at the time (Lot 252, estimate £60,000-100,000). Seated next to the Emir of Bahrain, she is reported to have whispered:

‘What would be your reaction if your son was to marry a tall, blonde English woman?

His reply, ‘I would be very jealous! 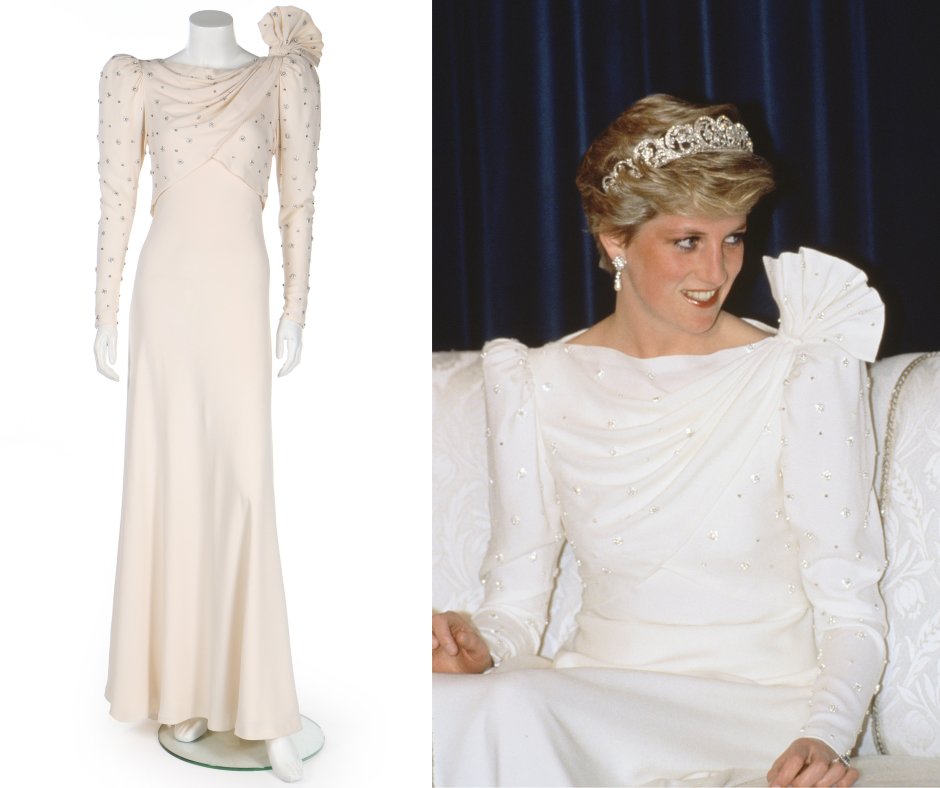