A Life Lived in Lanvin

It is very unusual to come across a relatively complete haute couture wardrobe from the 1930s and even more unusual to know the provenance. The beloved garments of Maryse Astraudo and her daughter Anne Marie were carefully folded and stored away, left forgotten for decades.

These clothes chart the lives of a stylish mother and her rather spoiled little girl. Two dresses belonging to Maryse (the mother) were made by the great couturier Jeanne Lanvin in 1913. They are great examples of Lanvin’s early work and have the slightly high-waisted line and columnar shape redolent of lines first popularised by the great Paul Poiret. The colours Maryse selected are muted and refined - the embroidery and beadwork is of superb quality but again understated and can only be fully appreciated upon close examination. The waistbands on both dresses have been let out, probably because she wore them during early pregnancy as her daughter Anne Marie was born the following year in 1914.

Jeanne Lanvin became famous for her adorable mother and daughter ensembles but the children's dresses are very rare, probably because they were played in and enjoyed to the full. As Maryse was an established client, it must have seemed natural to take her little girl to be dressed in haute couture there too. Anne Marie’s little pink taffeta dress, c.1922, with beaded roses to the front waist, shows signs of much use and pleasure, with tucks and alterations so that it could still be worn as the child grew.

Although other labels in the Astraudo wardrobe included Nicole Groult, Jenny, Maggy Rouff and Lenief, Madame Lanvin was obviously their favourite, as attested to by the number of garments made by her. It seems that both mother and daughter continued to patronise Jeanne Lanvin until the mid-1930s. There are natty little coats, some with matching hats, smart day dresses, floral and organza garden party gowns and sensible about-town suits. Anne Marie became engaged to Monsieur Christian Bricard, the director of the successful Parisian department store ‘La Belle Jardiniere’. During her courtship she wore a range of alluring pastel-coloured bias-cut dresses which showed off her slender figure to perfection. These included Lanvin’s ‘Pasiphae’, Winter 1934, of pale-green crepe with undulating basket-weave bolero-effect sleeves, complex criss-cross straps to the back (below right, lot 69) and ‘Bocage', Summer 1935, of pale-pink organza with elaborate latticed textured organza capelet sleeves (below left, lot 71). 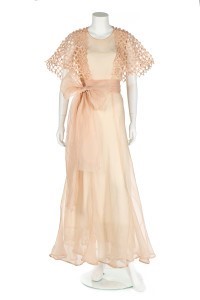 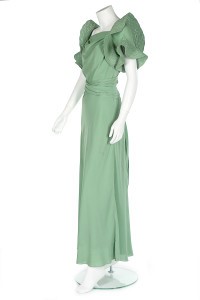 The wedding took place in June 1935 and of course, it was to Jeanne Lanvin that Anne Marie turned to make her bridal gown. Having known her since she was a little girl, Madame Lanvin knew which styles best suited her and was closely acquainted with the tastes of her client. The dress, of slippery bias-cut satin, has a 3.5m-long train formed from diamond-shaped bias panels, ending in a point. Anne Marie seemed to prefer clever construction with little adornment and so the dress is beautiful in its simplicity with curving deep sleeves, a pearlized floral corsage to the neck and matching headband of blossom. 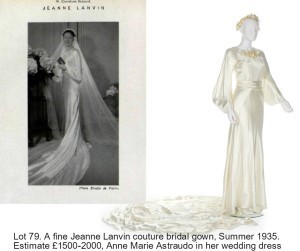 Monsieur Bricard’s store in Paris overlooking the Seine (now the headquarters of Louis Vuitton) was well-known for its large range of fashionable ready-to-wear garments which were aimed at Paris’ well-heeled middle class. As Anne Marie’s haute couture wardrobe seems to finish at the end of the first year of her marriage to Monsieur Bricard, it leads us to wonder if perhaps her new husband preferred her to dress more moderately and in clothes that would promote his store, rather than Madame Lanvin’s luxurious couture creations?

Of course, with the outbreak of the Second World War, life in Paris was to change radically. With German occupation and rationing, couture became a luxury fewer could afford, and even if they could afford it, preferred not to flaunt their wealth. Thankfully, Christian survived the war, dying in 2000, and his fashionable wife Anne Marie survived him by just a few more years, dying in 2004.