A lifelong passion: Lace from the collection of the late Enid Purvis

Above: Lot 397. Enid Purvis’ tamboured net bridal veil, lingerie and handkerchief made in a Lucknow convent for her wedding day to Captain Robert Graham Purvis, 11th March, 1931. Estimate £200-300. Also above: Enid Purvis (right) at her lace exhibition in 1969

In 1968, Mrs Enid Purvis stepped into the breach when a speaker hired by the Women’s Institute unexpectedly dropped out at the last moment. The only thing she could think to talk about was lace, which she had learned to make at school in Switzerland and which she had commissioned from a convent in Lucknow in India for her wedding in 1931 to Captain Robert Purvis.

The talk was a great success and resulted in gifts of lace from the various members. Between 1968 and 1981 Enid held regular exhibitions and talks which attracted even more gifts including some fine pieces from the 19th century collection of the Countess of Effingham.

The Enid Purvis collection dates from the late 16th century to modern times with a geographical range from Russia to the Azores. Lace collecting became her life’s passion and she became a respected expert in the field. Her collection includes highly desirable, collectors’ pieces of great antiquity as well as more useful turn of the century bobbin made edgings and machine lace.

To make the exhibitions more visually exciting and to put the lace into context, she often displayed the lace alongside reproductions of famous paintings showing lace being worn. She meticulously mounted lace for display onto colour-coded cloths for ease of identification and countries of origin – Irish on green, Honiton on Royal blue, 16th and 17th century pieces onto burgundy grounds etc. There are lappets, engageants, caps, veils (including her own made in the Lucknow convent), christening robes and myriad handkerchiefs. The collection also includes samplers and embroidery and her extensive library which will be sold in group lots.

Enid was also interested in lace making accessories such as antique lamps, bobbin pillows and superb turned bone and wood bobbins, many of them inscribed with names or romantic messages. Below are a few highlights selected from this large and comprehensive collection, which is being sold as part of our February 27th auction: 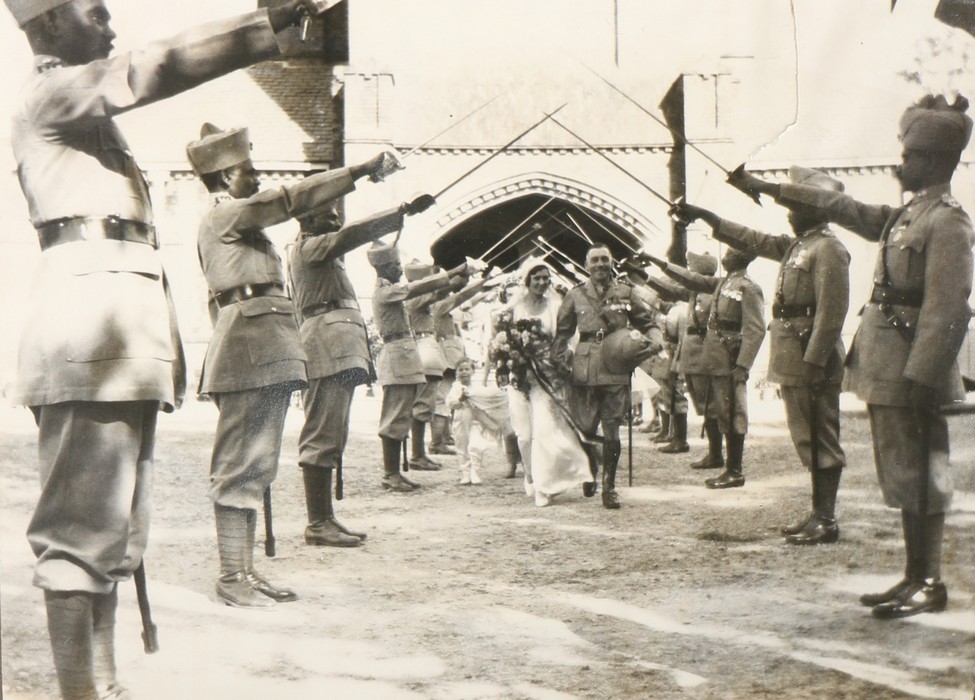 Above: The marriage of Enid (Symons) to Captain Robert Graham Purvis, 11th March, 1931.