Following in the Footsteps of Mary Radcliffe 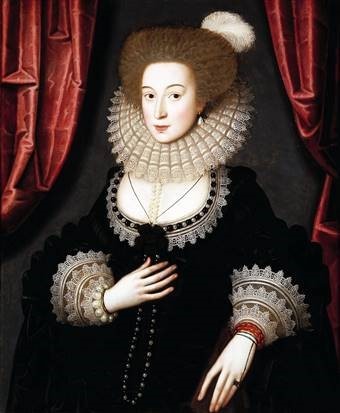 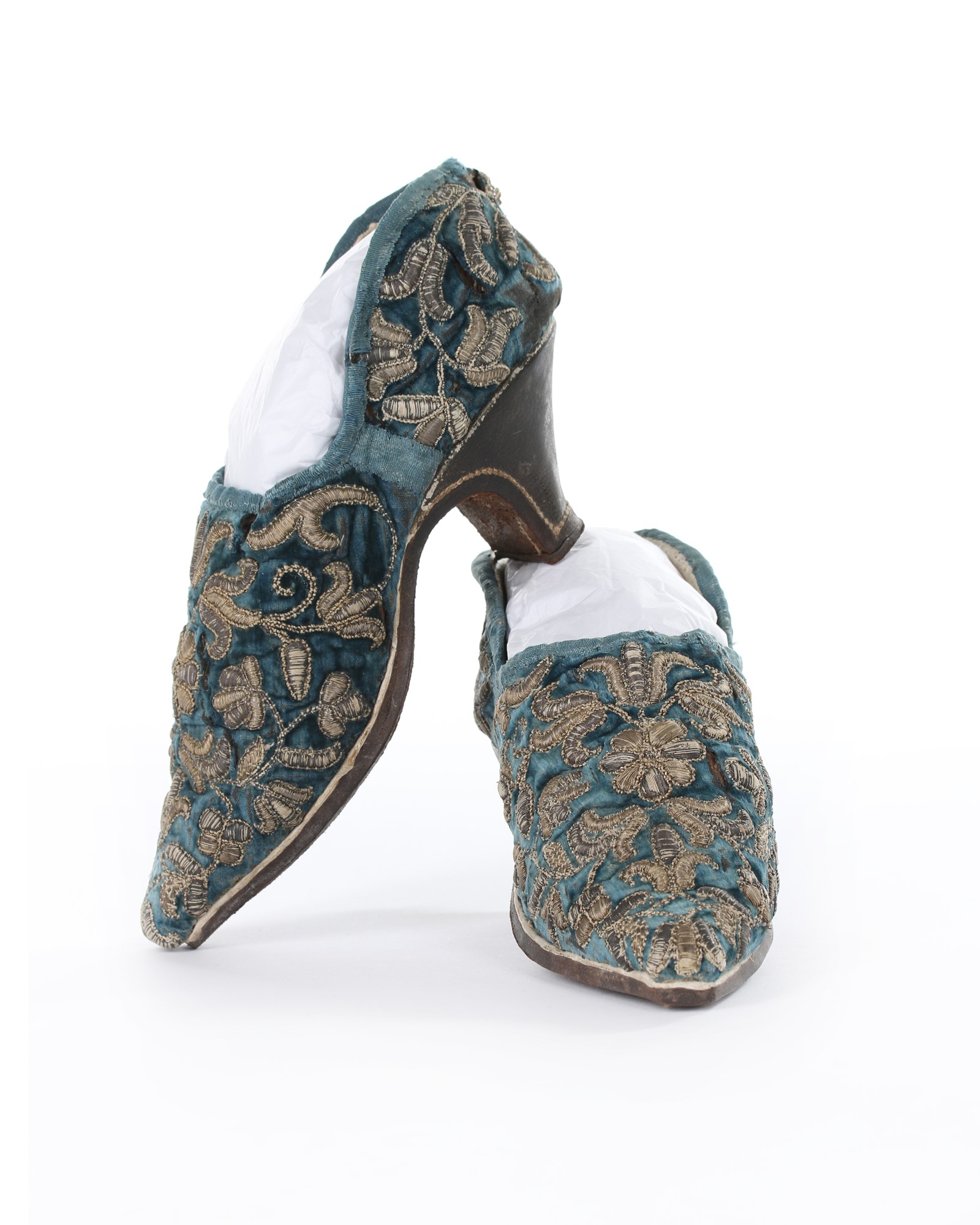 It is not every day that one comes across 17th century dress or accessories, especially those with interesting provenances. Our 8th of December auction contains some fascinating pieces relating to King Charles I and also a splendid pair of embroidered velvet shoes which are believed to have belonged to Mary Radcliffe. Stylistically, the shoes have been dated as 1660s, though we believe that Mary died in Covent Garden, London in 1653.

Mary was born c.1605 – the daughter of Sir John Radcliffe (1581-1627) of Ordsall Hall, who owned huge estates in Lancashire. She had two sisters and one brother.

Despite retaining their Catholic religion, the Radcliffes remained staunchly Royalist in support of the Protestant Queen Elizabeth I and King James I – which must have been something of a balancing act in the late 16th and 17th centuries.

Around 1619 she was painted by William Larkin, wearing a stark black velvet dress with white needlepoint ruff collar and cuffs, the plunging neckline exposing a lily-white bosom, outlined in black and white pearls with an aigrette in her elaborately frizzed hair. The portrait now forms part of the Berger Collection in the Denver Museum of Art.

As a young woman Mary was Lady in Waiting to Elizabeth Stanley, Countess of Huntingdon, who was the great, great grand-daughter of Mary Tudor, younger sister of Henry VIII. It is recorded that Mary helped Elizabeth evade the advances of an elderly suitor – Sir John Ferrer, instead marrying the 5th Earl of Huntingdon in 1601 at the age of 13 – the Earl being just 15! She was not so lucky herself.

Mary married twice – but twice she was the second wife – the previous brides having both died young. Both men were much older and were quite difficult characters. She married Sir John Stanhope (1591-1638) in 1622.

He was described as a ‘Choleric’ man, who had inherited the large Elvaston Estate in Derbyshire. He rose to prominence as a courtier under King James I, but suffered from gout and ill health. They had one son together, also named John. In 1638, aged just 47, he died, leaving Mary a rich widow at a time of great political and civil unrest. He requested that there should be no funeral ceremony and that £10 should be distributed between the poor of Elvaston. Mary was appointed sole executor and to her he left the bulk of his estate, including £3400 in money and bonds and at least £500 out on loan. His heir and namesake was just 9 years old. Mary erected a memorial to her husband in the local church at a cost of £600. During his lifetime Sir John had been involved in a long running feud with another rich Derbyshire estate owner – the Sheriff of the County – Sir John Gell (1593-1671). Stanhope had refused to pay a tax called ‘Ship Money’ on behalf of the Crown so Gell seized Stanhope’s cattle and he was summoned before the Privy Council. Eventually Stanhope paid his dues but they remained sworn enemies. 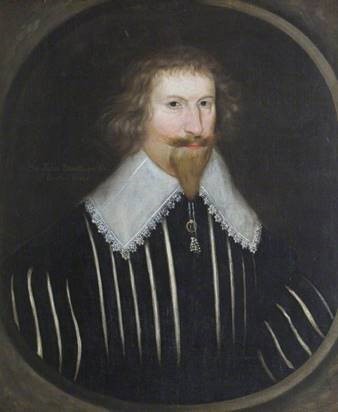 Just prior to the Civil War of 1642-1646, Sir John Gell was created Baronet by Charles I, partly for his zeal in collecting taxes in the county of Derbyshire on his behalf, but also as a means of persuading the Presbyterian Gell to take the Crown’s side against Parliament. Despite being granted the title, Gell chose the other side – that of Crowmwell and the Parliamentarians. He was appointed Governor of the county of Derbyshire in 1643 and Commander of Parliament’s forces in Derbyshire, Staffordshire and Warwickshire. He was a good soldier but was famed for his irascible nature and dictatorial attitude.

In 1643 he took a brigade of Roundheads to the widow Mary’s home, Elvaston Castle, on the prextext of searching for arms. They ransacked the manor, destroyed Mary’s beloved flower garden and then stormed the church, defacing statues and monuments, one of them the tomb of her deceased husband. Gell’s troops were notorious for plundering. And yet despite all of this, in December 1647, Mary became his wife (his previous one having died just three years earlier). We must ask ourselves how this unlikely alliance ever took place? It was said that he married her to destroy the glory of his late adversary – Mary’s first husband and the ‘glory’ his house. Not surprisingly, the marriage was dissolved in 1648 after less than a year. Sir John complained in Parliament that his Mary had moved her money and estate to male relations before the ceremony – thus depriving him of it! She was obviously a shrewd woman. It is nice to think of her surviving all these trials of life and perhaps dancing at the court of King Charles II wearing these beautiful shoes, paid for with the money she had managed to keep from the grasp of Sir John Gell. 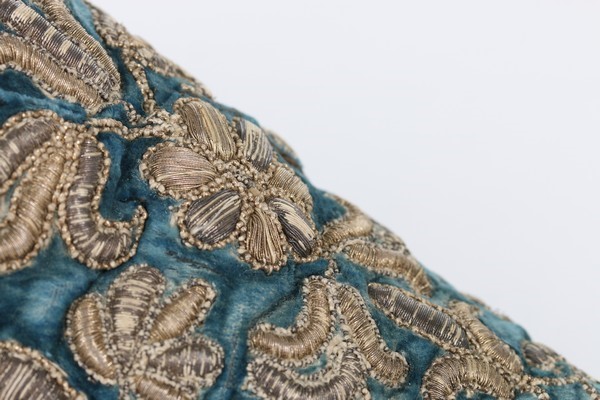 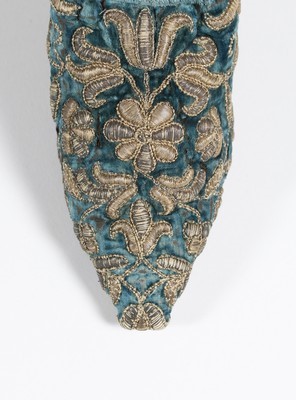