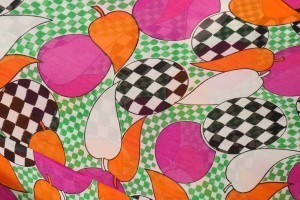 As always, it was hard for the KTA team to pick our favourite items from the upcoming sale of antique and vintage fashion and textiles. With rails of breathtaking 1930s chiffon dresses, glittering beaded jackets, sweeping Victorian gowns and funky 1970s glam-rock essentials, we were spoiled for choice! 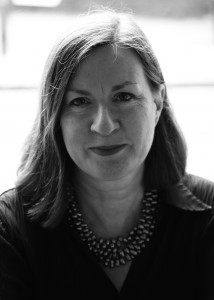 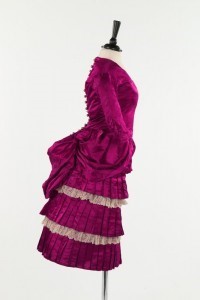 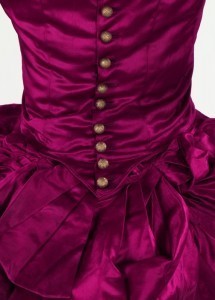 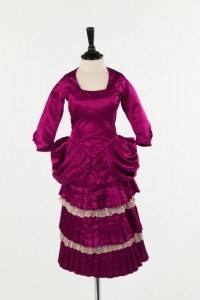 I love the little 1880s wine coloured satin girl’s dress. Both in terms of colour and style it is simply a miniature version of what an adult would have worn. Such a strong ‘adult’ colour would be deemed unusual in this modern age but in the 1880s these rich, jewel colours were very fashionable for adults and children alike as many of the surviving crazy design patchwork coverlets attest, formed from scraps of clothing of the period.
The little girl who wore this splendid silk satin frock c.1885 would probably have been around eight years old. Just like her mama, she would have worn stays, a chemise, long drawers and layers of petticoats. As she grew older the amount of boning in the corsets increased – poor little thing! Beneath the pronounced rear bustle she would have probably worn a little collapsible cage which was strapped round her waist, to make sitting down easier, but would spring back into shape when she stood up, thus maintaining the desired silhouette.
Children today who can freely run around, climb trees and actively play, wear clothes of breathable flexible fabrics which allow free movement. They have no conception of the strictures and constraints placed on their long-gone ancestors who suffered to look beautiful even at such a tender age! 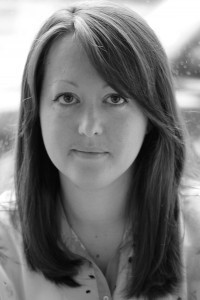 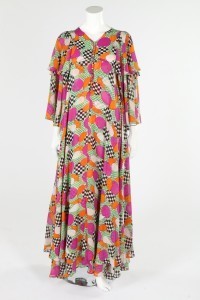 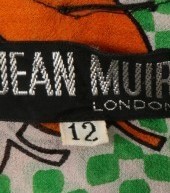 Jean Muir is perhaps better known for her jersey dresses and separates in more muted tones of blue and green, but I love this fun print by her! It is so colourful and unique, and is in classic 1970s style with the loose, kaftan-like shape and tiered sleeves. A great dress for summer! 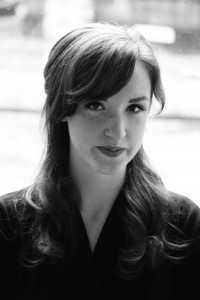 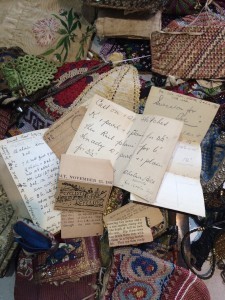 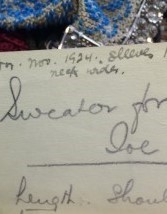 This group of tiny purses is such a delight to the eye: each one is unique and beautifully crafted. But the reason I picked this lot as my favourite is because of what is inside one tiny little notebook, dating circa 1885. Hidden inside is a clutch of tiny handwritten notes and newspaper cuttings, mostly relating to knitting, with dates ranging from the 1880s to 1914. The original owner must have had this her whole life. One note, dated September 1914, contains knitting instructions for a 'Cholera Belt for troops'. Cholera belts were long, flat, knitted strips of wool wrapped around the abdomen and believed to protect the wearer from illness. Another handwritten note, dated 1924, is entitled 'Jumper for Joe' and she states that the jumper 'must last him AGES'. I like to think that Joe had made it safely through the Great War, and subsequently many a cold winter, thanks to the lovingly knitted items from this woman.

Auction: Tuesday 28th April at 10am