Hidden below the flap of a flame stitch embroidered purse is the name ‘Rebecca Ann Colt’ worked in black wools. Tucked inside is a stiffly-folded piece of parchment which bears a wedding certificate from Sunbury, Georgia, dated 1767 and a carte de visite photograph of a 1770s portrait of Rebecca Ann. She peers out at us over the centuries, a pretty, sombre young woman with powdered towering wig - the height of fashion. Family diaries and research show that her life was to be one of adventure and great challenges in both America and Britain in the latter half of the 18th century. 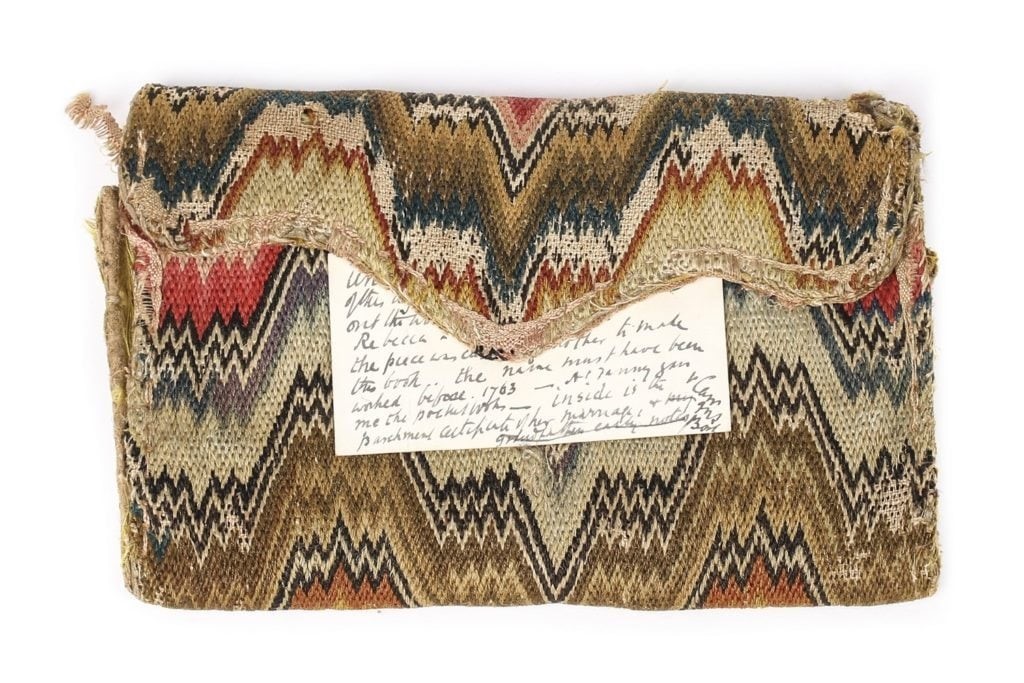 Little is known of Rebecca’s origins. She may have hailed from Ireland. A 19th-century account records that she was the niece of an Irish bishop. The embroidered purses are of a style normally found in New England – particularly Massachusetts and Connecticut, so she could have spent her childhood there. In a letter by J.W. Carr, Feb 27th, 1898, Barming Rectory, Maidstone:

'It was willed 1880 that receiving a screen said to be an Eshott screen I looked at two old pocketbooks of my great grandmother's given me by Aunt Fanny to see the stitches and compare it with the screen. Then my wife noticed some faint marking and at the top pretty hid was marked 'Rebecca Ann Colt'. Thus the pocketbook was maded (sic) in Georgia in South Carolina while quite a girl.'

She married young – to James Dixey of Georgia, from a big plantation-owning family. But aged just eighteen, she found herself widowed with an infant son, who had been named James after his father. The records show that she travelled to England to marry Thomas Carr of Northumberland on 22nd December 1765, after which the couple returned to America – their marriage being re-certified in Sunbury, America, 8th June, 1767 (see below). 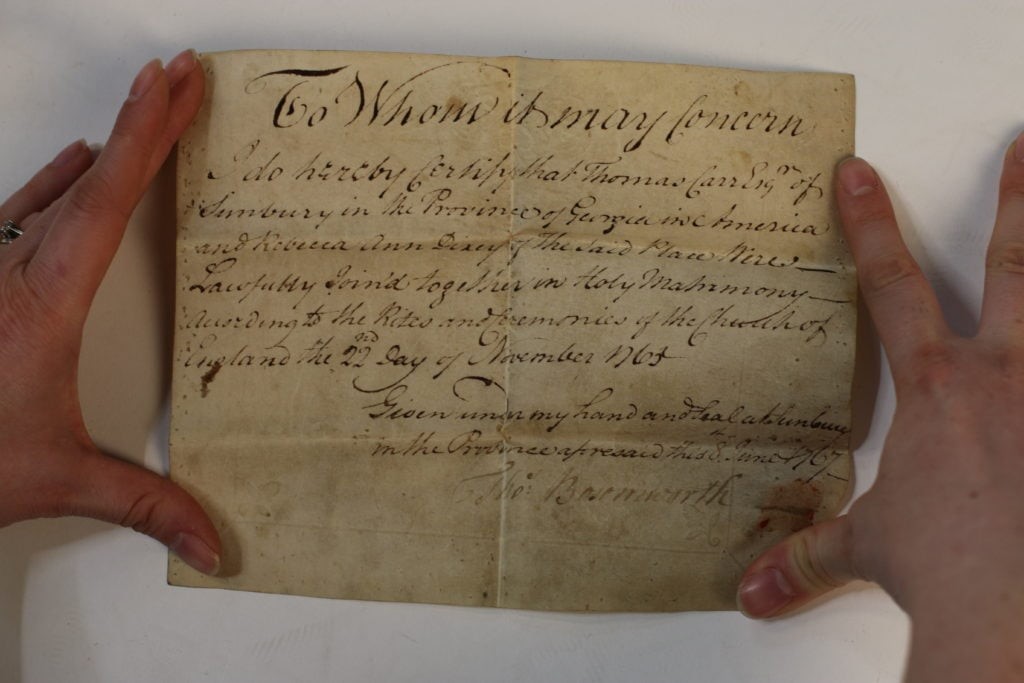 Her new husband Thomas was an interesting fellow. His family emigrated to America in the 1740s as the result of a scandal. Thomas’ mother had run away to Paris with her lover, abandoning her husband and children. His father Mark decided to create a new life for them all in America and became one of the earliest settlers of Sunbury, Georgia, acquiring vast tracts of land in the process, whilst still retaining the family estate – Eshott Hall, Morpeth, Northumberland.

Settlers in this part of America were subject to attacks from the Spanish, native American Indians and later on, the British, during the war of Independence and Thomas was involved in many skirmishes and battles. Thomas Carr is recorded as having been an officer in Savannah in 1762, returning to Sunbury in 1763. In 1767 he was appointed (as his father before him) as 'Collector of Customs for Sunbury Port'. On May 5, 1767 he signed the Georgia Roll of Allegiance.

Rebecca was Thomas Carr's third wife, his having previously married a Mrs Cunliffe in Barbados, with whom he had two children - Jane and Mark William. His second wife (unknown name) died in childbirth leaving him with a daughter - Ann Carr. Rebecca thus became a stepmother to three children, although the youngest girl Ann was returned to her maternal relations in England to be brought up. Rebecca gave birth to Rebecca Rose Carr, c.1766, and a son Thomas William, born in Savannah in 1770.

Thomas' elder brother (William) pre-deceased him and so on the death of his father Mark in 1770, he inherited the Eshott estate. He returned to England in 1772 with his wife and family, having sold off as much of his Georgia estates as possible. As a customs collector he had comfortably lived off an income of just £150 a year. The Eshott estate brought in £1500 a year, a fortune at the time. However, in his role as country squire, he felt that he should live up to his new position, well beyond his means, squandering his wealth in the process. In 1778, Thomas was honoured with the position of High Sheriff of the County, thus providing him the perfect opportunity for even more extravagance. For the inaugural procession he commissioned richly embroidered robes and saddle cloths and carried a pair of richly embroidered 17th-century gloves from Eshott Hall. 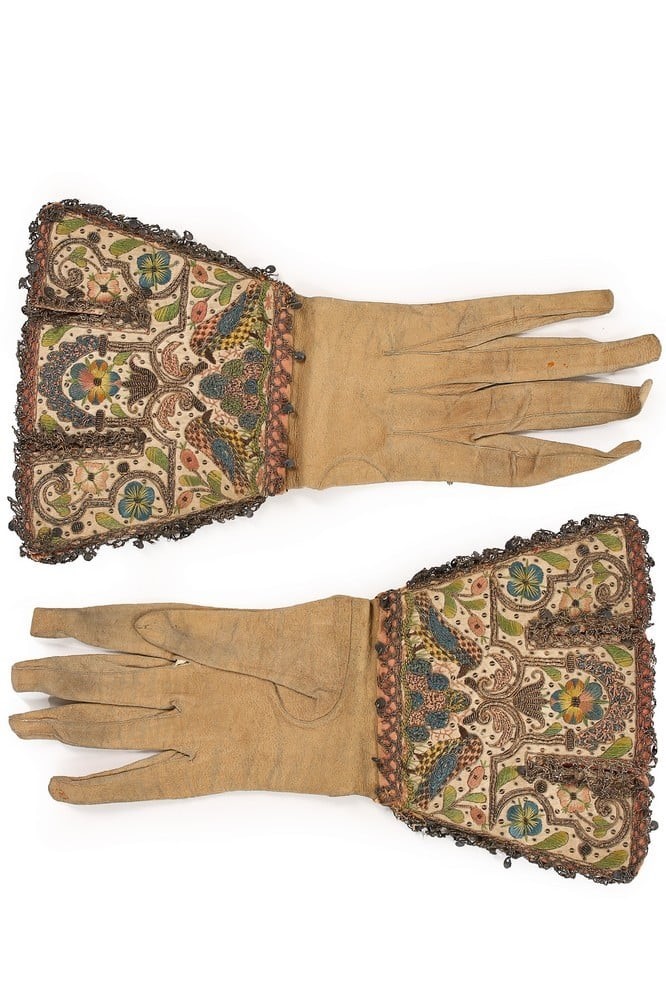 Extract from 'The Family History of the Carr Family of Woodall and Eshott' by Rev. Ralph Carr 1899, p.68:

'The procession of the High Sheriff from the "Turk's Head Inn" to the Moot Hall, and on to Sheriff Hill, to meet the Judges was in old days an occasion of great display. ...Of the procession in 1778 only two reminiscences survive. An old man who lived in the gate told John Thomas Carr that he "remembered the smart squire going out to meet the Judges with his horses shod with silver" (probably silvered over); and two most elaborate velvet saddle-covers with silver embroidery still exist - one with Mr. R. S. Carr, and one at Eshott Heugh, with a pair of lady's gauntlet gloves, most exquisitely embroidered - used by Mr. and Mrs. Carr during the proceedings, and which have been preserved as curiosities of the kind of work.'

Of her three children, nothing is known of Rebecca Rose. Her first son James was provided for in a will written by his uncle, a rich plantation owner – also called James Dixsee - dated 30th November 1785, of Burnpot Island, Chatham County, Georgia.

He bequeaths four negro slaves (July, Charlotte, Moll and Lucy) to his daughter Susannah; the remaining negro slaves, land and residue of his estate to his other children and Rebecca's son James.

However, he was never to take advantage of this inheritance. James grew up to be a strong, brave adventurer, but was taken prisoner by native Indians. A female elder of the tribe became so taken with him, that unlike the other prisoners who were cruelly tortured then killed, she wanted him for herself.  He was adopted as a member of their tribe, so impressed were they by his physical strength, valour and prowess with a rifle. He eventually escaped from them and returned to England, but found it impossible to adjust to life in London. He returned to America in search of another tribe but sadly was never heard of again.

'He was taken prisoner by Indians and afterwards returned to their life, not being able to settle down in London' (J.W. Carr letter, 1898)

Her other son Thomas William was a great comfort to her. She and her reckless husband eventually separated, his having squandered his entire fortune and lost his estates, and she went to live with her son Thomas William who worked as an articled clerk in Newcastle. Her life had been filled with trials and adventures, crossing continents several times. Despite her feckless husband and in the face of adversity, she had been a good mother. One of the letters sold with the purse from J.W Carr, Barming Rectory, Maidstone, Feb 27th 1898, reads:

'I have only heard that her sons were most warmly attached to her and held her up to his children as a woman of real presence of mind, who had by decision and promptness saved them in their lives from accident - when a girl she tied a man's vein with her gaitor, whose artery was cut in chopping and saved him. She even saved her son TWC by a prompt reduction of some sort dislocation of the neck in falling over the bannister at Eshott, and his brother William who ran a nail into his neck, which she had to hold to staunch while a man rode to Morpeth for the doctor.'

Thomas William Carr always held her up as an example to his own children. In 'The Family History of the Carr Family of Woodall and Eshott' by Rev. Ralph Carr, 1899, p.70, it is recorded that he 'wrote in a letter to his daughter Mrs. Lushington: "You will rise superior to the trials which are inseparable from the condition of a wife and a mother, and like my own dear mother will be most calm and collected when there is the greatest necessity for intellectual exertion."

Her end was very peaceful. Her son wished her "good night", she said how comfortable she was, and thanked God she had so good a son, and in the morning, she was found to have quietly passed away in her sleep. May a Colt motto be true of her and her sorrows - "Vincit qui patitur" (He conquers who suffers).

She died in April 1790 and was buried in St. John's Churchyard. Her errant husband went on to marry for a 4th time!