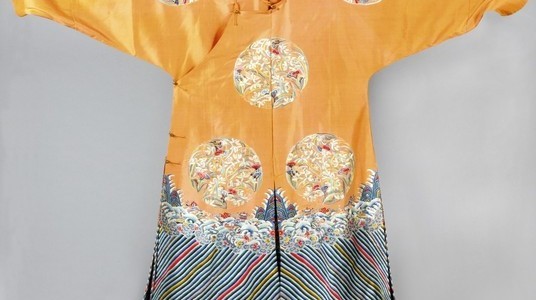 The highlights of the morning session of vintage fashion included the Charles Drecoll purple silk walking suit, circa 1914, complete with draped hobble skirt, lot 115. Everyday clothing of this period is difficult to find, and although there were slight condition issues with silk on the lapels, it was still hotly contested. Part of its appeal was derived from its provenance - it had belonged to a pretty young Russian sculptress, Olga Popoff, who fled Russia after the Revolution. It sold for £1,600.

A group of clothing belonging to the late Diana Dors (Britain’s Marilyn Monroe) also created something of a stir with intense bidding from a gentleman from Kent who saw his hopes of ownership disappear as an online bidder beat him to the chase. After Diana’s untimely death in 1984, her husband burned all of her clothes before committing suicide himself. These clothes had been passed to the daughter-in-law of her housekeeper who has had them ever since. They sold for £1,400.

However, it was the afternoon session that really took off. The saleroom was packed with international buyers (private collectors and the trade) who battled it out against ranks of telephone bidders and the internet. It was great to see such enthusiasm for a textile sale!

The session opened with Chinese robes and textiles and the bids quickly soared. The beautiful apricot silk dragon robe which had been brought back by an Italian officer at the time of the Boxer rebellions (estimate £4,000-6,000) sold for £10,000. He had photographed friends and family posing in the robe in 1900. The brown satin dragon robe (estimate £2,500-3,500) made £7,000 and the delicately-embroidered red silk wedding robe (estimate £500-700) made £3,400.

Perhaps the most important part of the collection were the central Asian textiles. The rainbow-coloured ikat robes and lavish gold thread embroidered noblemen’s robes made a stunning pre-sale exhibition as they shimmered under the lights. 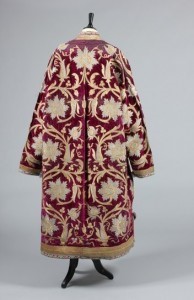 The embroidered magenta robe (my personal favourite) sold for £9,000, and the companion robes similar, for £7,000 a piece.  There was strong interest from Russian museums and private collectors and a simple damask sarafan dress sold for £3,000.

The sale ended with a very strong lace section with buyers flying from Japan and all over Europe to attend. The highest single price was £2,200 which is a record for a Youghal collar and satisfyingly was taken back home to its place of origin – Ireland.