Royal Fashion: The Windsor Women and the Duke of Wellington's garments in our 18th June auction

Royalist fervour reached fever-pitch in Britain over recent weeks, with miles of red white and blue bunting flag waving crowds and wall to wall press and TV coverage for the Royal wedding of Prince Harry and Meghan Markle – but it doesn’t end there.

Here at Kerry Taylor Auctions we have sourced unique, rare and historically important royalty related pieces, some of which were keepsakes of Royal nanny Clara Knight. Nanny ‘Allah’, as the infant Princesses Elizabeth and Margaret, came to call her (a derivation of her true name, which they initially found difficult to say), worked in the Royal Household from the birth of Princess Elizabeth in 1926. She was in charge of the Royal nursery but when Princess Elizabeth was five, a Scottish governess (22 year old Margaret MacDonald or ‘Crawfie’) was added to the household and two women held an uneasy rivalry for the affections of the little Princesses. Nanny Allah’s keepsakes included baby clothes, pretty floral infant frocks, nightdresses and knitwear.

The earliest and arguably most rare Royal garment from Nanny Allah’s collection is the little pink silk coat worn by H.M. The Queen as a baby, 1927. (Above)  Princess Elizabeth was photographed wearing the coat aged 11 months, under the stern, watchful gaze of her nanny. 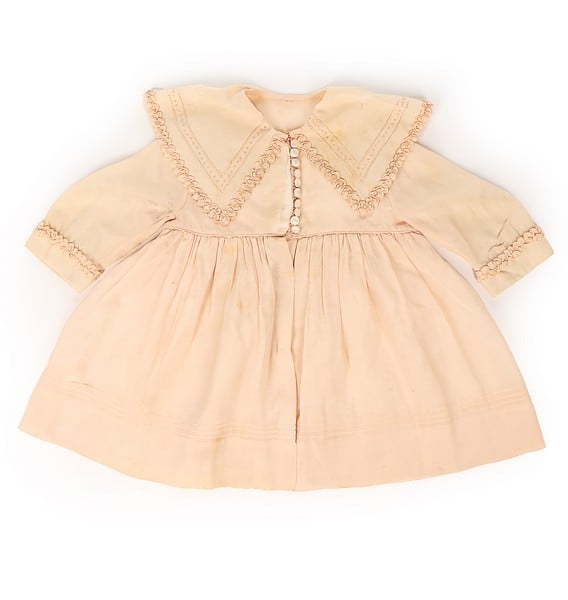 Clara had previously worked as nanny to Elizabeth Bowes Lyons (Duchess of Kent and later Queen Elizabeth, the Queen Mother) at Glamis castle in Scotland and her attitude to childcare was quite Edwardian in outlook. She was a no-nonsense Hertfordshire woman who believed in a strict regime and ‘hard’ love. Meals, lessons, playtime, bathtime, bedtime all followed a strict timetable and if a child cried in protest – they were left to get on with it.

Princesses Elizabeth and Margaret awoke at 7.30am, breakfasted in the nursery then joined their parents for 15 minutes before starting lessons. At 11am there was a half hour break for a glass of orangeade and a biscuit. Lunch was at 1.15pm, which they ate with their parents when they were a little older, if their parents were at home. The afternoons were spent out of doors or knitting, studying music if the weather was poor. Tea was at 4.45pm. Between 5.30 and 6.30 their mother came to play followed by supper – 7.15 was bedtime.

Below: Lot 172, a pair of knitted wool nightdresses, belonging to Princess Elizabeth and Princess Margaret, circa 1935. Estimate £1000-1500

Both Princesses wore matching clothing throughout their childhood, with little or no change, whatever the prevailing fashions of the day. The styles were identical – but made in different colour-ways. The dresses were usually of Liberty-style prints, with frilled trimmings and peter pan collars, sometimes with additional smocking. Knickers were also made to match. Coats tended to be plain, warm and functional. Nanny Allah was a stickler for neatness. Governess Marion Crawford recalled,

‘Until I came she (Princess Elizabeth) had never been allowed to get dirty. Life had consisted of drives in the park, or quiet ladylike games in Hamilton Gardens, keeping to the path; or leisurely drives around London in an open carriage, waving graciously to people when Allah told her to do so’.

Below: Lot 170, a pair of matching floral cotton dresses worn by Princess Elizabeth and Princess Margaret, circa 1936. Estimate £2000-3000 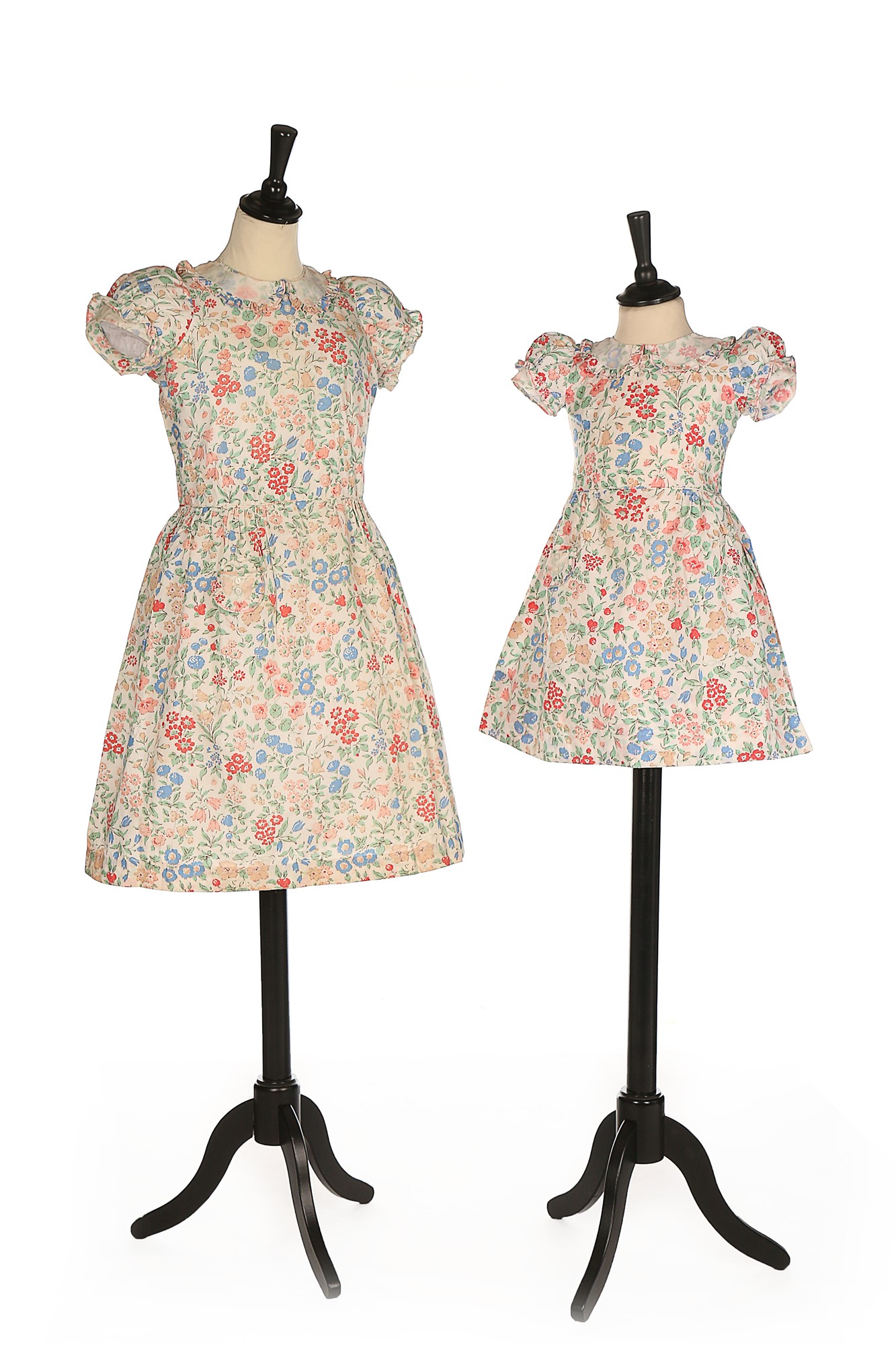 Even during the war, despite fire drills and air-raids, Allah continued with the strict daily routine and neatness of dress.  During the Blitz, when an air raid siren had gone off, Allah took so long getting the Princesses dressed, that the governess was sent to the nursery to order them to leave which can’t have helped relationships between the two women.

Our second Royal collection relates to Princess Margaret, who gifted fourteen dresses and various accessories to a favourite Italian born maid – Maria Roattino, who worked for her for several decades.

After the sartorial restraint of her childhood, and the privations and restrictions of the war, the beautiful young Princess was keen to explore the world of fashion, which included romantic creations by Christian Dior. It was against Royal protocol at the time to wear fashions that were not made in Britain or by British designers, but she broke this rule straight away, choosing to wear a beautiful Dior white ballgown for her 21st birthday photograph. However, her sister Queen Elizabeth continued to wear be-jewelled creations by Court Dressmaker Norman Hartnell.

Princess Margaret made regular visits to Dior in Paris in 1949, 1951 and 1959, and also attended Dior fashion shows at Blenheim Palace in 1952, 1954 and 1958. M. Dior described her as ‘real fairy-tale princess, delicate, graceful, exquisite’. Her love affair with Dior continued throughout her lifetime and we include two dresses and a personalised Dior headscarf. 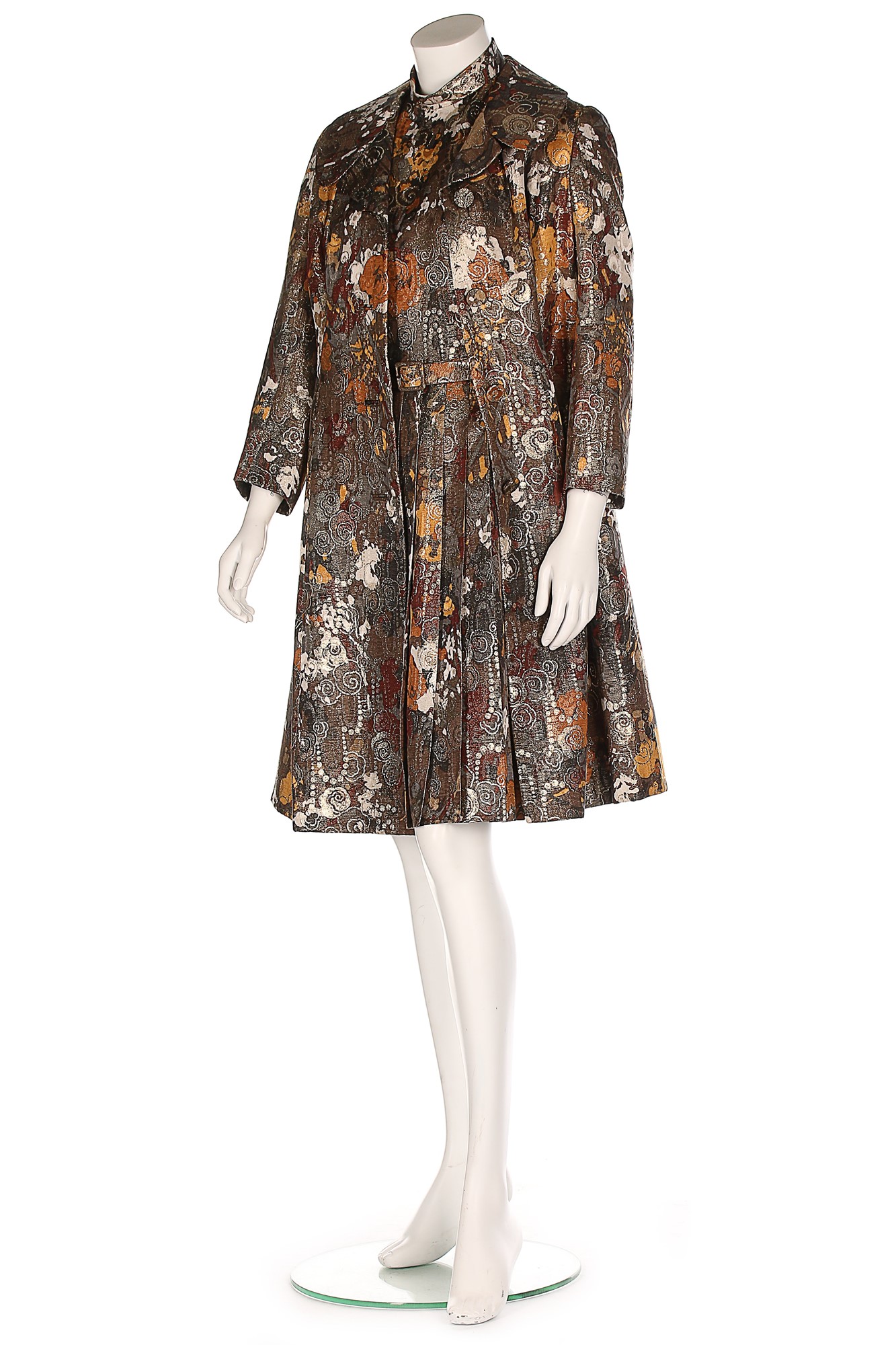 Princess Margaret was photographed wearing the below dress when she opened the Ideal Home exhibition, 4th March 1975. She was photographed wearing it again on 3rd March 1976 when it was formally announced to the press that the Princess and Lord Snowdon had mutually agreed to live apart.
Below: Lot 175. Princess Margaret’s Christian Dior London printed wool day dress, 1975. Estimate £400-600 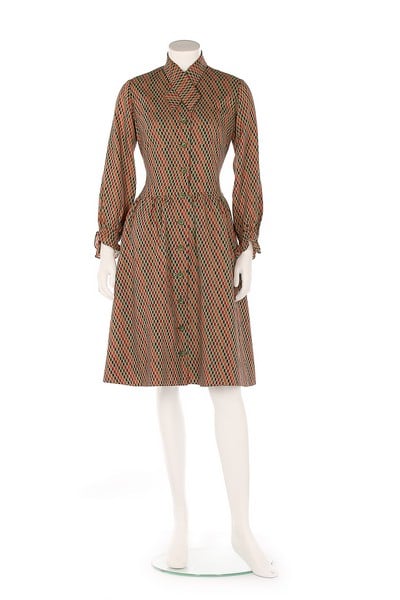 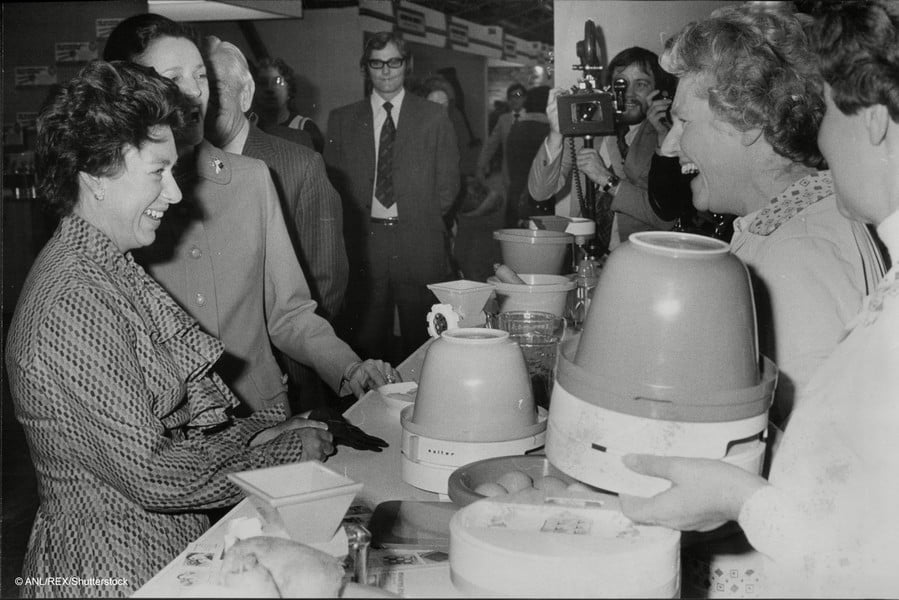 Princess Margaret’s style became more exuberant during the 1960s and early 70s. Kaftans, in particular, became something of a signature look. They could be worn with ease at a gala dinner or to a beach-side cocktail on the island of Mustique where she loved to holiday. The London based designer Thea Porter was a favourite of Princess Margaret in the late 1970s and she was frequently photographed wearing her exotic, orientalist garments. 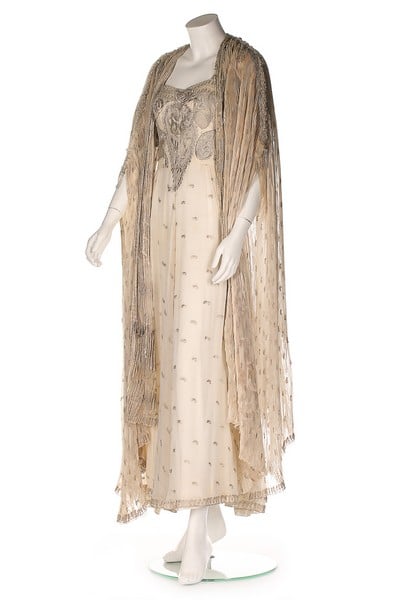 Princess Diana is also well represented with a collection of fashion sketches of some of her more memorable outfits by one of her favourite designers – Victor Edelstein – as well as a letter of thanks written to him. 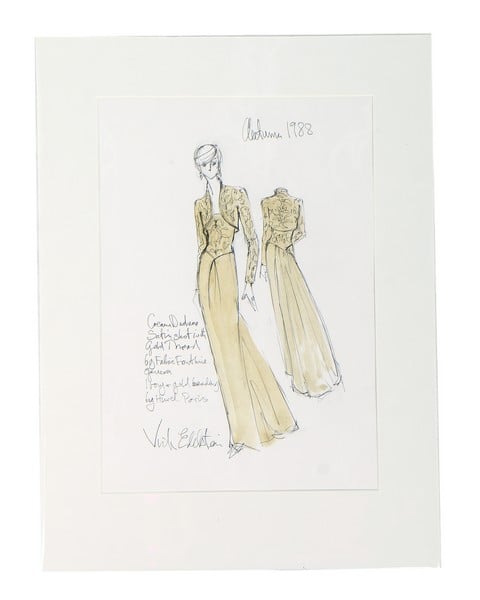 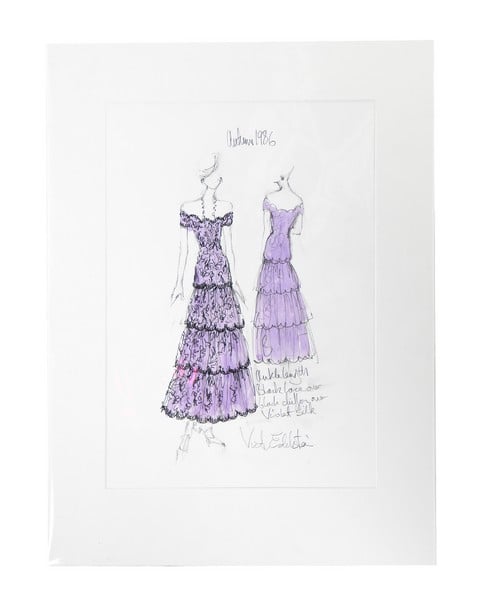 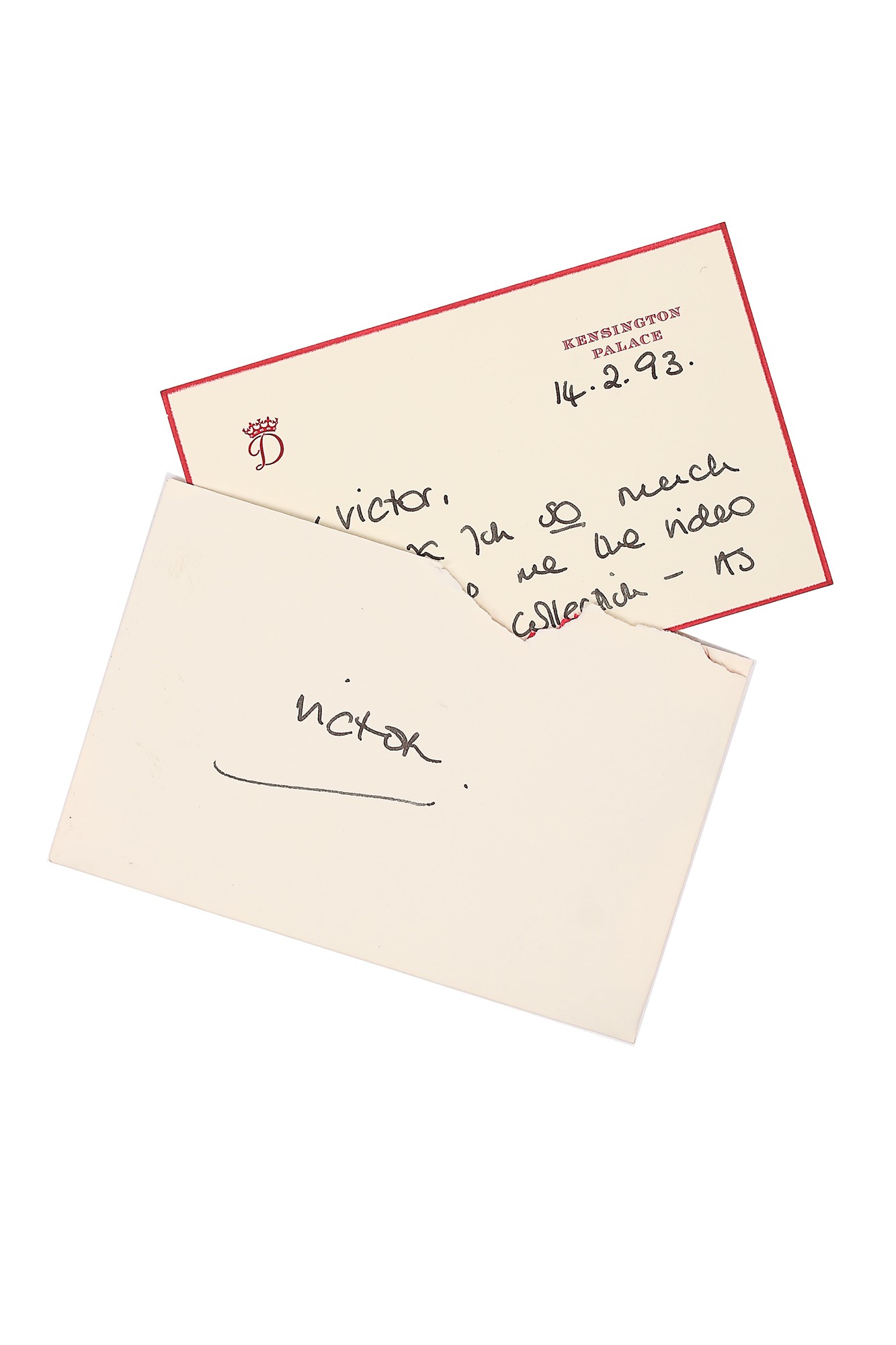 Collectors who would like a Princess Diana dress, but can’t ford £100,000 that the original would cost – might be interested in lot 193, a Catherine Walker couture beaded blue-grey Taroni silk cocktail dress, similar to the one worn by Princess Diana to a gala preview for her dress auction in London, 2nd June, 1997 (estimate £2000-3000).

Very few of these dresses were produced. Although part of the main collection, Mr Said Cyrus Ismail of Catherine Walker recalls that there may have been just two. 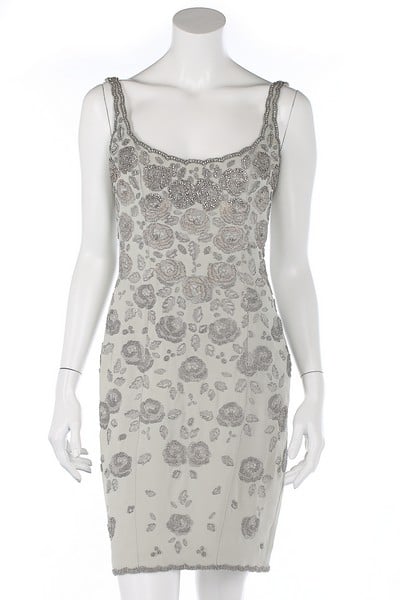 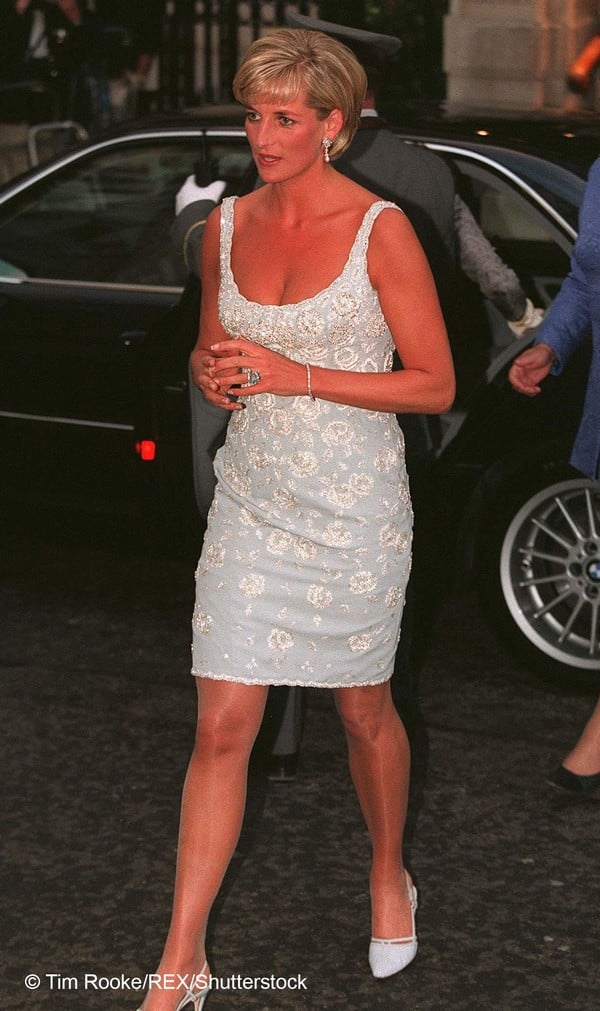 The 18th June, the day of the auction, is also the 203rd anniversary of the Battle of Waterloo. It is therefore highly appropriate that we have two fashion garments that belonged to the Duke of Wellington, who defeated Napoleon and the French Army on this day in 1815.

These two fashion related relics are quite humble and belie the grandeur, stateur and military pomp of this great British statesman. 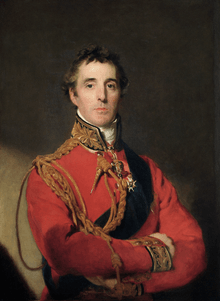 The first is a much worn, and indeed frayed, soft lawn undershirt which is embroidered in fine cross stitch with the W cypher below a coronet, with an attached note, ‘This vest belonged to Arthur, Duke of Wellington and was given to (Dr) FAB Bonney by his patient Mr Collins soon after the death of his master, the great Duke of Wellington in 1853’ (a year after the Duke’s death). The Mr Collins referred to is probably the Duke’s personal confidential secretary, Christopher Collins, who worked for him from 1824 until the Duke’s death in 1852. He continued in the service of the the second Duke into the 1860s. The Duke obviously liked comfort, the lightweight undergarment with the coarser cotton layer sandwiched between two gossamer fine and soft layers of finest lawn linen. 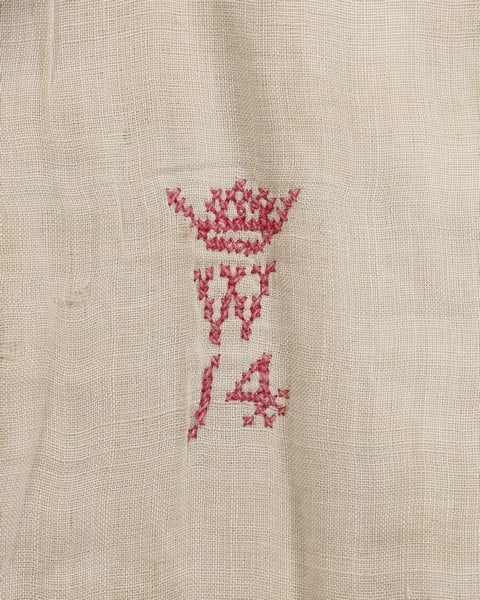 Lot 166 is a pair of the Duke’s military style trousers of heavy navy worsted, with black braid side stripes, which also bears a handwritten provenance note. Practical and hard-wearing, they have button flies, side pockets and hidden in the waistband a smaller pocket to take a sovereign or pocket watch. The hem bears the remains of black wool stirrups, which would have fastened under the heels of the Duke’s boots to give a taut, clean line. It seems that the Duke was a slender fellow, having 28 to 32 inch waist. Estimate £600-1000 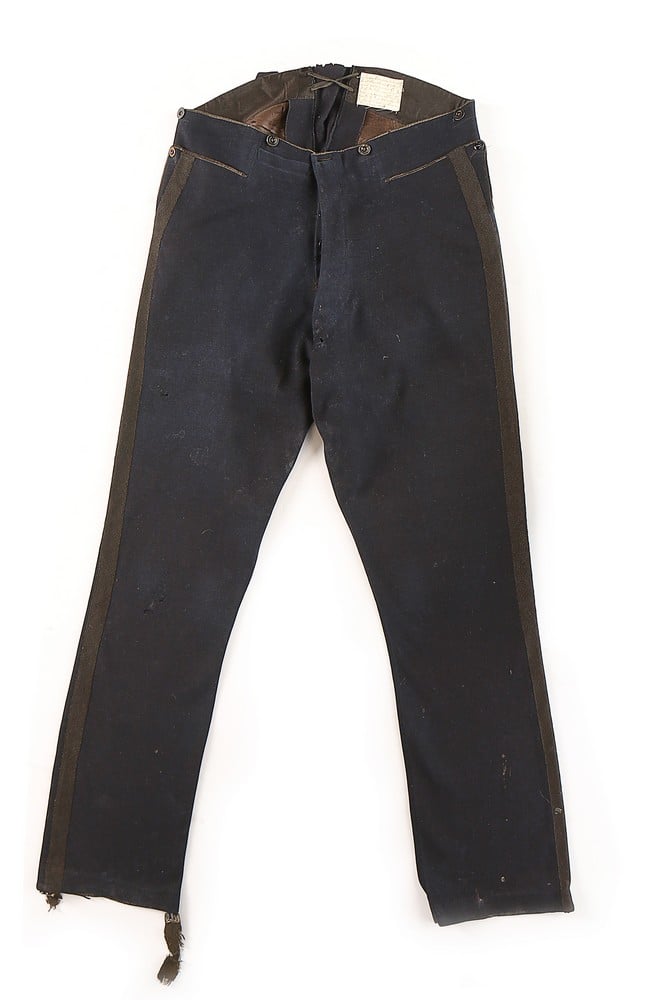 Both pieces are fresh to the market and have remained within Dr. Bonney’s family since they were gifted 165 years ago. They have spent most of this time stored away in boxes in the attic. The family hopes that they will be purchased by a military museum or private collector who will properly appreciate and care for them.
‘Passion for Fashion’ auction, Monday June 18th
10.30am: Session 1, lots 1 to 164
2pm: Session 2, lots 165 to end of sale
Venue: 249-253 Long Lane, London, SE1 4PR
Viewing: Friday June 15th, 9-5pm, and Sunday June 17th, 11-4pm