Lots 441 to 463 in our October 8th auction
Of Hungarian birth, Marta grew up in Budapest where she studied music. She writes:‘Mercifully I survived the Nazis, but the following regime was hardly an improvement. So many people wanted to leave, that the government closed the frontiers in order to keep them in!’

As a concert pianist, she was given special permission to travel abroad to participate in an International competition but instead of returning home, she defected to the West, eventually ending up in Australia. There she met and eventually married a Scottish violinist – Maurice Clare – and they toured the world together as a violin piano duo (see below). 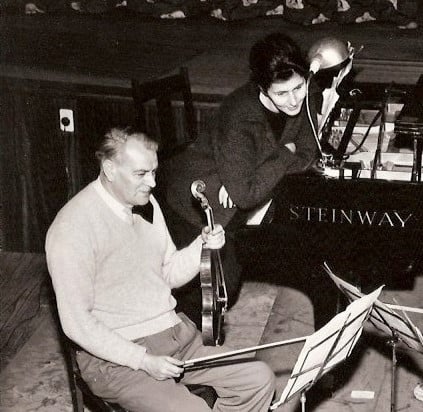 Their interest in antique shawls began after they moved to London on the 1970s and it became something of a joint passion.

Marta recalls:‘During the 1970s I began to study and build up a library, and the more I learned, the more interested I became. I was fascinated by the history of the shawl, the materials used to make them, the designs, the techniques of weaving in India and France, how the shawls changed and adapted to match the prevailing fashions of the day. These all became subjects of great interest to both me and my husband. We scoured the auction rooms but also street markets, junk shops, in the UK and abroad.  I remember finding a shawl literally on the pavement in a street market in Paris. I took it to show to the illustrious V&A expert Wendy Hefford, who was beside herself with excitement, exclaiming: “I have always known this shawl from the catalogue of the 1839 Paris exhibition, but never actually had one in my hand!”. Then she showed us the illustration and it was the same!’ 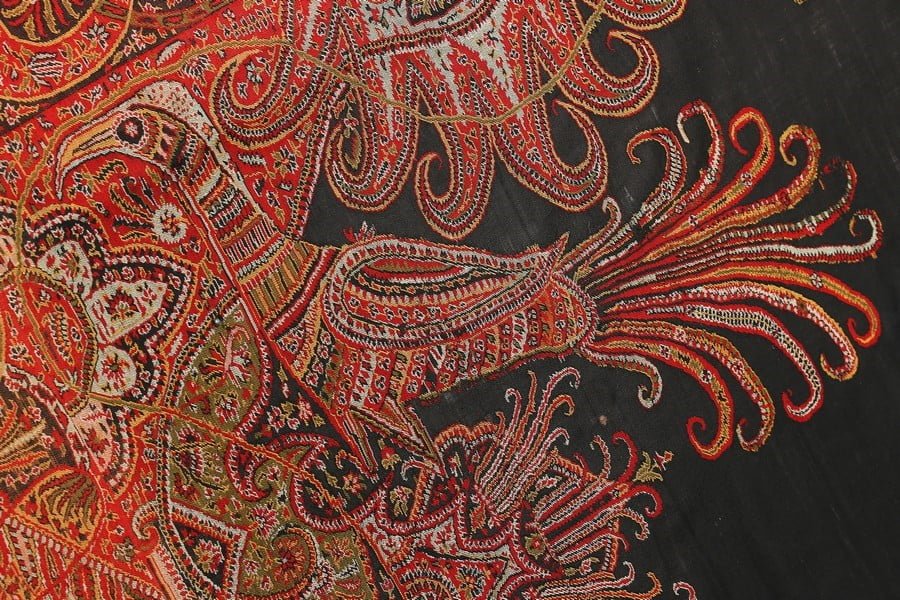 The collection includes rare and early Kashmir examples, similar to that Madame Rivière draped over her arm in the famous 1805 portrait by Ingres (image below), see lots 444 and 459. 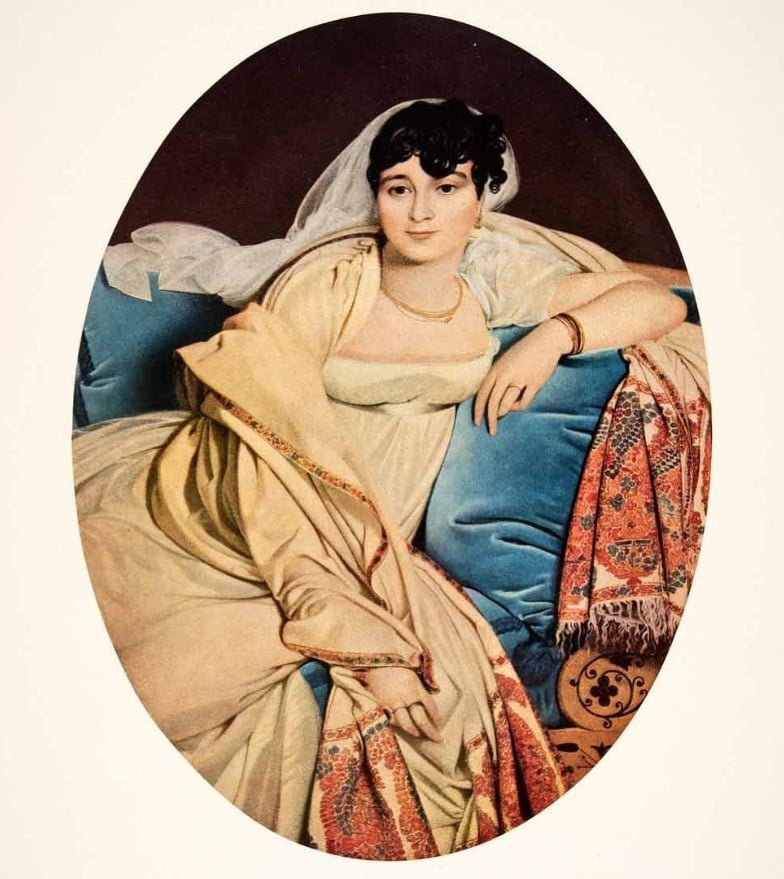 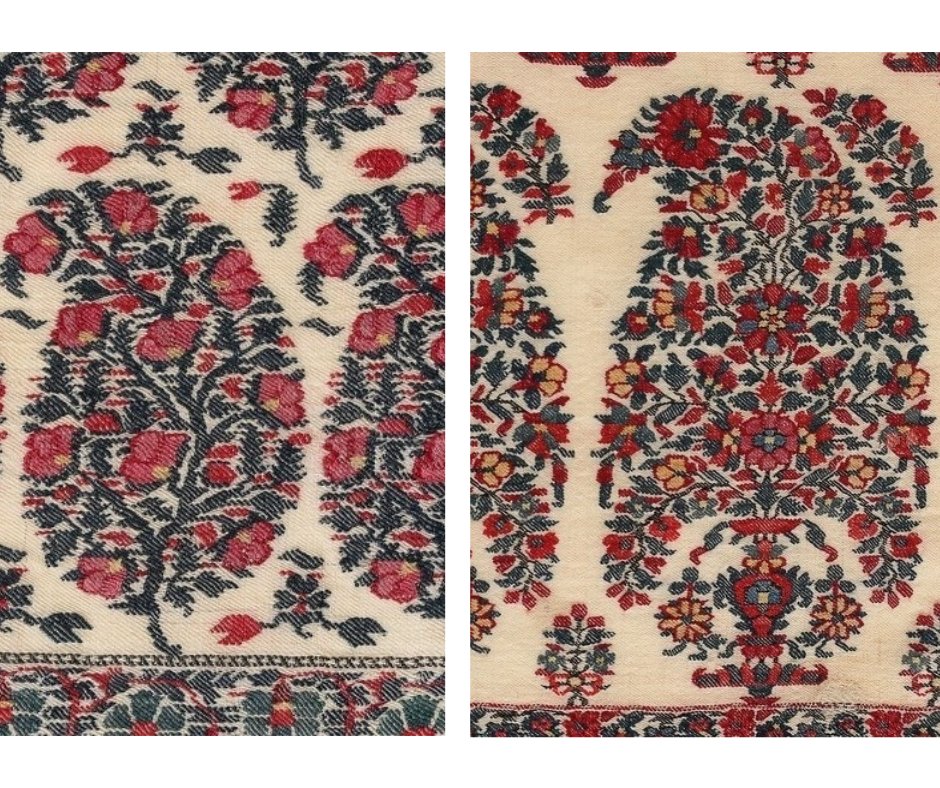 Imported hand-woven Kashmir shawls were a luxury only the wealthy could afford, therefore imitations sprang up all over Europe. Here in the UK, shawls were woven in Paisley, Edinburgh and Norwich, and French shawls in particular were renowned for their imaginative designs and intricate weaves, which reached its zenith in the 1860s.  The sizes and shapes of shawls changed with clothing fashions. In the late 18th and early 19th century they tended to be long and stole-like with deep boteh borders at both ends as seen in the Madame Rivière portrait above.

By the 1830s, shawls had become more square in shape with fabulous meandering borders on all four sides. Printed wool shawls were also produced which gave the effect of the lavish ‘paisley’ patterns but were more affordable and accessible. Some of these have particularly lovely naturalistic patterns, reflecting indigenous ferns or sea-weed. 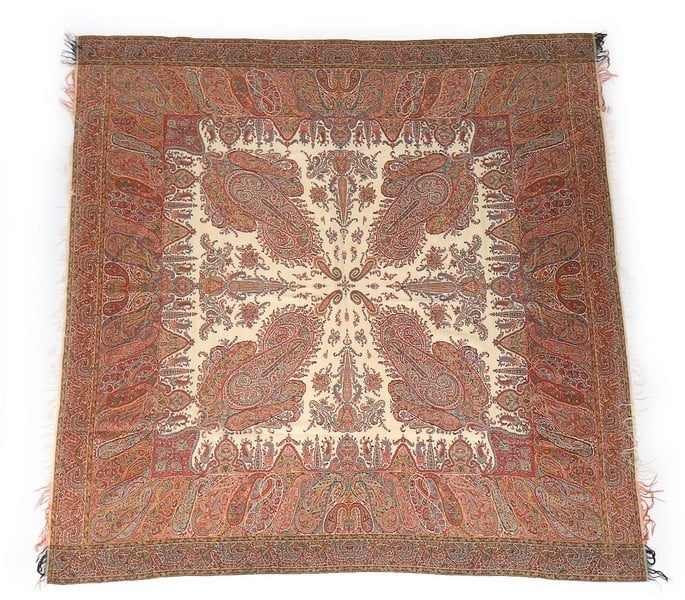 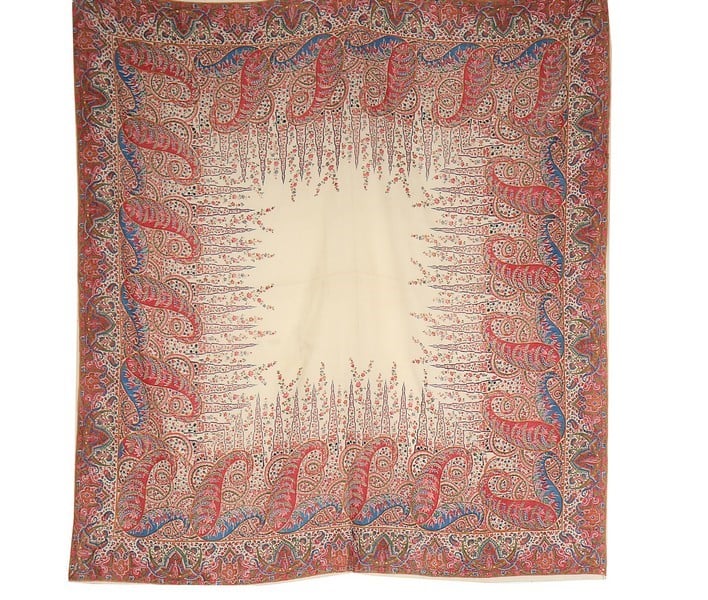 Below: A fashion plate from 1835, showing how shawls were worn 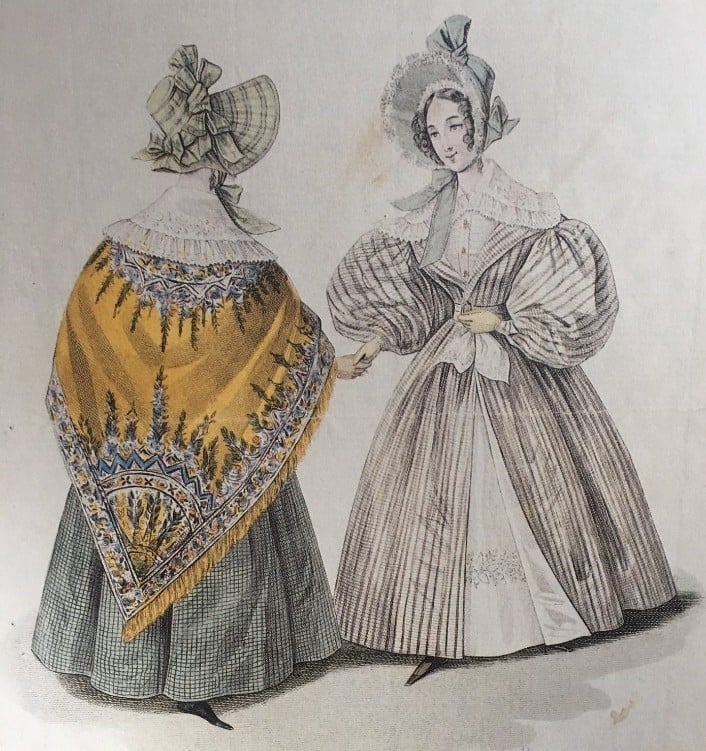 By the 1860s, dresses with long oval crinoline hoops meant that the wearing of coats became impractical as they simply wouldn’t fit over the voluminous skirts. Shawls reached their largest proportions, usually around 3.5 metres in length – woven in wool for colder months and of printed silk gauze for summer, which decoratively draped over the dresses. Both Kashmir and European shawls become incredibly complex in their patterns at this point.

Below: A fashion plate from 1865 showing how shawls were worn at this time 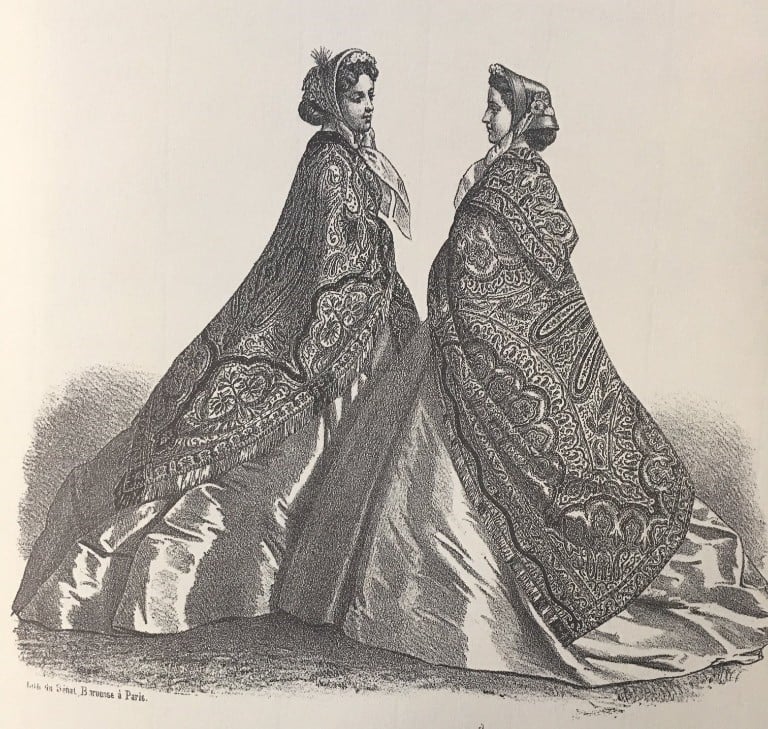 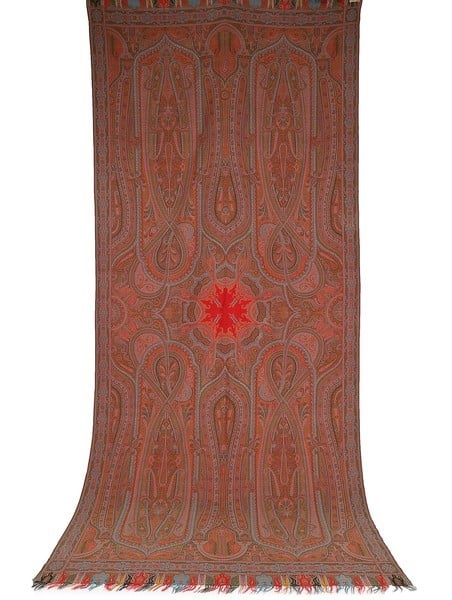 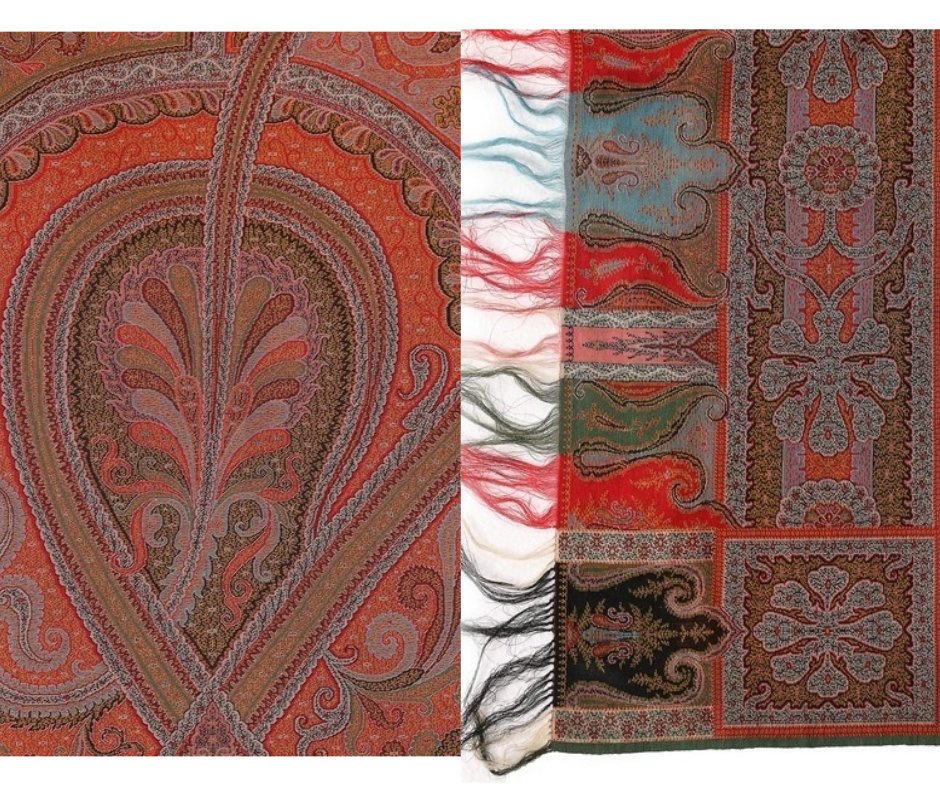 By the 1870s the designs became more repetitive and less voluptuous and shawls fell from favour as special jackets and coats called ‘Visites’ replaced them (see lot 402), specially designed to fit over the new, narrower bustle cages.

Marta’s collection spans all decades and manufacturing centres – from the finest hand woven Kashmir shawls to those of printed wool worn everyday by the humbler classes. She and her husband enjoyed the search and discovery, relished the study and the sheer pleasure of collecting such aesthetically pleasing pieces. However, now aged 90, Marta feels it is time to let go – possibly for them to be acquired by major fashion collections as essential accessories to the gowns, but also to specialist collectors who, like her, appreciate them in their own right. All the proceeds will be donated to Moorfields Eye Hospital, in particular the Retinal Therapy Unit who do such valuable and life changing work.

The Marta and Maurice Clare Shawl Collection: Lots 441 to 463