On the 8th September 2022, our nation mourned the death of Her Majesty Queen Elizabeth II.

“We mourn profoundly the passing of a cherished Sovereign and a much-loved Mother. I know her loss will be deeply felt throughout the country, the Realms, and the Commonwealth, and by countless people around the world. During this period of mourning and change, my family and I will be comforted and sustained by our knowledge of the respect and deep affection in which the Queen was so widely held.”

Born on the 21 April 1926, in a house just off Berkeley Square in London, she was the first child of Albert, Duke of York, second son of George V, and his duchess, the former Lady Elizabeth Bowes-Lyon. At the time of her birth, she was not in direct line of the throne, however fate had other plans, and following the shocking abdication of her Uncle, King Edward VIII, in 1936, the young Princess was now destined to be Queen. 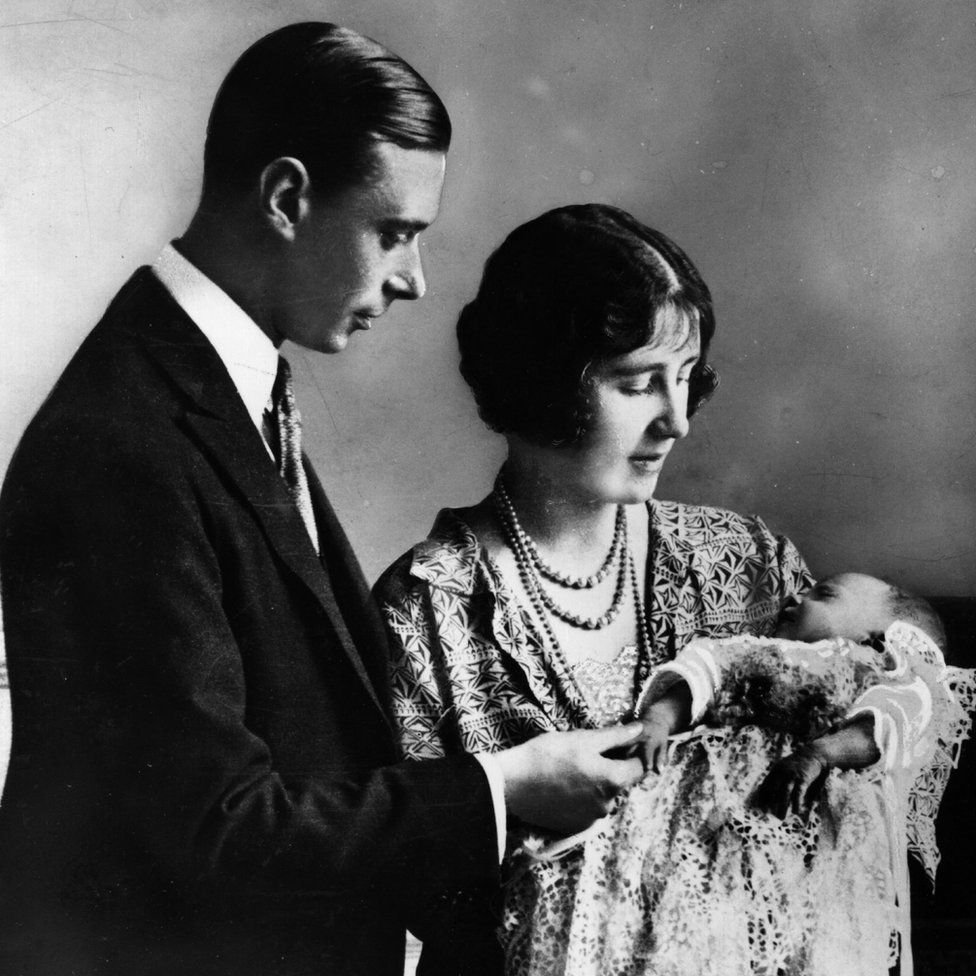 The Queen pictured as a baby with her parents, the Duke and Duchess of York, as they were then

In 2019, we had the immense privilege of auctioning a rare collection of items worn by Princesses Elizabeth and her younger sister, Princess Margaret. The items had been lovingly kept by the Royal nanny, Clara Knight. Clara had sent many of the items in parcels each Christmas to her nieces in Bexhill, presumably once the Princesses had outgrown them. Having lived through the privations of two wars, the prevailing credo for both the Royal family and their staff was 'waste not, want not'. These historically important and sentimental items were sold with a copy of an official letter from Sandringham House acknowledging the vendor's possession of the clothes on behalf of H.M. The Queen.

Part lot 169, a pink silk coat worn by H.M. The Queen as a baby, 1927, together with a photograph of Princess Elizabeth, aged 11 months, wearing this coat accompanied by her nanny 'Allah' Knight; with a reproduction pink silk bonnet; sold for £6,000 hammer on 18/06/18

Nanny ‘Allah’, as the infant Princesses came to call her (a derivation of her true name, which they initially found difficult to say), worked in the Royal Household from the birth of Princess Elizabeth in 1926. Nanny Allah’s keepsakes included baby clothes, pretty floral infant frocks, nightdresses. Knitwear and a rare and precious doll. The earliest and arguably most rare Royal garment from Nanny Allah’s collection is the little pink silk coat worn by H.M. The Queen as a baby, 1927 (above). Princess Elizabeth was photographed wearing the coat aged 11 months, under the stern, watchful gaze of her nanny.

Part lot 226, Princess Elizabeth's baby vest and printed cotton knickers, circa 1929, together with a copy of a photograph taken by Marcus Adams of the infant Princess; sold for £5,500 hammer on 10/12/18

Part lot 225, Princess Elizabeth's red and white printed lawn day dress, circa 1931, together with a photograph of the dress being worn by the Princess atop a wind-up gramophone with her baby sister beside her; sold for £10,000 hammer on 10/12/18

Clara had previously worked as nanny to Elizabeth Bowes Lyons (Duchess of Kent and later Queen Elizabeth, the Queen Mother) at Glamis castle in Scotland and her attitude to childcare had quite an Edwardian outlook. She was a no-nonsense Hertfordshire woman who believed in a strict regime and ‘hard’ love. Meals, lessons, playtime, bathtime, bedtime all followed a strict timetable and if a child cried in protest – they were left to get on with it. Princesses Elizabeth and Margaret awoke at 7.30am, breakfasted in the nursery then joined their parents for 15 minutes before starting lessons. At 11am there was a half hour break for a glass of orangeade and a biscuit. Lunch was at 1.15pm, which they ate with their parents when they were a little older, if their parents were at home. The afternoons were spent out of doors or knitting, studying music if the weather was poor. Tea was at 4.45pm. Between 5.30 and 6.30 their mother came to play followed by supper – 7.15 was bedtime.

The young Princesses photographed with their Corgi, June 1936

Both Princesses wore matching clothing throughout their childhood, with little or no change, whatever the prevailing fashions of the day. The styles were identical – but made in different colourways. The dresses were usually of Liberty-style prints, with frilled trimmings and Peter Pan collars, sometimes with additional smocking. Knickers were also made to match. The most photographed dresses within the collection were a pair of Smith & Co Liberty printed silk examples, each with matching pair of knickers. Clearly favourites, they were worn by the Princesses on numerous occasions including watching a pantomime performance accompanied by the Duke & Duchess of York, Lyceum Theatre, 6th February 1935, and Princess Elizabeth and her mother walking a corgi, playing with their cousin Margaret Rhodes, née Elphinstone.

Part lot 16, a good pair of Smith & Co Liberty printed silk dresses worn by Princess Elizabeth and Princess Margaret, 1935; sold for £26,000 hammer on 17/06/19. The Princesses were photographed in these outfits on several occasions - image of the Princesses with their cousin copyright of Margaret Rhodes

Nanny Allah was a stickler for neatness. Governess Marion Crawford recalled,‘Until I came she (Princess Elizabeth) had never been allowed to get dirty. Life had consisted of drives in the park, or quiet ladylike games in Hamilton Gardens, keeping to the path; or leisurely drives around London in an open carriage, waving graciously to people when Allah told her to do so’. .Even during the war, despite fire drills and air raids, Allah continued with the strict daily routine and neatness of dress. During the Blitz, when an air raid siren had gone off, Allah took so long getting the Princesses dressed, that the governess was sent to the nursery to order them to leave!

A second charming pair of Liberty-style print floral dresses with matching knickers were worn by Princesses Elizabeth and Margaret, circa 1937, when the girls were around 11 and 7 years of age. The little girls grew up behind the Palace walls, with no outside schooling and became each other’s best friend and playmate. These two sweet little dresses illustrate the 4-year age difference between the sisters. Elizabeth’s dress has had the bodice let out and altered to fit her as she grew and was an obvious favourite – Margaret’s less so as the print is bright and fresh and less laundered.

Another precious memento from the Princesses’ childhood which was passed down to their nanny’s nieces was a rare doll by Chad Valley, circa 1935. The doll’s wardrobe included her original turquoise and white muslin dress, but also homemade silk nightdress and a very stylish turquoise tweed coat, possibly made by the Princess with the help of her nanny or governess. The Chad Valley toys were sometimes dubbed ‘Toys for Toffs’ as they were well made and used high-quality fabrics and consequently, they were expensive. The Chad Valley company went on to make dolls in the likeness of Princesses Elizabeth and Margaret. Much to their surprise, the Queen (mother) gave permission as her daughters already had their own much-loved Chad Valley dolls in their toy box. This doll pre-dates the Chad Valley Royal warrant which was awarded in 1938.

Her Majesty The Queen photographed by Dorothy Wilding, 1952