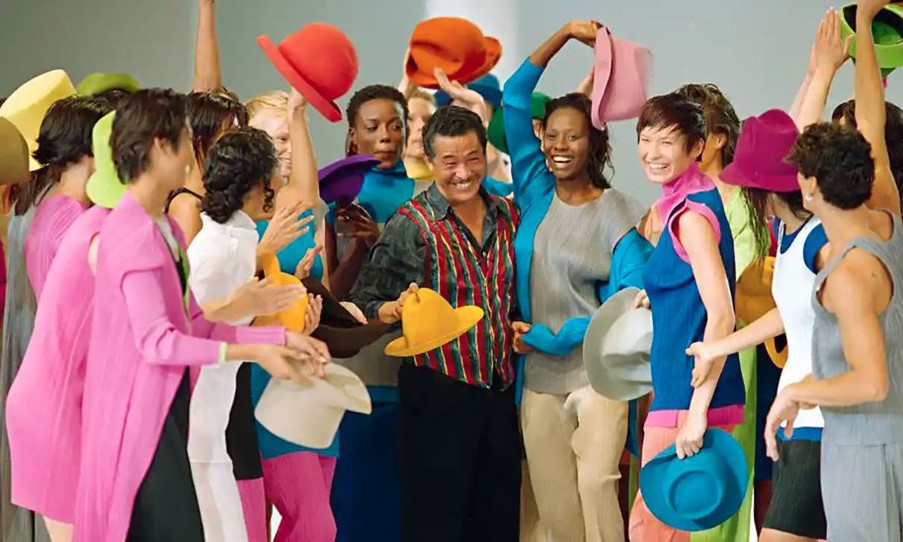 The Remarkable Life of Issey Miyake

‘I am always thinking of tomorrow’, Issey Miyake once commented to journalist Dana Thomas. The Japanese designer, who recently passed away aged 84, delighted in exploring the unknown - his career was one of ceaseless experimentation. Beginning his eponymous label in 1970, his designs, somehow, still look ‘modern’ to this very day.

Born in Hiroshima, Japan, in 1938, Miyake was intrinsically influenced by his homeland and embraced the ancient principles of traditional Japanese clothing. However, he was an individual who gazed at the world with eyes wide open, drawing inspiration from just about everything his eyes fell upon: the coiling bark of an African tree became pleated, tubular dresses; explosions of gunpowder became graphic prints. He disliked categorisation or being put in a box: ‘When I first began working in Japan, I had to confront the Japanese people’s excessive worship of things foreign and fixed idea of what clothes ought to be. I began by working to change the rigid formula for clothing that the Japanese followed even though it did not take into account their lifestyles or environment. Today I am creating things that break through national boundaries’ (‘Bodyworks’, 1983). As an apprentice in Paris during the 1960s, Miyake realised that ‘what was supposed to be a disadvantage - my lack of Western heritage - could really be an advantage. It freed me. I had nowhere else to go but forward… In Japanese, we have three words, ‘yōfuku’, which means Western clothing; ‘wafuku’, which means Japanese clothing; and ‘fuku’, which means clothing. It can also mean good fortune, a kind of happiness. People ask me what I do. I don’t say yōfuku or wafuku. I say I make happiness’ (1988, ‘Issey Miyake, photographs by Irving Penn’). 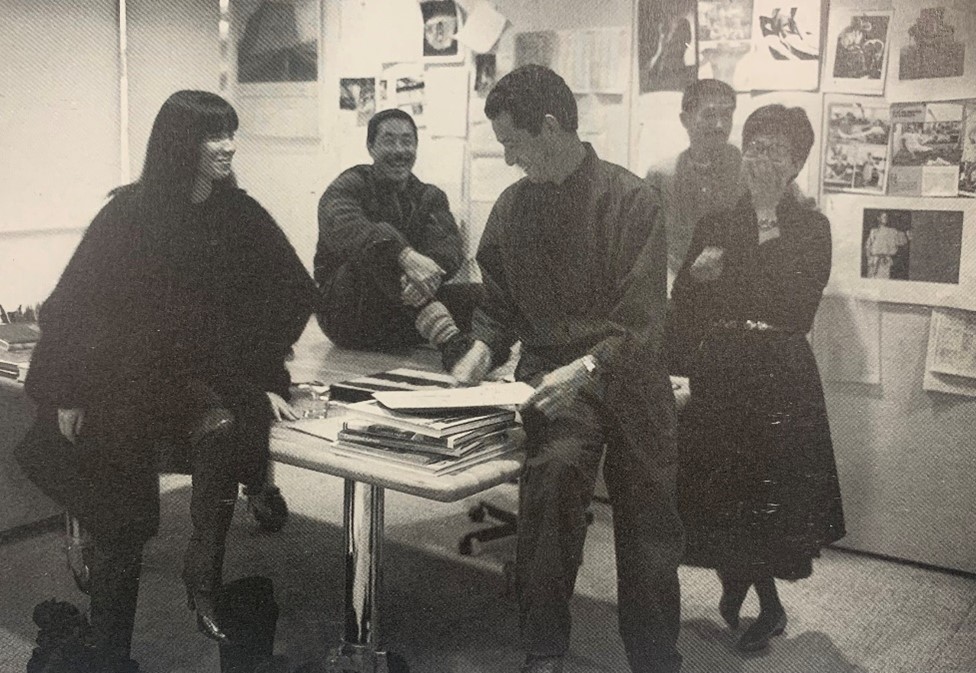 ‘I’m always telling people to get out all those failures they’ve got stuffed away in storage. New possibilities are hidden in such failures’ - Issey Miyake, photographed with his team at work (Bodyworks, 1983)

When giving interviews, he also preferred not to discuss his place of birth, once remarking that he did not wish to be known as ‘the designer who survived Hiroshima’. However, it is a fact which is unavoidable when recounting his remarkable life. And in 2009, as American President Barack Obama pledged ‘to seek peace and security in a world without nuclear weapons’, Miyake was compelled to speak publicly on the subject:

‘When I close my eyes, I still see things no one should ever experience: a bright red light, the black cloud soon after, people running in every direction trying desperately to escape. I remember it all. Within three years, my mother died from radiation exposure. I have never chosen to share my memories or thoughts of that day. I have tried, albeit unsuccessfully, to put them behind me, preferring to think of things that can be created, not destroyed, and that bring beauty and joy’

Seven-year-old Miyake also suffered from radiation exposure but survived, and as he grew into adulthood he found himself gravitating towards the unlikely field of fashion design - a creative discipline he viewed, in his own words, as ‘modern and optimistic’. The atomic atrocity brings a more poignant understanding to the thought process behind his work: when describing the inspiration behind his internationally best-selling fragrance ‘L'Eau d'Issey’, he stated: ‘The best fragrance is the scent of water, the fragrance of dew and rain falling on plants. Water is the essential element, a source of life and energy’. As a child, he experienced first-hand the unbelievable cruelty in the world - the very worst of human creation. Yet as an adult, he chose to contribute only the very best. His vision of the world was one of inclusivity: he embraced and emboldened black models from the very beginning of his career, and in 1976 he presented ‘Issey Miyake and Twelve Black Girls’: an entirely new type of ‘fashion show’, combining theatre, dance and performance art. The cast was exclusively black and featured the then-unknown face of Grace Jones. Miyake cast her in the leading role, Jones later recounted in her memoirs: ‘not as a singer, not a model, not a dancer, not an actress, not a performance artist: all of that together, and therefore something else’. The casting was the platform which catapulted her career into the echelon she so deserved. Their creative partnership would become a lifelong friendship. Grace Jones personifies so much of the sentiment behind his work: vibrancy, bravery and joy.

The cast of ‘Issey Miyake and Twelve Black Girls’ in 1976, with Grace Jones centre 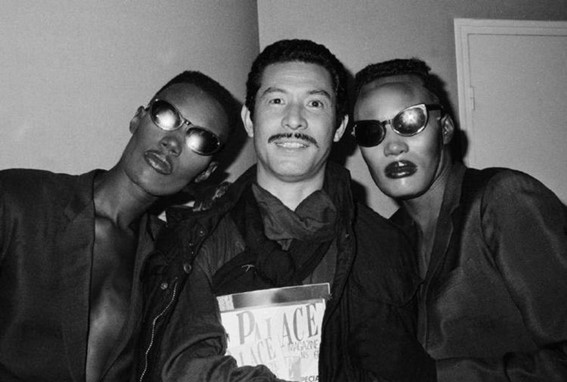 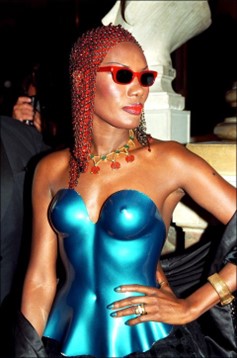 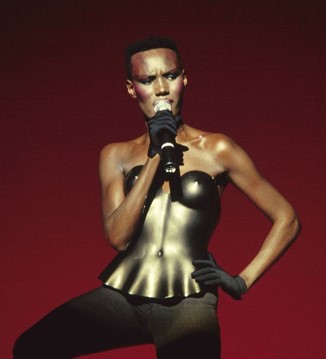 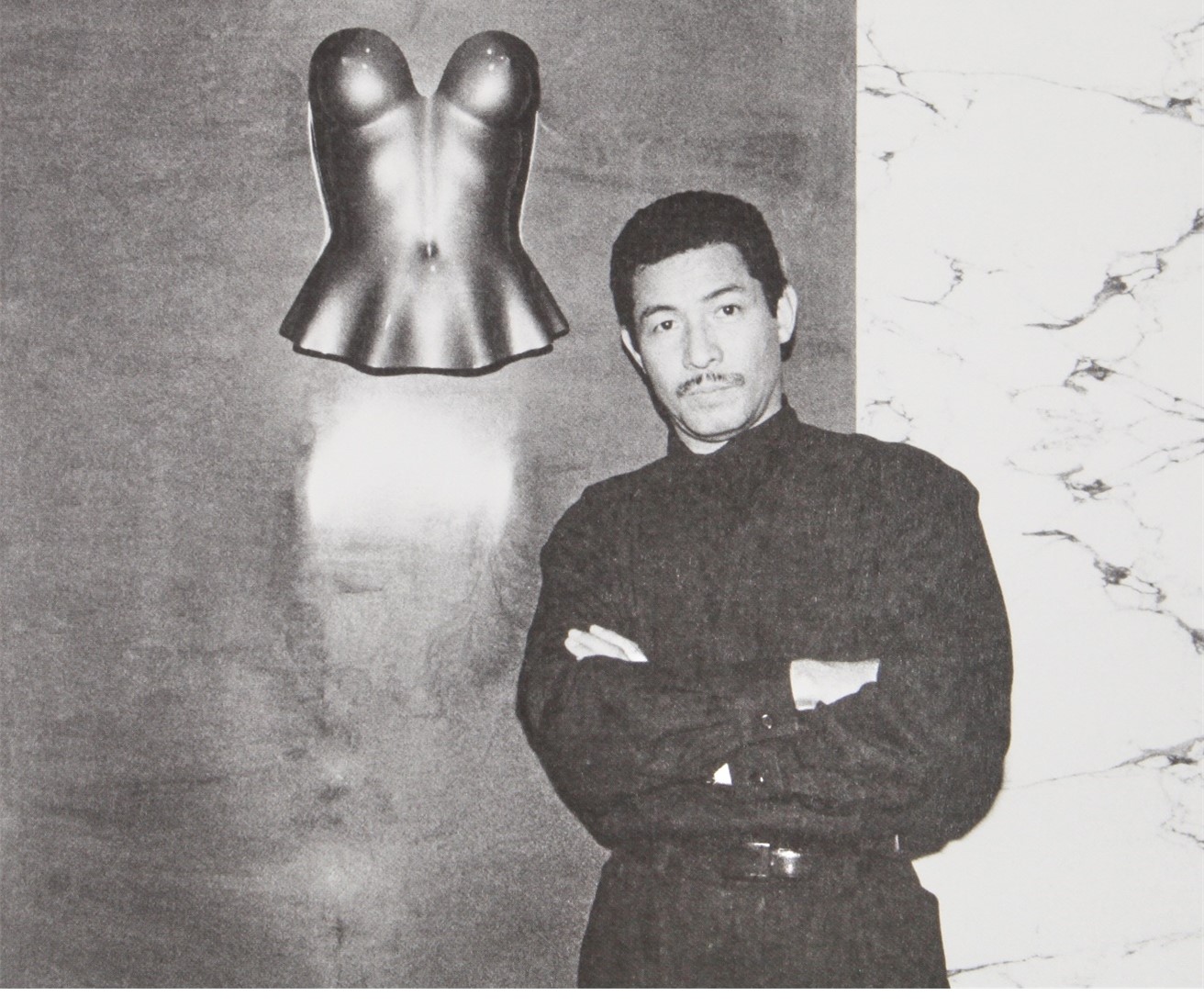 The designer photographed in front of one of his most famous designs on display for ‘Issey Miyake Spectacle: Bodyworks’, the exhibition at Laforet Museum Liguria, Tokyo, 1983

Artist and architect Isamu Noguchi observed: ‘I recognise Issey Miyake as an avatar. I see that what he has done has more to do with an attitude of warmth and ease - a way of accepting and giving - a generosity that disarms… it is not only the young who may need this, but the old who clothe themselves with a relief’ (1988, ‘Issey Miyake, photographs by Irving Penn’). For as bold an avant-garde as Miyake’s designs may be perceived to be, at the heart of his ethos was wearability and comfort: ‘Clothes are tools for living. They should be relaxing, convenient and useful’ (Issey Miyake - ‘Bodyworks’, 1983). 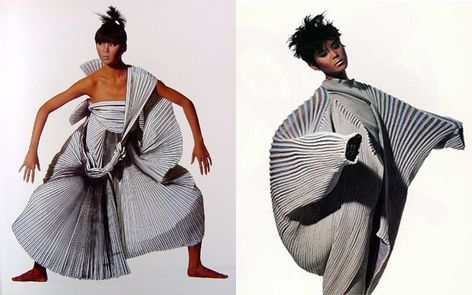 In 1988 the formidable talents of Issey Miyake and American photographer Irving Penn were united: the project resulting in some of the most impactful and iconic images of the designer’s work, pictured above

'I wanted the clothes to move when people moved. The clothes are also for people to dance or laugh' – Issey Miyake 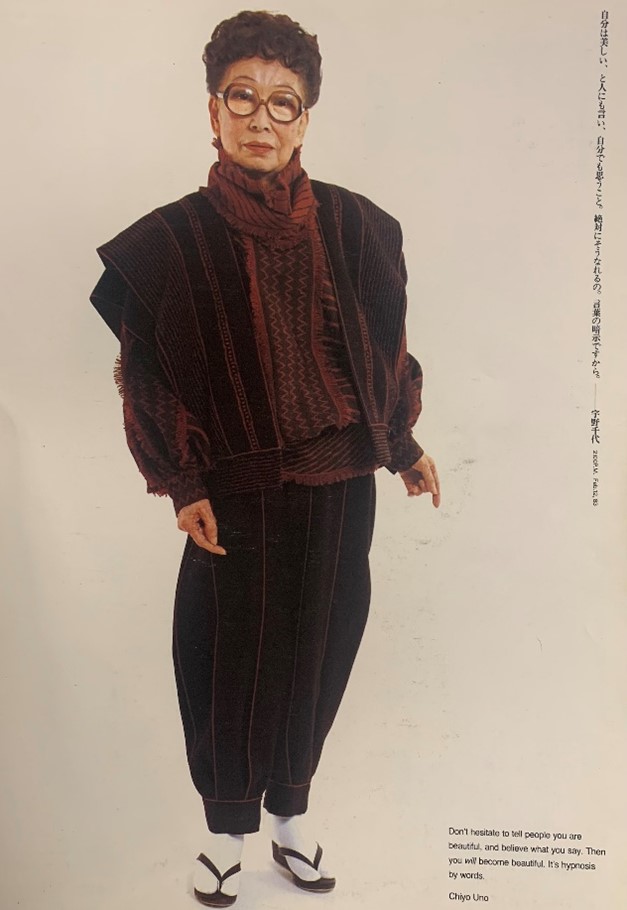 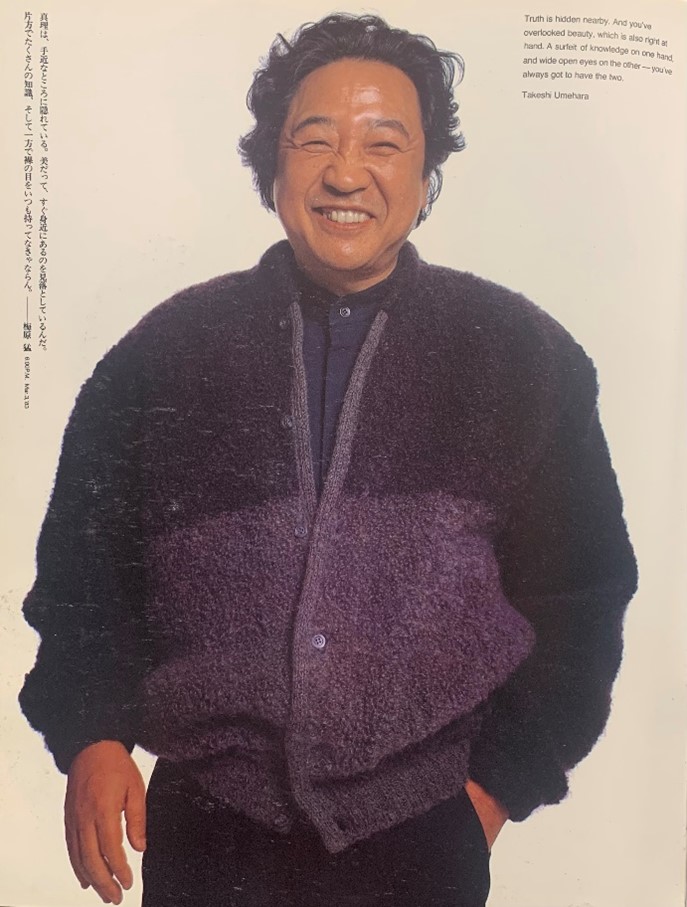 ‘Clothes are tools for living. They should be relaxing, convenient and useful’ (Issey Miyake - ‘Bodyworks’, 1983). Both images from the same publication

Despite acclaimed international success, Miyake retained a notable lack of ego throughout his life. Speaking in 1983, he commented: ‘After more than 10 years working in Japan, I think I’ve attained a certain level of achievement. But I object to being ranked by others. Prestige does not help me make clothes. There will come a time when I must begin to take apart what I have done… When I began my work, I only planned out what I wanted to do up to the age of forty. As I tell myself I’ll try for five more years, and then another five, I find I’ve passed the forty-year age limit. I enjoy growing older. I want to express this enjoyment in my fashions. I want to show that there’s meaning in my aging’ - (‘Bodyworks’, 1983). And that he did: a prolific designer who was continuously learning, with the decades which followed he was a pioneer in computer technology through his ‘Pleats Please’ and ‘A-POC’ lines, amongst others. 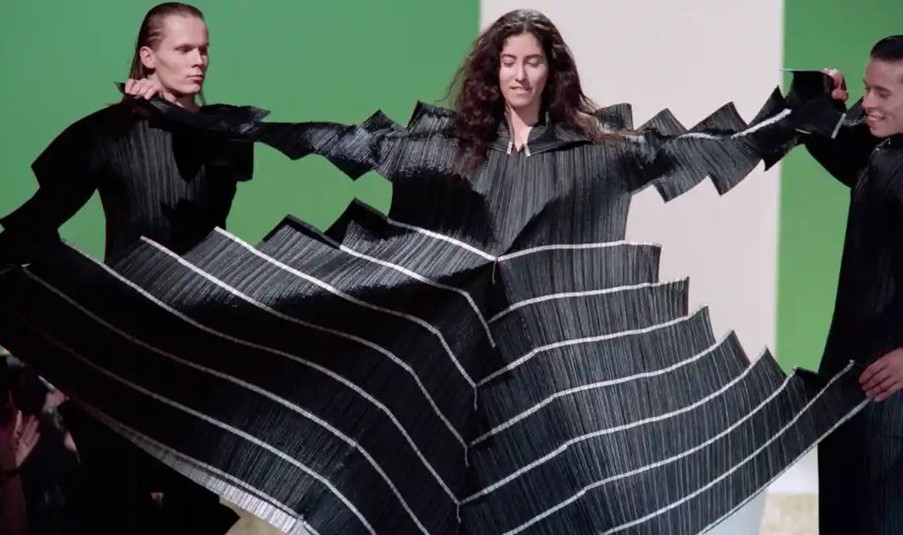 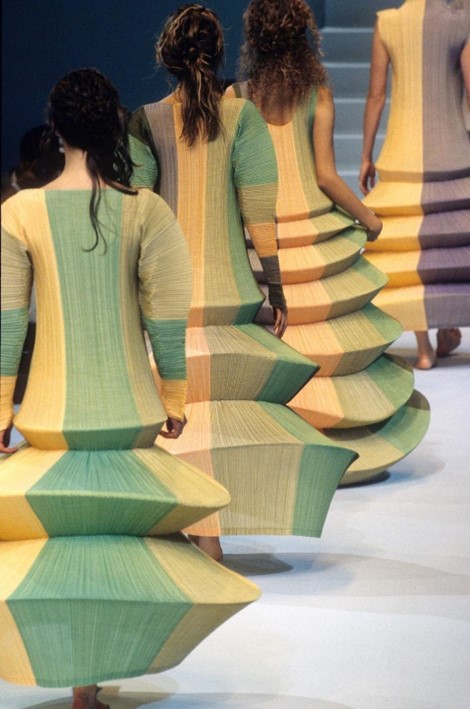 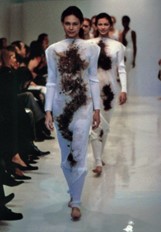 Models walk the runway in ‘flying saucers’ for Miyake’s spring-summer 1995 collection (left) and in ‘gunpowder’ dresses from his ‘Guest Artist’ series with Cai Guo-Qiang, 1998 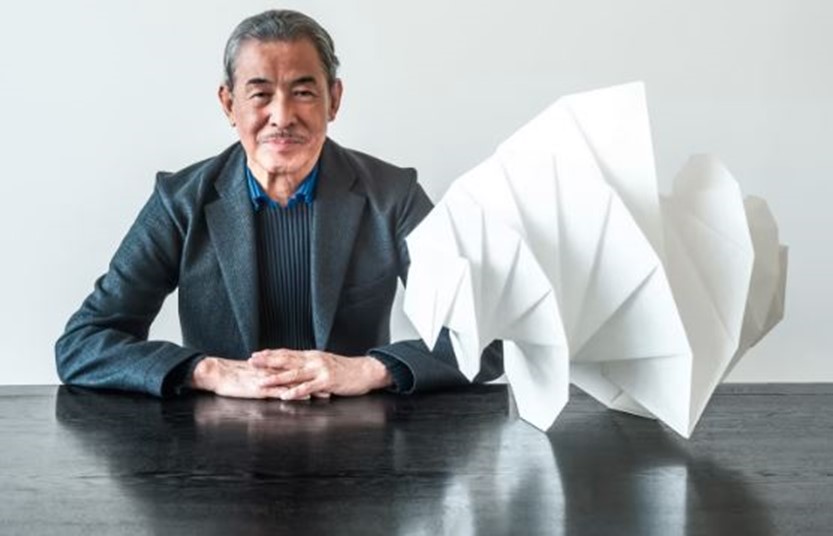 To the man who was ‘always thinking of tomorrow’ - thank you for your contribution to this world. And to the reader of this article, we leave you with this parting thought from his great mind:

‘I never give up my vacations. I always go abroad. I don’t think about anything but go swimming first thing every morning. Having said that we want a ‘delicious life’, we must now endeavour to make our lives beautiful, comfortable and pleasant’ 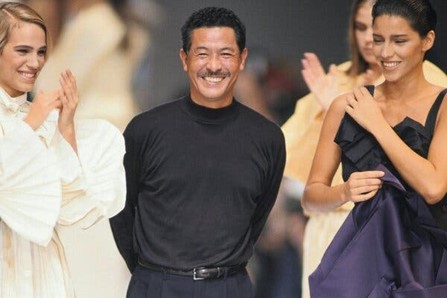