Treasures from the Sandy Schreier Collection

Sandy Schreier’s fashion collection is legendary. The Metropolitan Museum describes it as ‘One of the greatest private collections of 20th century fashion’, and they should know.

It is not only vast (some 15,000 items), but each piece has been selected with Sandy’s own unique taste and eye. She has always selected pieces that ‘spoke to her’ – key looks from runway collections, outstanding exhibition pieces, bold statements of style or garments she just adored for their exquisite beauty, craftsmanship or historic importance.

Fashion designers, curators and collectors the world over have begged for a peek at her collection – including Yves Saint Laurent, Karl Lagerfeld, Oscar de la Renta, Hamish Bowles, Pierpaolo Piccioli, Stephen Jones, Zandra Rhodes, Michael Kors and Isaac Mizrahi, to name but a few. Even then, they would be shown just a handpicked fraction that Sandy thought would interest them. Her reputation grew because of her frequent TV appearances, speaking engagements and her books about another of her favourite subjects: film costuming.

I have known Sandy since the 1980s, meeting her late husband Sherwin, her children and grandchildren, and even I have only seen a fraction of the whole collection. I’m her fashion pen pal – so from time to time she sends me tantalising images of some of the hidden-away treasures which are amazing. Over the decades, Sandy has loaned pieces to major museum exhibitions - from the Louvre and Russia’s Hermitage Museum, The Met, The Art Institute of Chicago to the Detroit Institute of Arts in her home town, who presented ‘CHIC TO CHIC: 100 Years of Fashion Accessories’ in 1992, which broke all attendance records.

Last year the general public was given the opportunity to see up close some of the glories of her collection in the exhibition ‘In Pursuit of Fashion, The Sandy Schreier Collection’. The Metropolitan Museum mounted 80 fabulous pieces from Sandy’s generously promised gift of 165 garments. The show, which ran from fall 2019 - fall 2020, was arguably one of the most beautiful shows ever staged (with headpieces by Stephen Jones and designed by Nathan Crawley and Shane Valentino). It showcased the best French haute couture by all of the ‘Masters’ through to the most important American designers (on which she is an unrivalled expert), as well as eye-grabbing contemporary fashion.

Sandy is a born collector and began as a child in Detroit in the late 1930s. She was a pioneer in this field and was sometimes considered a little odd by the grown-ups for her fascination with vintage fashion. They couldn’t understand why she wanted to save these old clothes and didn’t just want to use them for dressing up.

‘People still ask how I resist trying things on - all I know is I thought that everything looked so beautiful that I wouldn’t want to touch anything.'

She didn’t grow out of her passion, which only increased with the passage of time. Unlike many collectors – Sandy has never worn pieces from her collection, regarding them as works of art deserving of respect, admiration and preservation.

At a time when collecting fashion was not really fashionable and no-one else was really doing it, she began with gifted pieces from the auto titans' wives, who were her furrier father’s clientele, and also pieces procured from some of the Hollywood stars such as lot 88, the 1943 Adrian dress owned by Joan Crawford, or from old family estates, at a loss as to what to do with these ‘old clothes’.

The Metropolitan Museum exhibition gave Sandy the chance to properly exhibit and share her collection with others, which she greatly enjoyed. This has prompted her to release a few of her ‘children' - as she refers to them - to auction, rather than leave them boxed-up, away from the public gaze. We are very proud that Sandy has chosen Kerry Taylor Auctions to assist her. Ultimately, Sandy is an inveterate collector and needs to find space for new acquisitions. But it’s not been an easy process - each of the 24 lots included in our auction has been an agony for her to part with. She has chosen a wide range of pieces that reflect her collecting tastes - to name just a few: 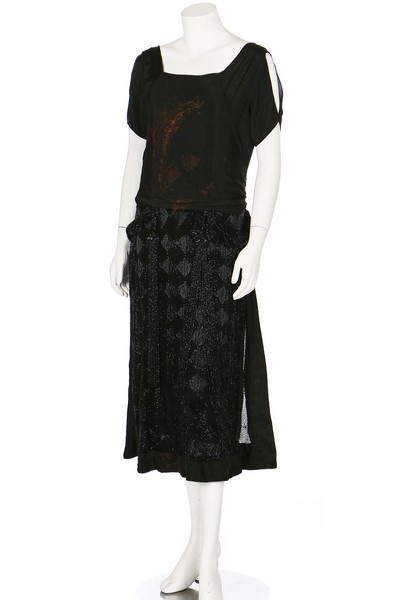 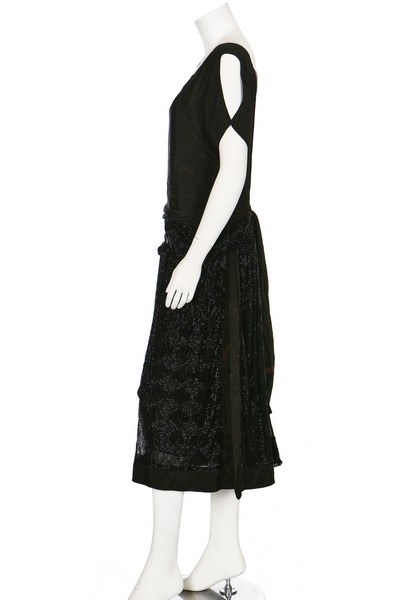 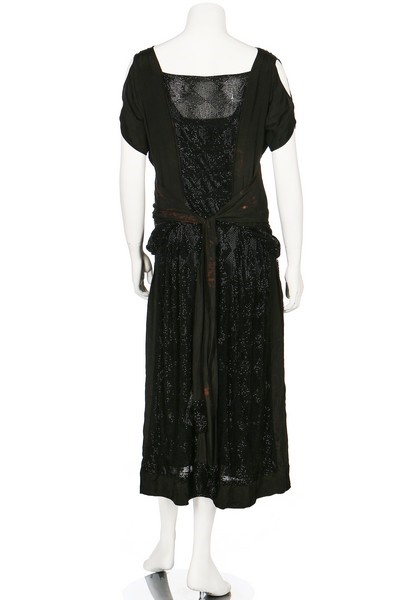 One of her rare couture Chanel pieces is lot 74, one of the earliest extant ‘Little Black Dresses’, labelled Gabrielle Chanel 1921 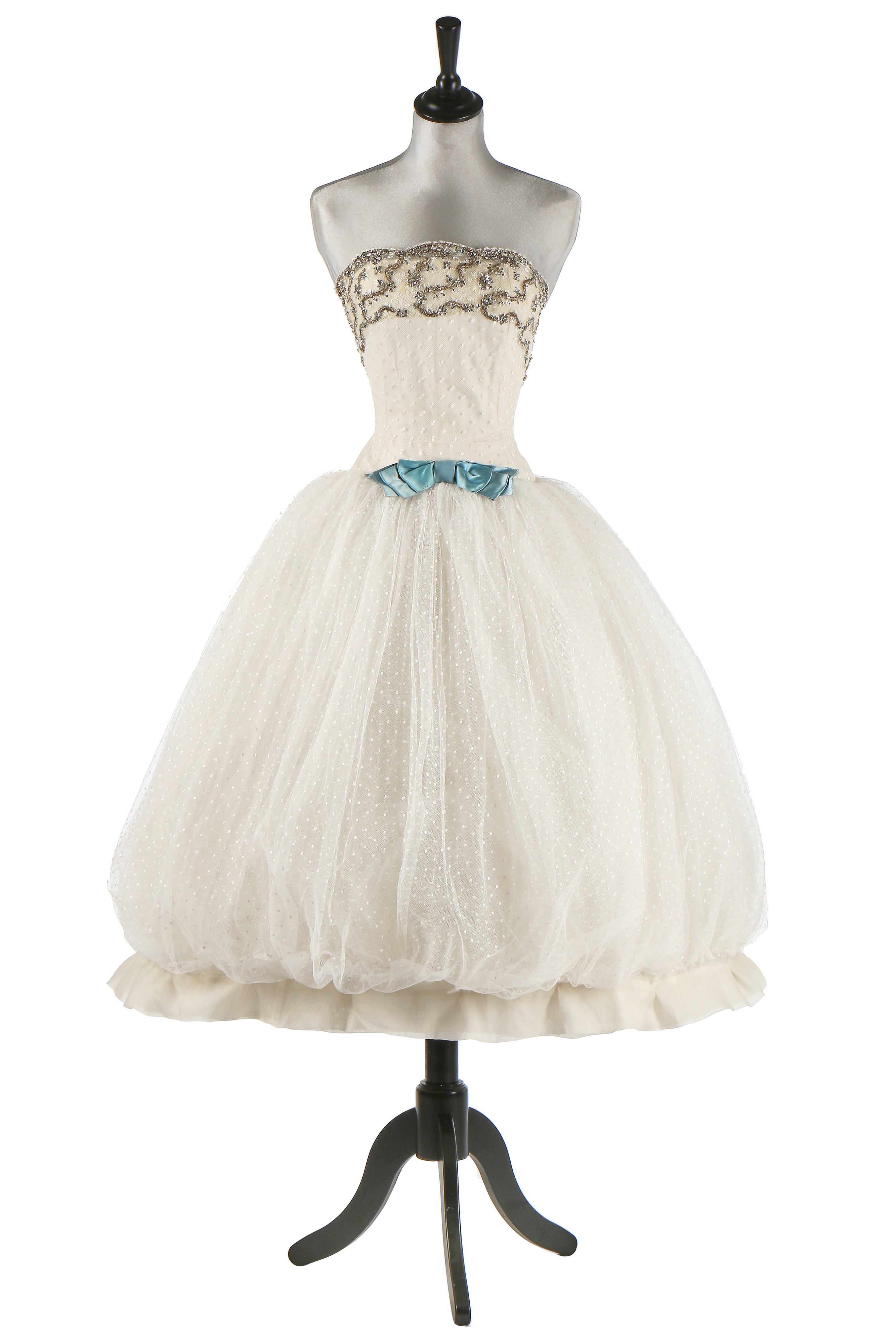 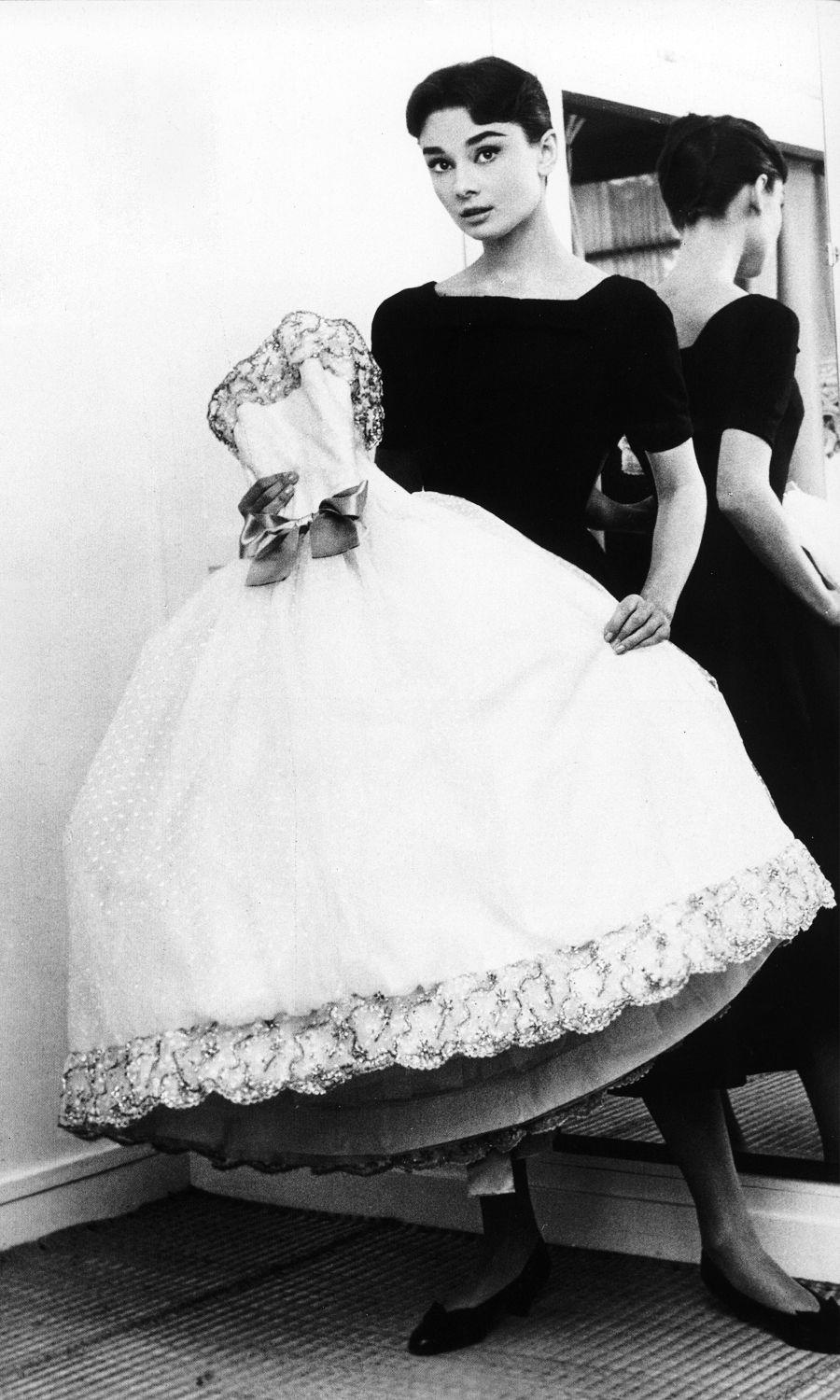 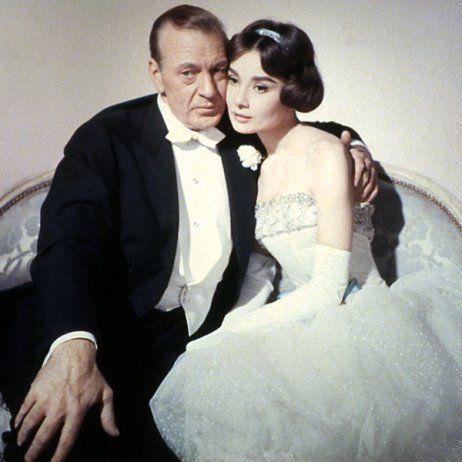 Lot 79, a romantic Chanel couture embroidered organdie white summer gown from 1934 with criss-cross lacing and large butterfly bow to the back 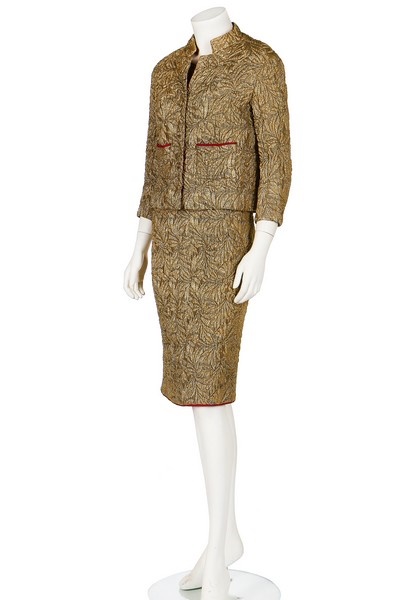 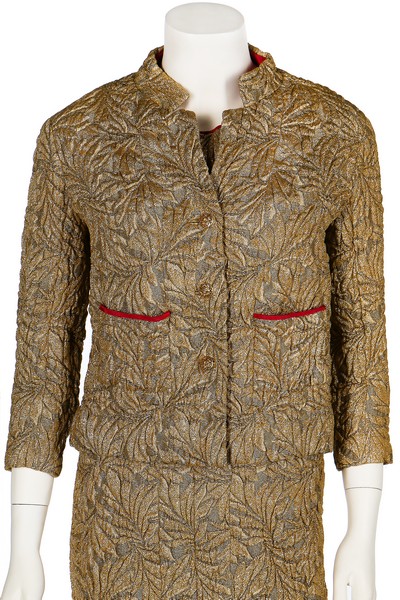 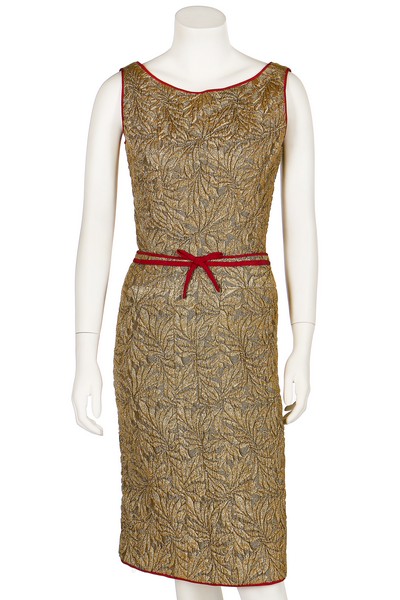 In addition, we have haute couture and fashion by Poiret, Boué Sœurs and Vionnet from the 20s; Molyneux, Lanvin and Worth from the 30s; Gilbert Adrian and Madame Grès from the 40s; Fath from the 50s, Balenciaga and Galitzine, Laroche, (more) Chanel from the 60s, Capucci, Givenchy and Lagerfeld for Chanel from the 80s, Moschino from the 90s and Issey Miyake from 2003. 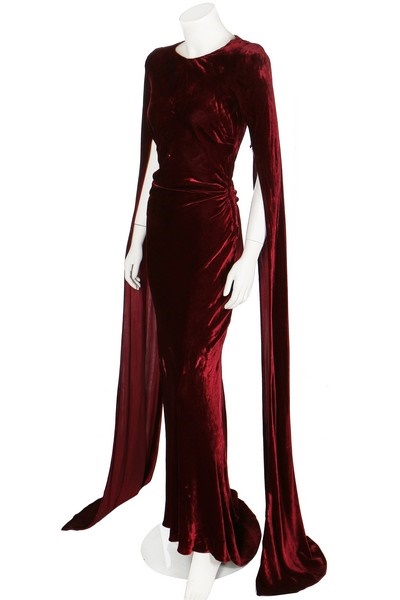 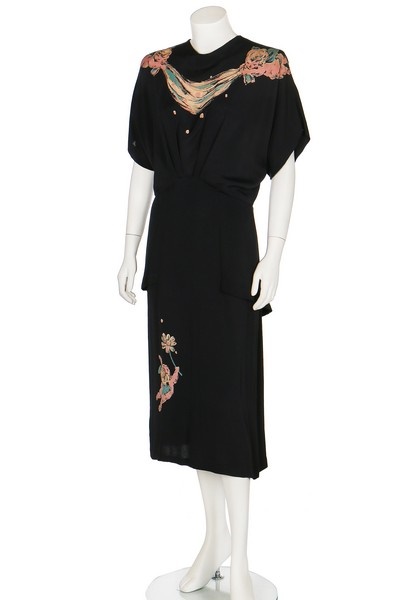 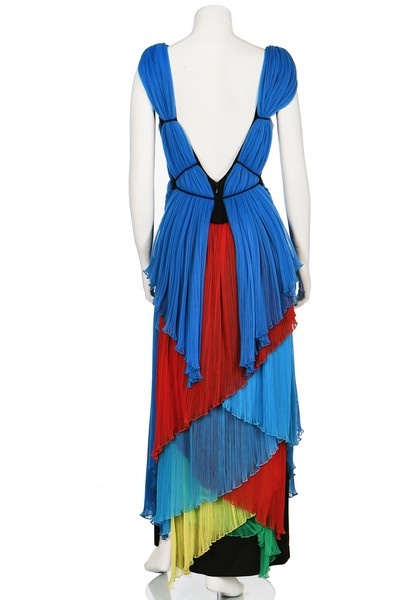 Although it must be acknowledged that by now Sandy must have just about everything she could want fashion-wise, she still gets tempted and so we hope our auction provides just a little more space in her archive as this show must surely go on! As Sandy once said,

'This is my life’s work and my passion. It’s been a joyous ride and I’m not finished. I started doing this when I was 2 ½ years old, so it’s IMPOSSIBLE to stop.' 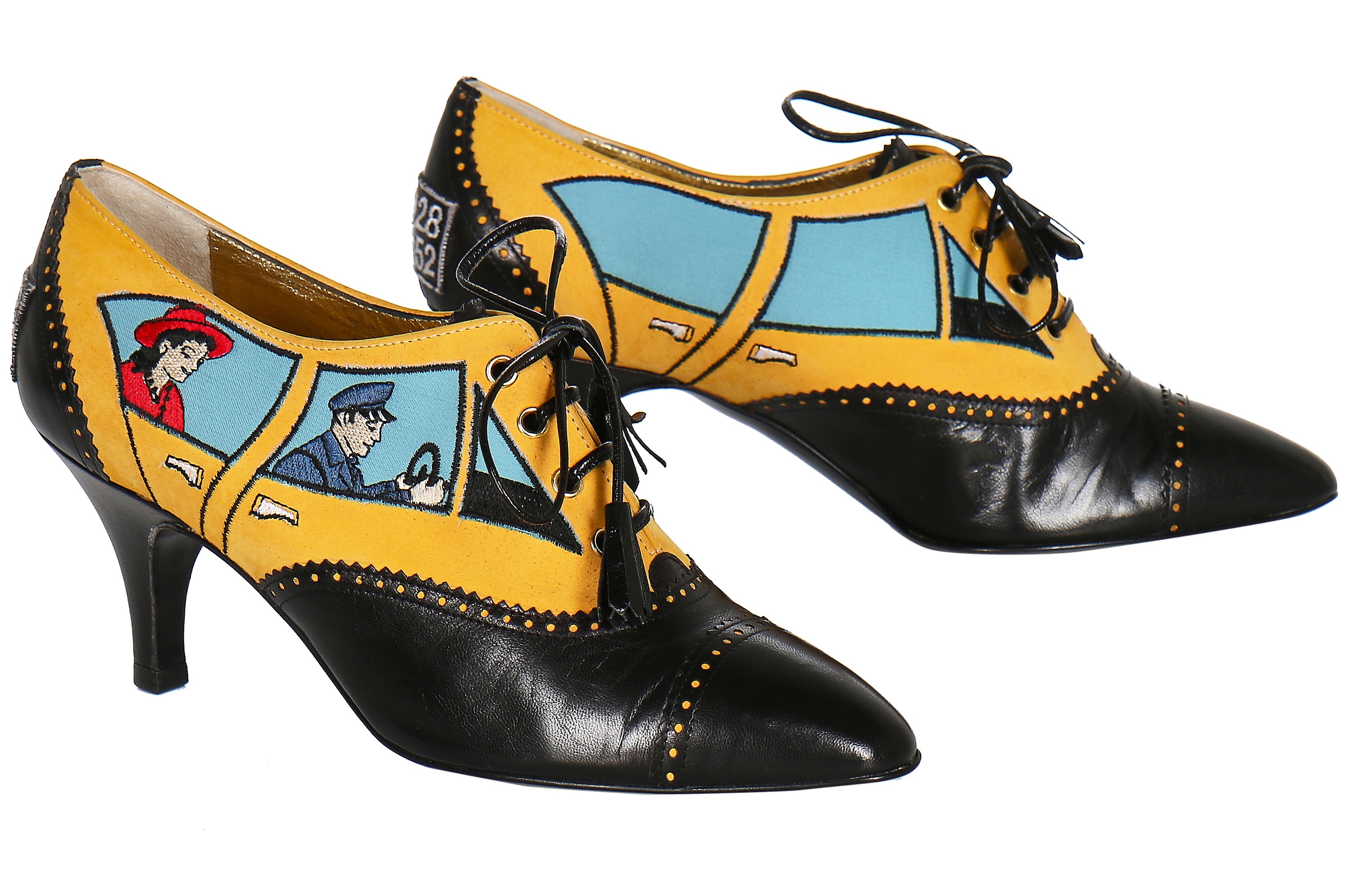 The Sandy Schreier Collection in Passion for Fashion, 8th December 2020: