A rare and important Natalia Goncharova for Myrbor futurist appliquéd cocktail dress, circa 1924-25, sold for £15,000 including buyer's premium. Unlabelled, the crêpe de chine ground applied with abstract metallic panels, richly-coloured silks and velvets, with triple tiered flounces to one hip embroidered with gold thread bands, the dress also has small weights which hold the waistline in place to the interior, bust approx 96cm, 36in.

Natalia Goncharova (1881-1962) was a leading Russian avant-garde Cubo-Futurist artist. In 1898 she entered the Moscow School of Painting, Sculpture and Architecture and here she met another major artist who was to become her lifelong partner – Mikhail Larionov. Together they became leaders of the Russian Futurist movement. Her Neo-Primitive style was heavily influenced by Russian folk style and Byzantine art. Paintings by Goncharova are also highly desirable and command high prices at auction. 'The Flowers' sold at auction in 2008 for $10.8 million - one of the highest prices ever paid for a female artist's work.

The famous Russian impresario Serge Diaghilev commissioned Goncharova to design ballet sets and costumes – the first being for 'Coq d'Or' in 1914, followed by ‘Liturgie’ in 1915. She also re-designed several ballets for him, fusing her Russian folk art style with her more abstract Futurist style for ‘Les Noces’ in 1923 and the 1910 ‘L’Oiseau de Feu’ for the 1926 revival. 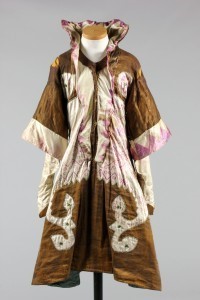 In the early 1920s she and Larionov moved to Paris in the wake of the Bolshevik revolution and the First World War.

Between 1922 and 1926, Goncharova designed dresses for the Paris interior design and fashion house Myrbor. Goncharova's designs for Myrbor first appear in French Vogue in 1922 and continued until 1926. Her clothes combined contemporary fashion with cutting edge cubist/futurist patterns. She employed strong Slavic inspired colours in her clothes and adorned them using striking abstract appliqué patterns in shimmering metal fabrics, coloured silks and velvets. Myrbor, although Russian-sounding, was the brainchild of a Frenchwoman - Marie Culloti, the wife of an influential French statesman. Situated on 17 Rue Vignon, Paris, the shop sold not only fashion but interior design, with rugs and tapestries designed by such luminaries as Braque, Leger, Miro and Picasso. Goncharova's designs for Myrbor are a fusion of fashion with the prevailing Russian Cubo-Futurist art movement of the day.

Few of these dresses have survived and of these even fewer are strong enough to be displayed on mannequins - the Metropolitan Museum has four garments, the Victoria & Albert Museum includes a very similar gown in its collection, inv.329-1968.